Why do these notes have two sets of beams?

I'm puzzled by the bar ringed in red from a piece for Celtic harp (La danseuse T'ang, in Images de Chine, by Monique Grabus).

There are two sets of beams, and every note has both an upward stem and a downward stem.

My harp teacher advises me to play it as a phrase flowing between the hands, which works fine; but I thought that would be notated like this: 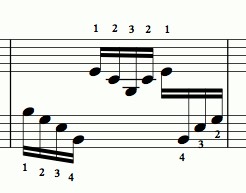 which is much simpler.

Is there a specifically French convention? or have I misunderstood what's intended?

You will notice that the beaming in the top and bottom is different. The top beam groups the notes depending on which hand is used - first left, then right, then left (4 notes, 5 notes, then 3 notes). The bottom beam indicates the desired phrasing. Very subtle I must admit, but that's the only reason I can see for this being written in such a way.

At first glance this can be puzzling, and people mentioning phrasing are on the right track, but the answer here is a bit more specific: the up-beams and down-beams indicate hand allocation as well as clarifying the metric subdivision for that measure. In this instance the hand allocation subdivides the measure from 6+6 to 4+5+3. The center beams indicates original metric subdivision (showing the measure divided into 2 equal parts of 6 16ths; the likely time signature here being 6/8.)

This was likely done because either the composer, engraver, editor, or publisher felt that the music would have not been as clear. I have not seen this notation much, so it may be specific to this editor/publisher/engraver/composer.

Personally I think it would have been much clearer leaving out both upper and lower beam grouping: after all, that's what happened in the measures before.

The stem directions can also be used to indicate which of four parts harmonies are being expressed, soprano, alto, tenor and bass.

Perhaps the software program printing the notation got confused and used this notation when it wasn’t warranted. I

Not the answer you're looking for? Browse other questions tagged piano notation harp beaming or ask your own question.

6
In the Hanon piano exercises, why is there a beam joining two groups of 16th notes?
6
Why are these quavers beamed this way?
2
Ties - is there a distinction between these two notes?
6
Two sets of fingerings printed for one same bar?
6
How to calculate notes beats and properly draw notes beams?
0
How do you "think of" notes in groups which consist of a sequence of repeating notes which are in separate beams?