Why do we base a barre chord on two different shapes ? Is the E shape more important than the A shape ? Why can’t I use the E shape all the time ?

Use the E shape barre all the time if you want. It's not a problem. Until about the fourth or fifth song in, when it starts to sound boring, because it's so samey.

Your premise that barre chords are based on two shapes is flawed. They're based on many shapes, and for me at least, the 'caged' system makes sense in that respect. Reasoning is that each of the open chord shapes, C, A, G, E and D can be transferred to anywhere else up the neck, by using a barre behind, just as the nut was. So, for example, in your case, an E shape on 3rd fret barre produces a G chord. However, using the C shape, barred at the 7th fret give G; the G shape, barred at the 12th fret gives a G; and a 4/5 string barre at the 5th fret gives a G when you use a D shape. Not forgetting 10th fret barre A shape for yet another G.

With all this choice of different voicings, the sounds made are more interesting, at least.

Another problem with only using an E shape is that there's a lot of movement required at chord change times. This makes the rhythm sound amateur, with, in a lot of (self-taught) guitarists resorting to strumming a lump of open strings while they move positions. Unnecessary, and not sounding good.

Having said all that, the E shape may be construed as more important by some, on the basis that it's a full 6 string chord in root position, thought often as the most stable. Whereas the A shape can be played with all 6 strings, giving the 2nd inversion, but often advocated to be played without the 6th string. So, only 5 strings as opposed to 6.

Basically any chord played as an open chord can be played as a barre chord if you think of your barre finger as a capo.

I found the E shaped Barre Chord the easiest to play but quickly learned its limitations when I decided to learn to play Takin Care of Business by Bachman Turner Overdrive. The chords are C Bb and F - all Major but it sounds more authentic to to mix in a 6th with each chord in your strum pattern.

For those who may be wondering why there are not 7 shapes for Major Barre Chords let me explain.

Major chords that can be played on a 6 string guitar in "open position" (meaning some open strings are used as part of the chord) are A, C, D, E, and G (all major). Of course some of these chords may also be played as minor or 7th chords in open position as well.

Thus the only unique shapes for Major Barre Chords that can be moved up and down the neck are A, C, D, E and G or if you prefer a mnemonic device you can remember these by changing the order to make the word CAGED. 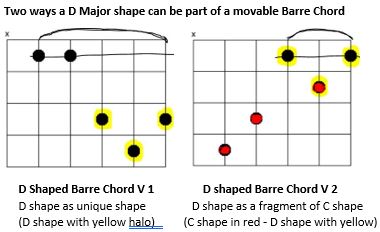 The C, G and D shapes are not as popular for movable Barre Chords as the E and A shapes because they require a stretch across four frets (versus 3 for the E and A shape) between your barre finger and the other fretted notes in the chord.

In summary, I would encourage you to incorporate the A shape Barre Chord into your arsenal as you advance in your guitar skills. I believe you will find that it gives you more options to make certain chord progressions both easier and more interesting. The link provided above may help you find the method of playing the A shaped Barre chord that works best for you.

Good luck and keep learning and expanding. Improving your guitar playing is a lifelong process. Enjoy the journey!

One reason not to play chords too high on the fretboard, as you might end up doing if you only know the E shape, is that the higher you fret a string, the less 'ideal' the harmonic series it produces (because as you fret higher, it gets thicker in comparison to its length). So if you play D# with the E shape barred at the 11th fret, you may get a less 'pure' sound than A shape barred at the 6th fret.

On many guitars, it's also quite difficult to play barre chords high up the neck - the action is likely to be higher towards the 12th fret, and on some instruments (such as classical guitars), the lack of a cutaway may be a hindrance.

In summary - in some circumstances it may be easier, and sound better, to play using the A shape.