I came across something odd shown in the picture below.

(What this is from is not very relevant, but in case your interested: I'm building a simple phone app that would allow me to practice particular ear training exercises without requiring any user input so that I can practice while cleaning, walking, driving, etc. The app Functional Ear Training is great but lacks a few features I'd like. Anyhow, there's a programming library for the Python language called Mingus. The picture below is from the documentation explaining the use of the library.)

If I understand the passage correctly, it's showing E triad chords but in different keys. It's saying that in the key of E, as expected, E major is E G# B, but in the key of C it's E G B, and in the key of F it changes yet again to E G Bb. I thought an E major triad is always E G# B, but perhaps this picture is discussing something I'm unfamiliar with or maybe I misunderstand how major chords work?

The link to the documentation page is below. This description is only a couple short paragraphs down the page, so you'll find it quite quickly if you want to read it in context: 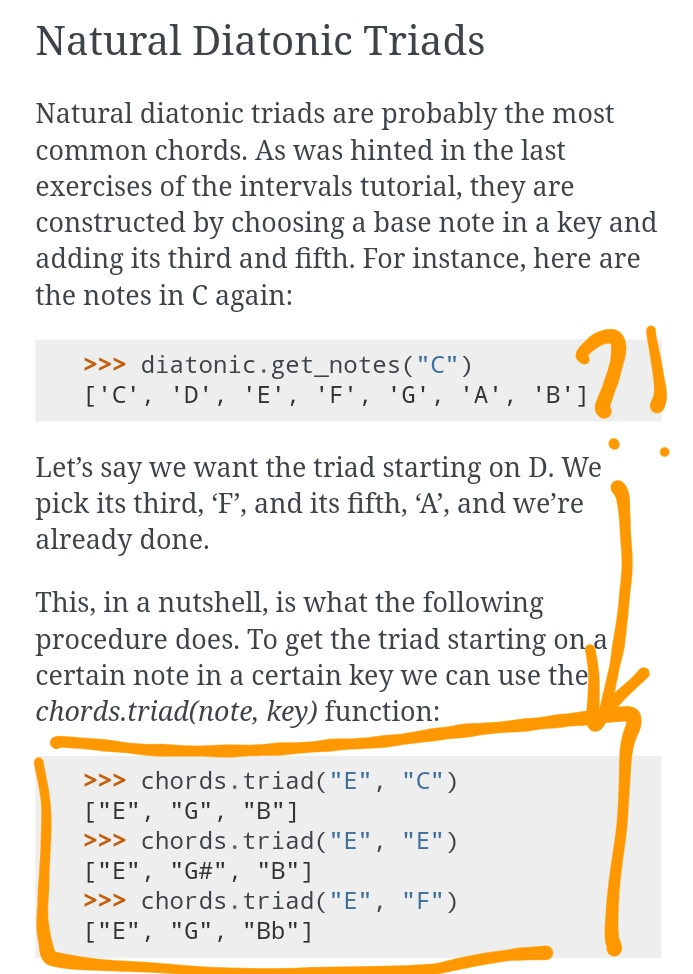 I thought an E major triad is always E G# B

That is correct. The notes comprising an E Major Triad are always E-G#-B - irrespective of key. However, the notes comprising a diatonic triad whose root is E do vary depending on the key. The cited illustrations are not only of E major triads, but several different types of triads with E as their root. (The root is the base note of the chord - the first note in the series when describing a triad in its 'default' configuration - iterating through its parent scale in order. This configuration is known as the First Inversion).

Your question arises because you are unclear about how intervals are defined and named, and how the resulting different sorts of triads are built from these intervals. This subject is a source of much confusion among many new to music theory.

There are several good answers on the site explaining the basics of interval definition. I wrote about it here: Are intervals like major 3rd, minor 3rd, and major 2nd all based on the scales, or are they based on how many semitones they have? - so I remember this answer, but there are others as well, as good or better than mine.

Cutting to the chase for the purpose of answering this question, here are the rules you need to know:

Now for your specific examples:

Diatonic in this sense means that we use only the notes of the key in question to build the triad. That is the meaning of the text you posted: Natural Diatonic Triads.

So: chords.triad(E,C) == E,G,B - a triad comprised only of notes of from the key of C major. However, this is an E Minor Triad, because E->G is a minor 3rd and G->B is a Major 3rd - as per the second item in our list of triads.

But: chords.triad(E,E) == E,G#,B - a triad comprised only of notes from the key of E Major. In that case this is an E Major Triad, because the first 3rd is major: E->G# is a major 3rd and the second 3rd G#->B is minor- as per the second item in our list of triads.

Lastly: chords.triad(E,F) == E,G,Bb - a triad comprised only of notes from the key of F Major. In that case this is an E Diminished Triad, - as per the fourth item in our list of triads - because E->G is a minor 3rd, and from G-Bb is also a minor 3rd. Bb here is called a diminished 5th - meaning it is one half step lower than the perfect or 'normal' 5th - it is a 5th that is reduced-diminished in size and diminished gives this triad its name, to distinguish from the minor triad.

What the example you show fails to explain is that there are four different types of thirds, as Rockin puts in his answer. Yours merely says glibly 'adding its third and fifth'. If it had explained better, you wouldn't have posted the question, true?

To answer your header: No. An E major triad will always be the same three notes, E G# B, in any order, with doubles on some instruments, regardless of what key a piece is in. A triad with E as one of its notes may well have the other two different, dependant on key, but by then, it's obviously not going to be called E major.

Thanks for the link. I looked through it - much as a teacher checking homework - it's in the blood ! - and one omission is a sus2, there's a sus4 included. Not come across the term 'absolute' triads, and wonder if it's necessary. I think all triads would fit into the group, diatonic or not. and it's not a particularly descriptive term.

Not the answer you're looking for? Browse other questions tagged chord-theory key or ask your own question.

9
How do you build a major chord?
7
Are intervals like major 3rd, minor 3rd, and major 2nd all based on the scales, or are they based on how many semitones they have?
5
Defining intervals.

17
Why does the chord progression Dmaj -> Emaj -> Bmaj sound good?
1
Exhaustive list of chord (at least triad and dom7) functions for a software ear training tool
5
Dominant seventh chord in the major scale contains diminished triad of the seventh?
8
Why is a major key called major?
0
Triad improvisation, Key centers
10
What function does an E major chord serve in the key of C major?
4
Does the same key have both major and minor pentatonic notes?