Pitch perception: What allows us to uniquely identify a musical note?

If I start on a musical note on the piano and play out the folllowing harmonics/overtones I can find all the notes in the chromatic scale via the harmonic series eventually. Does that mean that every note on the piano contains all the other notes via its overtones? If so what makes a note unique?

Edit: Lets say A2 (110hz) for a refrence to the musical note. Im more curious about the difference of pitch than timbre. Incredible grateful for all comments that help clear up the issue

If I start on a musical note on the piano and play out the folllowing harmonics/overtones I can find all the notes in the chromatic scale via the harmonic series eventually.

Have a look at the table here. That's a list of all the notes in the chromatic scale (within some range, using some reference pitch, and some particular temperament).

Does the harmonic series based on any fundamental contain all those pitches? No, it doesn't.

Does that mean that every note on the piano contains all the other notes via its overtones?

No. The harmonic series will contain notes of all the different names. It doesn't contain "all the notes", in the sense of all the actual pitches that correspond to notes in the chromatic scale.

what makes a note unique?

Simplistically speaking, and assuming that you are interested only in pitch and not timbre, the thing that makes a note unique is its fundamental frequency. If you're talking about timbre, I refer you to Dave's answer :)

A sound is a variation in the pressure of the air.

That variation in pressure can be depicted as a waveform.

Not all sounds have a particular 'pitch'. A sound that has a pitch is one whose waveform repeats, like this: 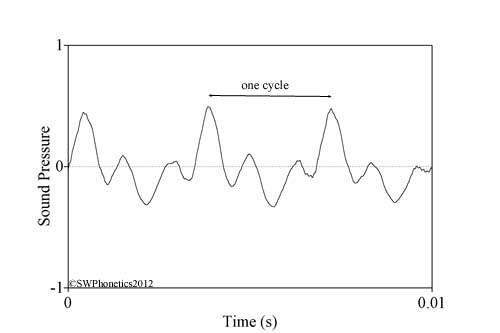 We can see that the "one cycle" marked by the arrow repeats again and again.

Now, the pitch of the sound that we hear depends on how frequently the waveform repeats - we call this the frequency.

And that frequency of the sound is is, simply speaking, the answer to your question - that's the thing that governs the pitch that we hear.

So why do people talk about the harmonics of a note, if they have nothing to do with the pitch?

One reason is that the harmonics are important in how the ear recognises frequency. Our ear can't look at a graph, the way we just have.

What the ear does is make use of a different way of representing a sound - not as a pressure waveform changing over time ("time domain"), but as a set of different frequency components ("frequency domain").

The best way to understand this is to try it yourself. Go to https://meettechniek.info/additional/additive-synthesis.html and play with this: 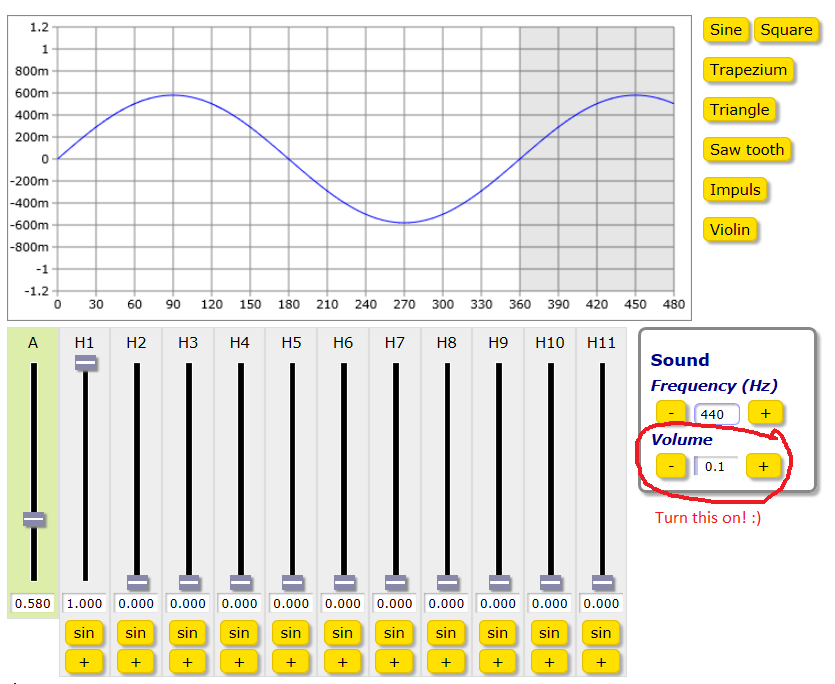 The above shows a wave that has only the fundamental frequency - no harmonics (this shape is called a sine wave). 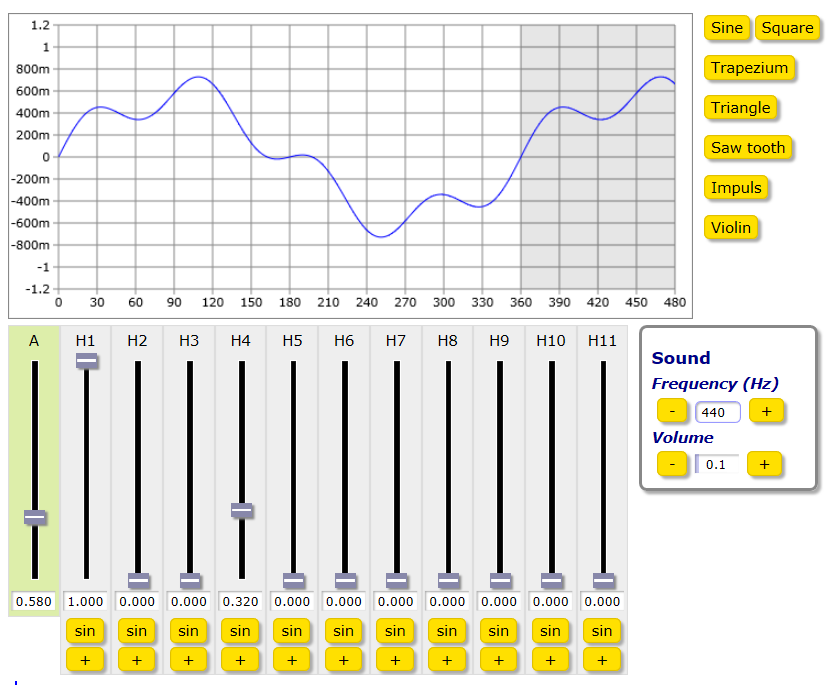 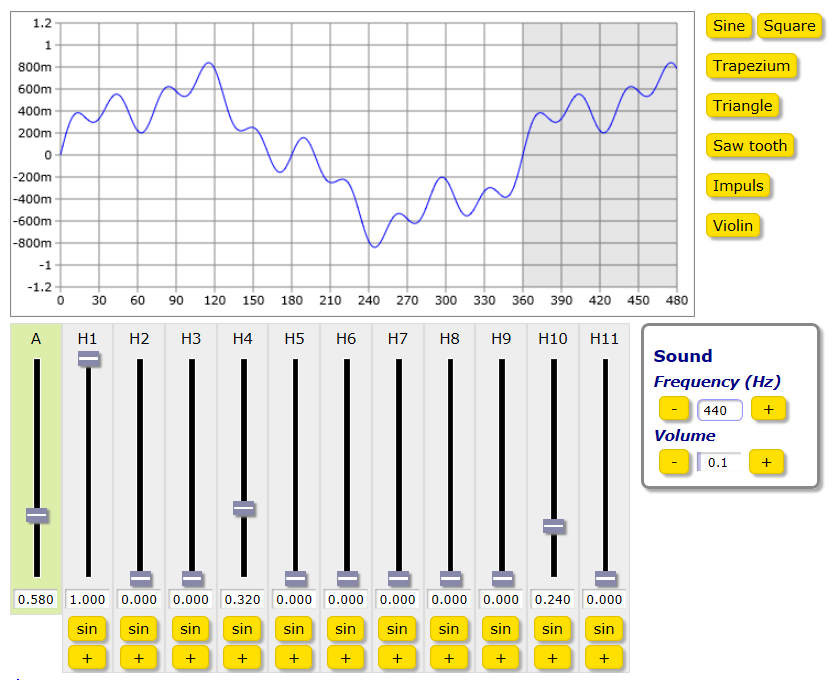 In these pictures, the graph at the top is a time-domain view of the shape of the waveform, while the sliders at the bottom show the frequency domain view - how much energy is in each harmonic. An important thing to notice is that the harmonics are all multiples of the fundamental frequency. H1 is 440 Hz, so H2 is 880 Hz, H3 is 1320 Hz, and so on.

The ear can measure these different harmonics as there is a special structure called the Basilar membrane allowing it to do this: 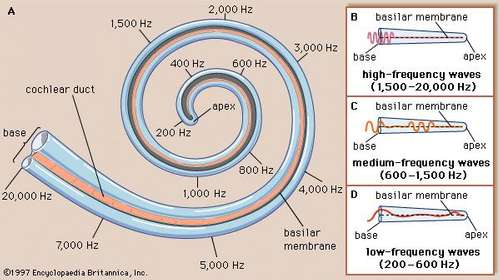 So how does the ear know what the fundamental frequency of the note is from the harmonics?

Because of this, notes with very different harmonic structures can still have the same pitch: 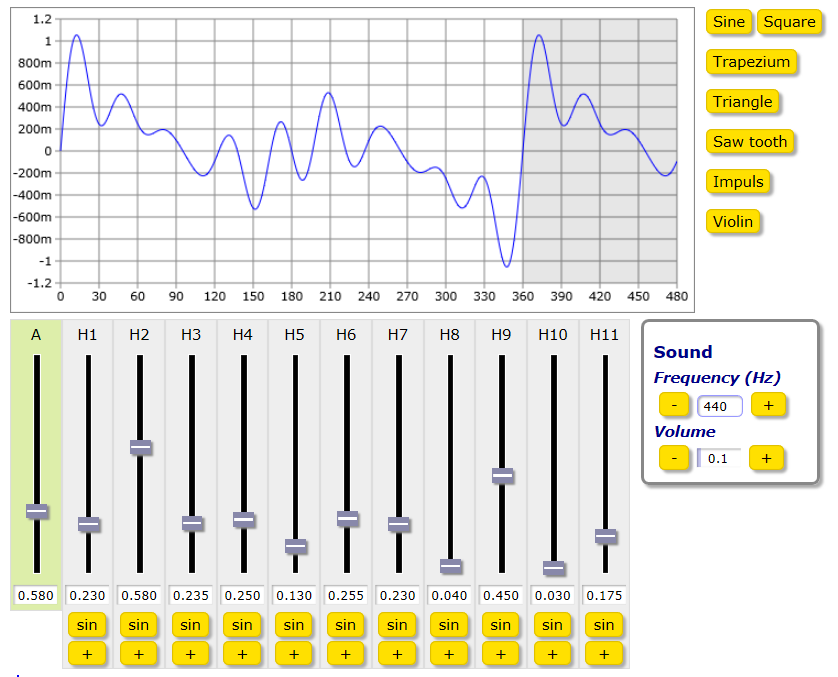 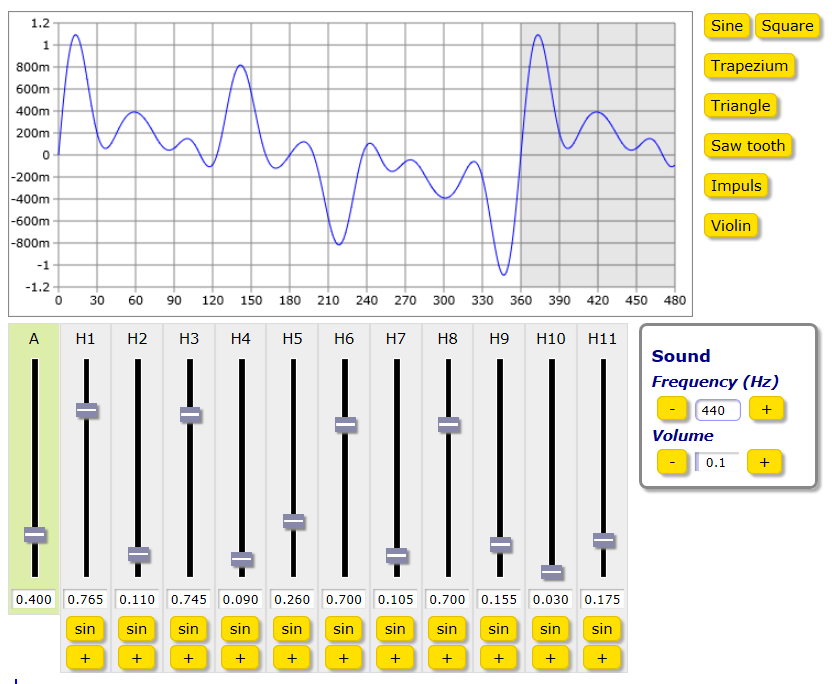 This video shows much better how the pitch of the sound we hear depends on the frequency of the wave (how quickly it repeats):

So, putting this all together:

So I don't think it's really useful to think that a note 'contains' other notes because of its harmonics - that's not how the ear works. It groups the harmonics into sets related by frequency that we then hear as single notes.

To me this is akin to asking "if all of images on our screens are just red, green and blue phosphors, how are there different colors?" (the same kind of question can be asked in terms of mixing pigments). It is in the fact that there are different mixtures of the different components. So, in terms of the harmonic content, it is the relative amplitudes (and phase) of the different harmonics that affect the perception of pitch and timbre.

In principle, it is the entire wave train that makes a sound unique. Although there is a 1-to-1 correspondence between the wave train and the harmonic content I like to start in the time domain; aspects like onset transients, the how a note decays and whatnot are easier to think about in terms of when they occur and how they last in time. The percussive attack of a piano is distinct from a slow onset violin note of the same pitch. Other kinds of differences, especially the perception of "texture" in sustained notes are more obviously reflected in differences in the harmonic content of the note, c.f. this video for a comparison of some idealized waveforms.

59
Why Is Just Intonation Impractical?
13
How does the harmonic series affect consonance?
5
Understanding and distinguishing piano slurs and phrases
7
In a musical note (A for an example) are all the other frequencies harmonic?
2
Note sounds off - Beginning-Intermediate Piano player
6
How do ratios work within the harmonic series?
12
Playing saxophone without using the octave key
44
Does the difference in harmonic series between instruments have a significant effect on the consonance of the sound?
6
How do you notate a tremolo of indeterminate length?