I have a weird "problem" I recently bought an ESP ltd les paul style guitar with a Duncan JB pickup on bridge. Yesterday while i was practising with my headphones and with full hi gain distortion i noticed that especially on high strings the moment my pick "touchs" the string to make an attack i get a quite loud pick "harmonic" kind of sound. SO loud and melodic that it feels like a note in advance added to my actual notes! Actually thats NOT an annoying sound or noise, its a bright sweet harmonic, but eventually that does not belong to my solo!!

I dont get this on my neck pickup(Duncan 59) and this is less noticable when doing alternate picking on same string, but it becomes quite annoying if thats sweep picking since there is single note on every string and when I am starting an upward sweep from high E, my arpeggio starts with the "harmonic" of my pick touching the string before I make any attack on the string. This is not about my technique cause when I simply and very lightly touch the string with my pick I can still get this harmonic as if I made an artifical harmonic.

Is this a known issue for all hot hummbuckers? some people say bridge pickups are naturally pick lots of harmonics and its normal. I tried changing height of pickups but no luck, something wrong with my guitar, or my digital effect pedals distortion is very crappy(thats 50 dollar Vamp with amp simulation ) ?

I would just like to point out something that has not been mentioned.

Using a finger from your right hand (and no amplification on the guitar), hammer on to a note on the fretboard. Listen closely, and you will hear two distinct notes ringing out. One is the note you would expect to hear -- the fretted note. The other note is the portion of the string between your finger and the NUT. That is the natural consequence of striking a string: you essentially divide the string into two strings, both vibrating and emitting a sound.

What does this have to do with the issue at hand? When you touch the pick to the string, it is doing the same thing as your finger: dividing the string in two. Eventually the pick completes its stroke and you only hear the fretted note, but in the moment the pick strikes the string, that action causes two separate notes to be created. Most people pick between the bridge and neck pickup, so the portion of the string over the bridge pickup is short and therefore high-pitched. This is the sound you are hearing. Lowering volume, lowering gain, lowering treble, and switching to the neck pickup all serve to reduce the problem, but technically the sound produced by the string is still there. (The neck pickup also has its own note being produced, but it will almost always be lower in pitch, and the harmonics over that pickup aren't as high anyway.)

All that is to say, despite what others have said, this IS a normal phenomenon in the sense that it is a natural result of playing a stringed musical instrument. Reducing it to the point that it is not noticeable is a separate issue. Technique, pick material, pickup construction, etc. may have some role in how much you can hear it, but the sound will always be there on some level.

[Edit] As I've grown more experienced in my guitar usage, I've discovered that oftentimes this issue is related to the pickup height. That is, if your pickups are overly chirpy, lower them (down toward the body and away from the strings -- your pickups should have a couple of screws that allow you to do this), which will reduce the treble, and so the chirpiness should be reduced along with it. Of course, you probably still want some treble in your tone, so it may take some experimentation to find the correct balance.

The only thing I can think is that you may have the pickups wired out of phase - I have a guitar I use for experimenting with new electronics, and when I ran my bridge humbucker with the coils out of phase I reduced the overall gain a fair bit, but got some accentuated noises from finger slides, pick and knocks.

This should be very easy to check if you can get a look at the wires to the back of the pickup.

When the coils are in phase, the signal from the pickups is boosted, hum is removed (hence the term humbucker) and you tend to get a fat sound, but with some of the higher harmonics removed when compared to a single coil pickup.

When out of phase, the signals from the coils interfere, and the harmonics which are accentuated are those which have opposite nodes at the two coils, leading to a lot of treble and some high jangly tones.

This picture from Deaf-Eddie.net shows some of the ways the wiring can be connected. The Gibson combination shows coils in series and in-phase. To take them out of phase you would connect the black and white leads together, take the green to ground and the red to the output. 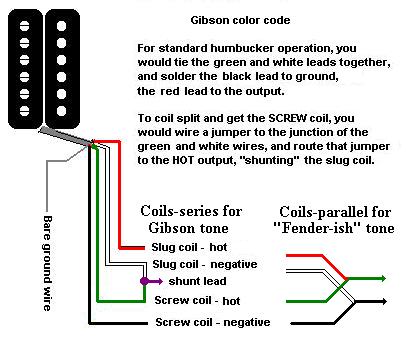 But in any case, check that all connections are secure, soldered well, and that no stray bits of wire are shorting any components.

Sounds like a grounding issue with the JB. Maybe check the wiring?

I've used a JB/59 set almost exclusively on my LP style guitars for over a decade and never had this issue.

Looks like its a combination of everything including; Pickup height, Pick material, Pick gauge, angel of the pick..But mostly its about pick.

Not the answer you're looking for? Browse other questions tagged guitar electric-guitar pick-ups or ask your own question.

4
Strange guitar warble sound
16
How can I avoid getting loud picking sounds on a distorted electric guitar?
6
Get series and parallel pickup wirings from a Strat?
4
Reducing Neck Pickup Dissonance
5
Neck pickup's sound is still a bit bridge-y. Trying to get jazz guitar sound
3
Guitar hums even when only pickup is wired
3
New pickups installed in guitar; mains hum in all positions?
2
Distortion kills some notes while playing