What methods are used by jazz musicians to fill in addition chords to a song?

What methods are used by jazz musicians to fill in addition chords to a song? For example: some songs can be played with just the I,IV, and V chords but then when played by the jazz musician, now has multiply chords that fit nearly every note of the melody, such that it sounds as though the melody is being played by chords.

tl;dr: If you have the right toolset, there will be several options to choose from even when it appears there are none. You just need the toolset to know the possibilities, and moreover the experience to know when to capitalize on them. Truly great Jazz musicians spend A LOT of time figuring out what works and what doesn't, so many of their choices will seem opaque and "just noise" to new listeners.

If you aren't a prodigy that can hear and play everything (I went to school with more than one), then what you will primarily rely on is a deeper understanding of harmony and harmonization of melodies, and harmonization of scales. Once you know how to harmonize scales, many options become available (i.e., figuring what notes are acceptable together). Take the following example (it's technical, but will demonstrate how simply or complexly one can harmonize a melody): So let's assume that I have a tune in C major, and the first 3 notes are C, D, and E. Knowing this, I actually have a wealth of options for what to play for these three notes if I know my harmony and am well-practiced. Consider the following options, from simple to complex (see below for more detailed explanations): 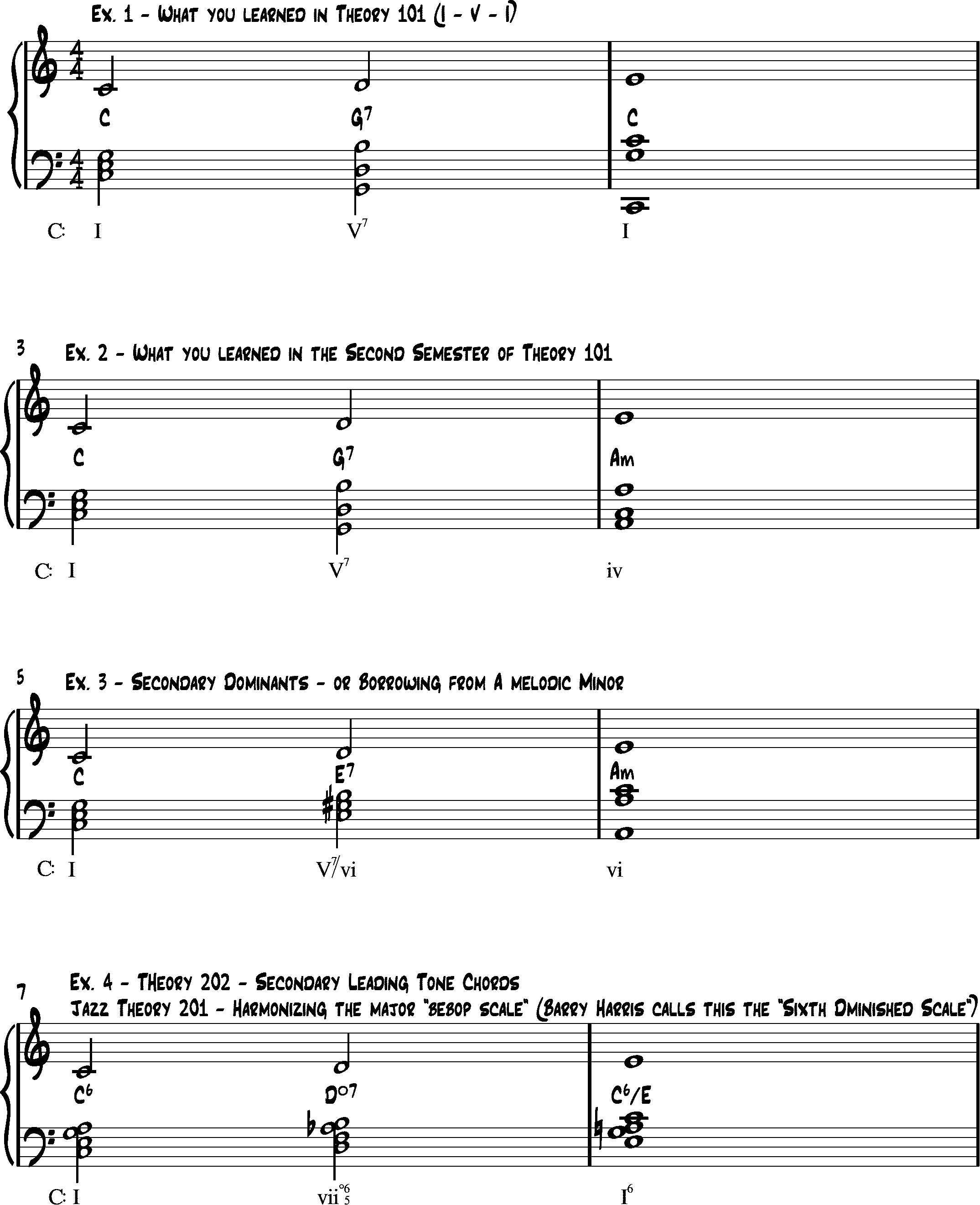 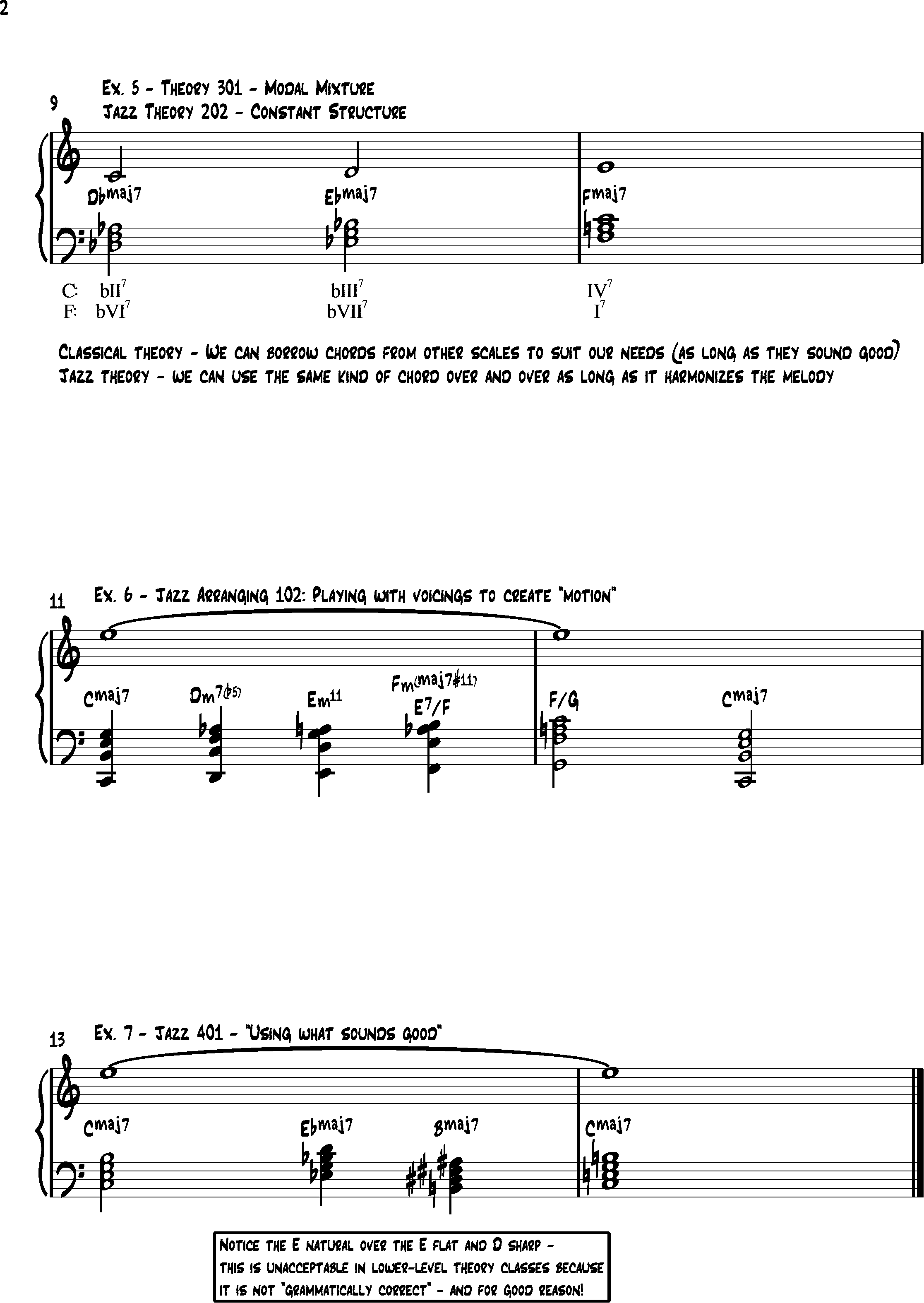 Note that Roman Numerals and chord symbols are just to facilitate understanding, and are not necessarily declarations of absolute certainty - context can change everything.

Ex 2: We can substitute some chords for others. Here, an A minor chord has been substituted for the final C major chord. Why? In short, because the note E is found in both C major and A minor. In fact, every note in A minor can be found in the C major scale. This means that A minor is a particularly good choice for a substitute chord for the C major chord, the I chord in C. If you know your theory, you will also know that the I chord of any scale (here, C major) will can be switched with the vi chord of the scale (here, A minor). This works in all keys.

Ex 3: We can borrow chords from other keys or alter them a bit to fit our needs. Here, the G7 chord is substituted with an E7 chord. Why? E7 happens to be the V chord of A minor; the V chord in any harmonized scale is important. Just as the G7 chord leads nicely to C, the E7 chord leads nicely to A minor. You might ask, well, why not A major instead of A minor? For the reason mentioned earlier: the notes in the A minor chord are all found in C major, so it is not so jarring to the ear; However, the A major chord has a C# in it, which is VERY dissonant in the key of C major; the ear really notices this. Yes, the E7 has a G# in it, but the ear hears it as "pointing" to the A, as it is the leading tone to A, and our ear hears it naturally leading up. For the C# in an A major chord, not so much. Try it out yourself - which sounds smoother, C to E7 to A minor, or C to E7 to A major?

Ex 4: With an solid understanding of harmonization, and once we know what a fully diminished seventh chord is, we can use them as "passing" chords to create a kind of motion - this is very common in jazz piano playing and jazz arranging. The reason for this is that more notes can be harmonized and a kind of "harmonic motion" can be kept going. We oscillate between "consonance" and "dissonance" here when using this kind of playing, called "block chords" and popularized by George Shearing (Although secondary leading-tone chords go back quite some distance, because they appear as a consequence of minor-scale harmony. Bach and Mozart, for example, are full of these kinds of chords). Now the reason for the mention of the "Major Bebop Scale" is that this particular harmonization comes directly from that scale - it is (here) the C major scale with an added note, Ab (G#), so that it is actually an 8-note scale. When harmonized in certain ways, we get this effect and gives us great freedom to harmonize notes.

Ex 5: Here's where things get looser. In classical harmony, we can "borrow" chords from other scales to suit our needs. Here, I have borrowed chords from other scales. This creates a bit more interest for the ear and, from a the standpoint of analysis, can leave us guessing which key we're in. I have chosen the chords Dbmaj7, Ebmaj7, and Fmaj7. Why specifically those chords? Well, they all happen to harmonize with their seventh as the melody note. That's the only reason I chose them. But they can be analyzed in different ways. You'll notice that in the key of C, the Roman Numerals will be bII7 (or, N7 for nitpickers), bIII7, and IV7 (that is, flat two major seventh (or Neapolitan major seventh), flat three major seventh, and four major seventh). This kind of notation is rare in classical theory - you do find major seventh chords in Bach and Mozart, but you will likely not find a Neapolitan chord not in inversion (i.e., N6) chord until much later in history. (Feel free to correct me if I'm wrong). We can also analyze these chords as if we're in the key of F major, borrowing chords from F minor (bVI7, etc). Which is right? Depends on the context - and what your ear tells you.

Ex 6: Let's look at a couple cases where the melody doesn't move, and we have space to play with some chords to create interest. Here I have expanded theory to include a type of arrangement, where I have actually taken the notes from Ex 4 and changed their actual voicing. All the notes here come from that C major bebop scale mentioned earlier. It's not so important as to how I arranged the notes (if you really want to know, they're drop-3 voicings with the root on the bottom). The point here is that by rearranging the notes from the scale according to some pattern, I can create some REALLY interesting chords while not having to borrow any new material. It also creates interest in the harmony when there is lack of interest in melody. (Notice that for the fourth chord here, there are two chord symbols - because, to the ear, they can be interpreted as either, and an argument can be made for both).

Ex 7: This is where the rubber meets the road in a very real sense. After we've done all our studying, after we've read the theory books, after we've transcribed and listened and played and all that, we have the power to choose what we know works, and beyond. This is part of the problem with the "incomprehensibility" of Jazz to outsiders, people who don't understand its underpinnings. These types of choices are made after we have a very developed inner ear and very keen melodic sense. I chose these chords not because they were dissonant to my ear, but because I found them compelling. This is really where things lift off. Now I could explain, clearly and theoretically, why this "works." But I found the sound before I found the explanation, and that comes from lots and lots of listening and playing.

I hope that this illustrates some of the choices the typical Jazz musician (or, a modern pop composer, or even a modern "new music" composer) has in their toolbox. This is by far not an exhaustive discussion of how one makes choices for harmonization. There are lots and lots of considerations in a discussion of this, but if you transcribe any modern Jazz pianist you will find several different techniques of harmonization used within a single recording. The point is we want options when playing, and preferably the options that are appropriate for the moment at hand - and that takes a lot of skill, practice, and experience to know what to use when.

Please feel free to add anything you feel I have missed or not explained well.

4
What are some commonly used chord progressions in contemporary Musical Theatre styled songs?
3
How to make your chord progression sound smoother?
4
How to make a melody line more full and interesting (piano)?
12
Recognizing modulation style / pattern in Steely Dan's "West of Hollywood"
3
Seventh chords and the key a song is written in
7
What is the most efficient way to memorize chord changes?
2
Use of chord progression while playing melody by ear
2
Analysis questions about "Jade's Desert" from Mortal Kombat Trilogy OST
1
Which chords should be avoided in a four-chord progression (mathematically)?