What's the name of the instrument that is blown into, that has a lid that lifts up?

In cartoons, especially in processions, there's an instrument that I think is reminiscent of a tuba. When blown into, the lid lifts off.

Difficult to answer without an image, and also difficult to assume that a cartoon image is necessarily a reflection of a real instrument. It could be conjured up from a cartoonist's imagination, or a caricature/artistic rendition of something similar in the real world.

What we do find is the sousaphone, an instrument similar to the tuba, but is constructed so that it can be worn comfortably in a marching band:

The sousaphone is a brass instrument in the same family as the more widely known tuba. Created around 1893 by J.W. Pepper at the direction of American bandleader John Philip Sousa (after whom the instrument was then named), it was designed to be easier to play than the concert tuba while standing or marching, as well as to carry the sound of the instrument above the heads of the band.

Like the tuba, sound is produced by moving air past the lips, causing them to vibrate or "buzz" into a large cupped mouthpiece. Unlike the tuba, the instrument is bent in a circle to fit around the body of the musician; it ends in a large, flaring bell that is pointed forward, projecting the sound ahead of the player. Because of the ease of carrying and the direction of sound, it is widely employed in marching bands, as well as various other musical genres. Sousaphones were originally made out of brass but in the mid-20th century started to be made from lighter materials like fiberglass; today both types are in wide use.

Here's an ordinary tuba - it doesn't wrap around the body. It's generally used in symphony orchestras and some types of jazz ensembles, and most of the time the player sits. 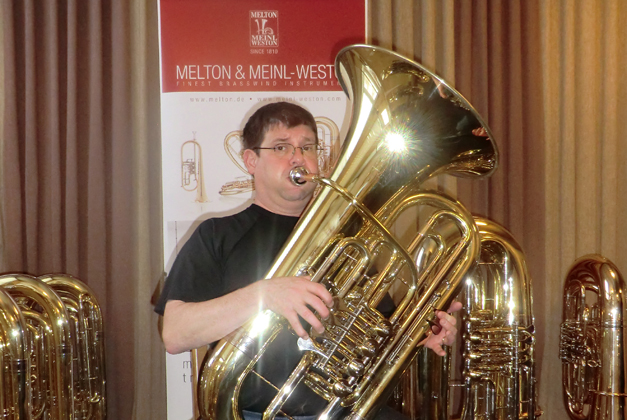 Here are two sousaphones, bringing up the rear in a parade. You essentially wear a sousaphone: 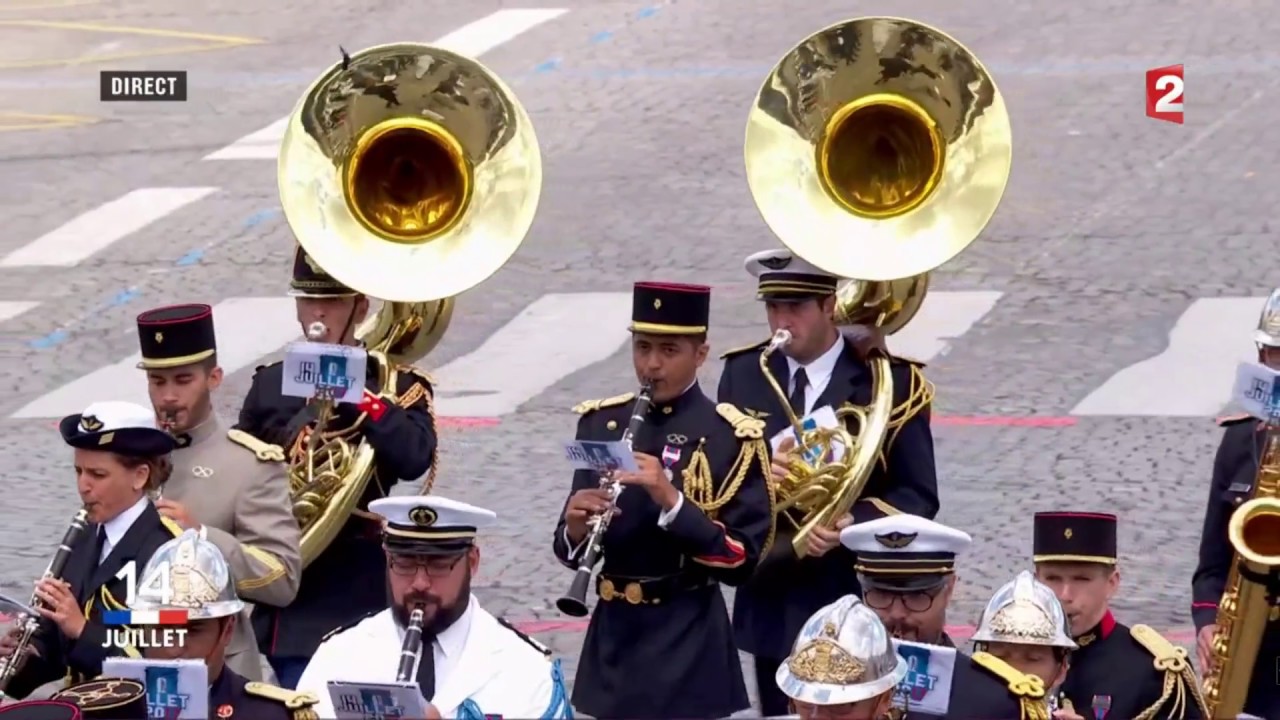 As for the cover, the tuba is frequently played with a mute: 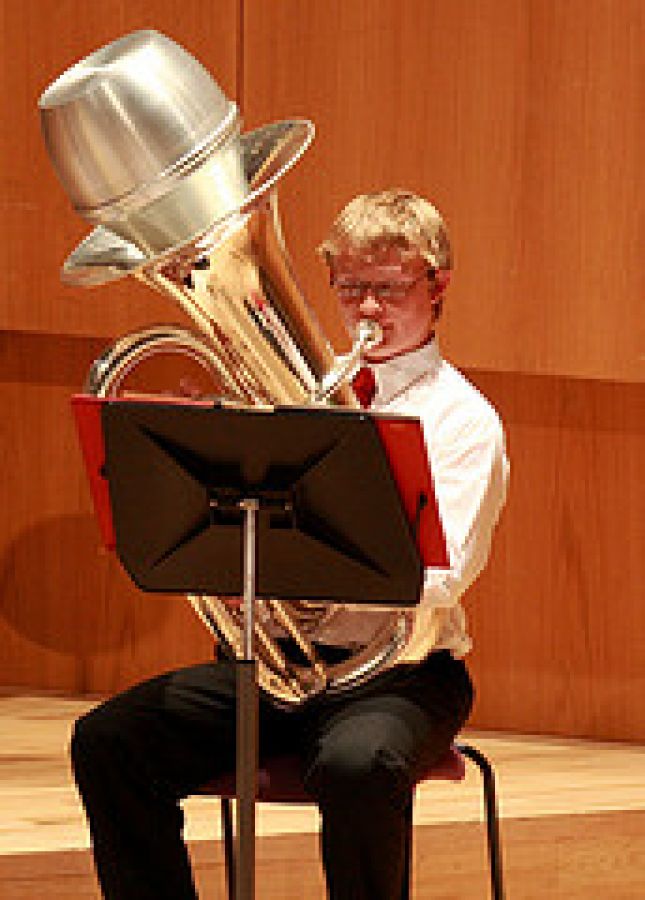 Problem is, the sousaphone would not usually be played with a mute - the music of marching bands is generally very bright, loud and bold sounding, and tuba is designed to project that sound, as explained above. A mute would just be detrimental to that. Judging from size and shape of the tuba's mute, it would also probably fall out, or make marching with it quite difficult, were a sousaphone muted that way for marching.

Perhaps this cartoon instrument is a sousaphone fitted with a special mute/cover of some sort, attached to the rim of the bell to prevent it from falling to the ground while marching, although I could not find any references to such a thing now.

What does seem to be rather common is something like this - a sousaphone with the bell covered with a thin sheet of paper or cloth, displaying some sort of advertisement or emblem: 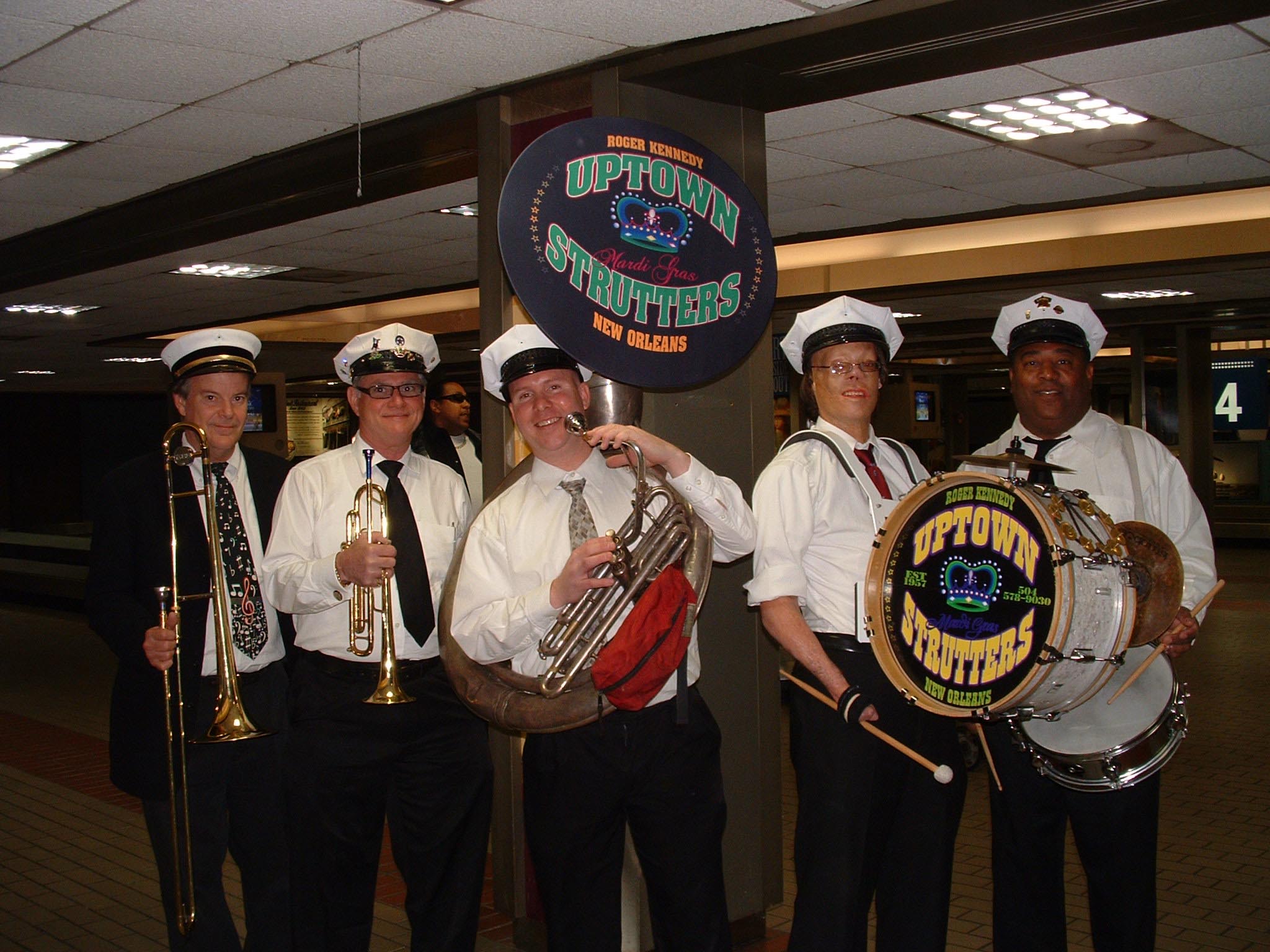 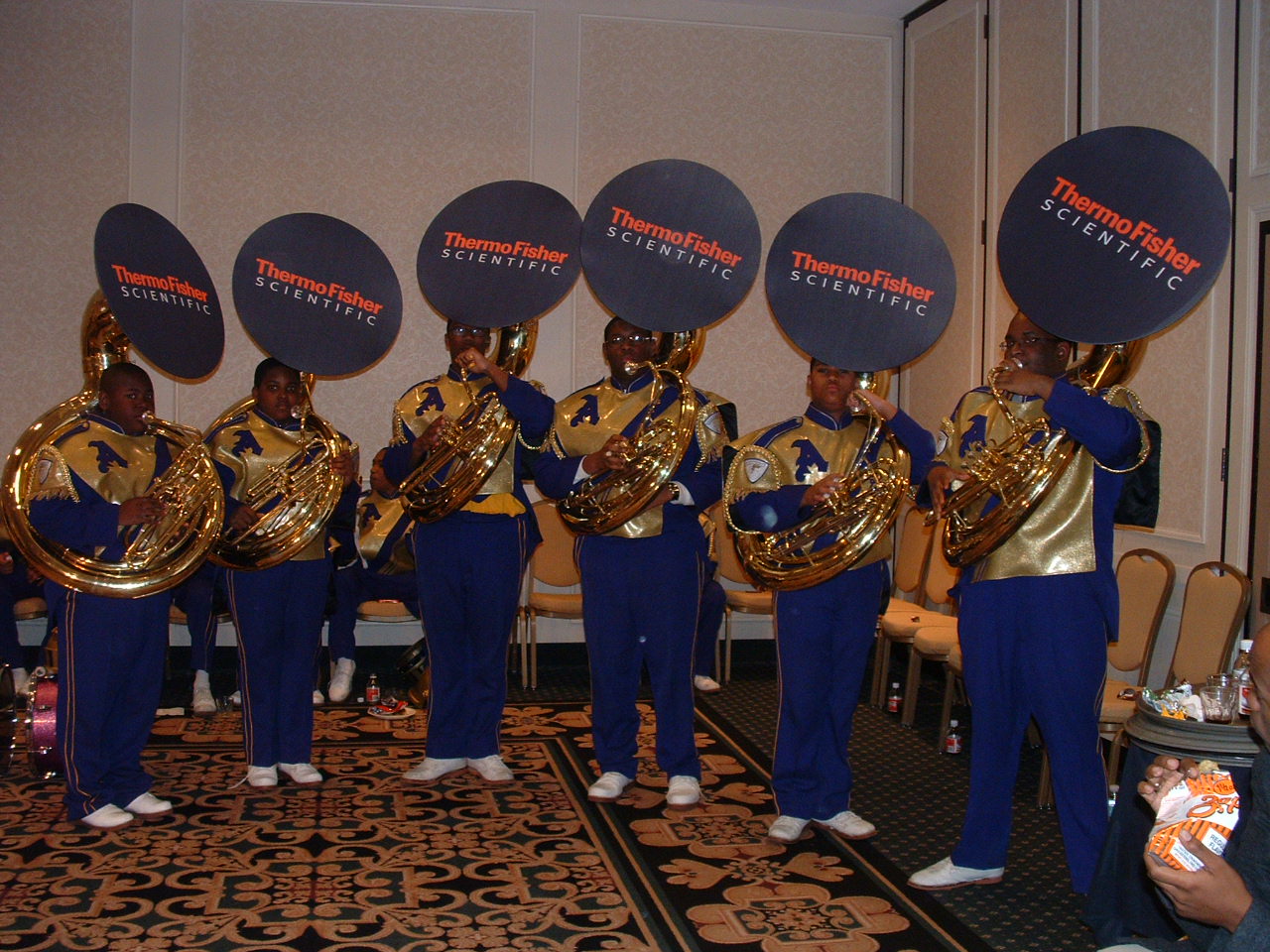 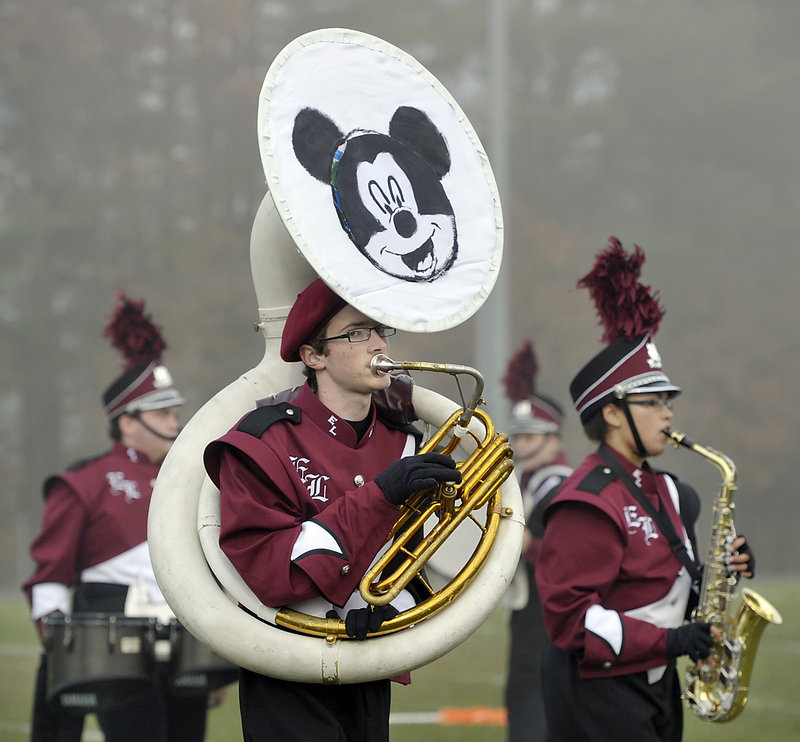 A cover like that is not a true mute and won't diminish the sound of the sousaphone very much, compared to effect of a real mute. Based on the information you've given us, it's reasonable to say that the cartoon image represents a sousaphone fitted out in this way, perhaps with a bit of cartoon fantasy added in about the cover popping up when it's played.

Regardless, it's hard to see how a mute of any sort would be popping up when playing a tuba or sousaphone. The mute is seated in the bell, and the energy from the player's blowing is converted into sound waves. As the tubes of the instrument widen, what's left in the form of air pressure from the player diminishes. By the time any remaining air reaches the bell of the instrument, it would be unlikely to have sufficient force to cause a mute or cover to pop up and down unless the player was really trying hard to make that happen. Normally the mute doesn't jump around. Perhaps the mute seals the tube in a way that maintains pressure inside that could blow it off if the player blew very hard while they were marching? That seems remote, because such a seal would probably make it difficult or impossible to play the instrument properly. (Admittedly, I have never tested this myself. I'm not very familiar with tubas from close up. Perhaps a tuba player will weigh in on this...)

Nonetheless, I suppose it could be that the lifting up of the lid (mute?) could come from vigorously marching while playing, thereby shaking the instrument as its played, etc.

More likely IMO, is that the lid popping up is just the cartoonist's way of emphasizing the loudness of the band - no real instrument like that ever existed: You're referring to a cartoonist's stylized, embellished rendition of a sousaphone blaring loudly in a marching band. Unless we have an image, it's difficult to say more.

5
Finger techniques when playing valve brass instrument
5
Are certain instruments "arpeggio friendly"?
2
How to reach the lower notes on a B-flat tuba?
4
Why are there no instruments made from rocks?
4
Is a wind-string instrument (such as the one I will explain) acoustically possible?
5
What do you call when somebody uses a paper between his lips and blows to improvise?
1
Tuba = valved bugle? I thought it was trumpet
0
Which brass wind instrument has the widest range?
5
Buzzing into the mouthpiece of a transposing instrument