How long does a sound take that corresponds to a note at a certain tempo? What notations / conventions do influence it in detail? [closed]

Ask Question
Asked 2 years, 3 months ago
Active 2 years, 2 months ago
Viewed 981 times
3
Closed. This question is off-topic. It is not currently accepting answers.

I am just starting to get familar with the meaning of notes and already read some related questions.

Lets assume I have a speed s of 60 "beats per minute" (bpm). Then one beat occurs during a time span of 1 s.

Lets further assume a piece that has a time signature of 2/4.

If I understand it correctly, by default the denominator is mapped to one interval (if not otherwise stated using an explicit tempo marker).

(Or is the default tempo mark not given by the denominator but another convention? For example a "dotted quarter" tempo mark for 6/8? If so, what tempo marks are mapped by default to what time signature? Is there some sort of lookup table?)

A) Does the sound that I can hear when a 1/4 note is played take the full 1 s? Or can the sound be shorter (or even longer than that)?

I. If the piece would consist only of 1/4 notes with the same pitch... would I hear only one continuous sound?

II. Or should I understand the time for a note value more like an interval where the sound is living in. The sound might start with an offset a from the beginning of that interval. Depending on the instrument or whatever (what exactly?), the length b of the sound can vary. There might be some time c of silence before the interval ends. The maximum duration of the sound is limited by the end of the interval (Is it or are sounds allowed to overlap?). 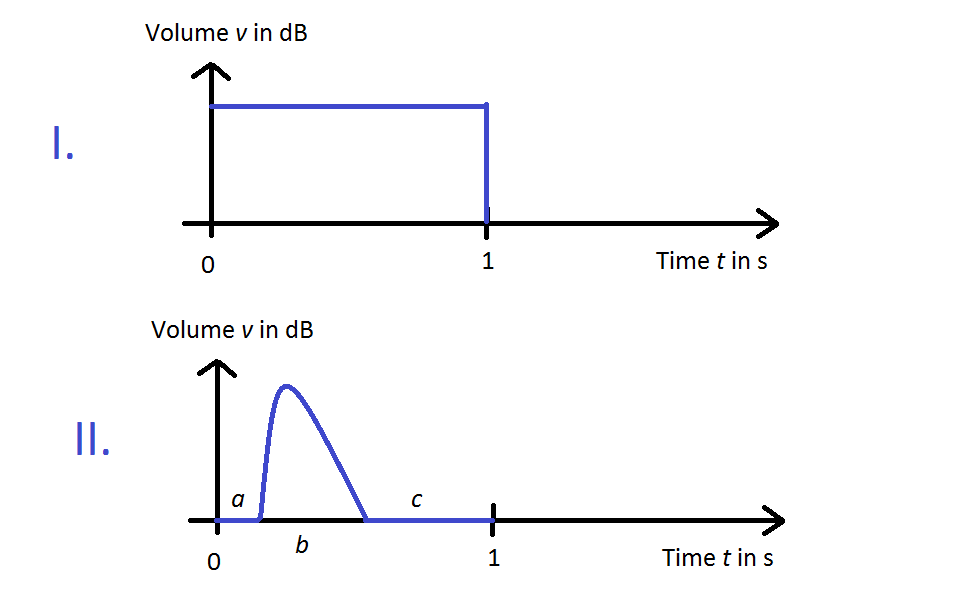 B.) If II. is true, what kind of notation and/or convention "has an influence" / is "used to specify"

C.) Is a always zero? Can a an c be negative? Do the notations only target a and b ... and c always automatically follows from a and b in combination with the interval length? Or do some notations target a and b and others c? Some kind of relation matrix of what notation/convention influences a,b,c would be great.

D.) Lets say we have two instruments with a fixed shape for the sound. The first shape is like a delta function, very sharp and short (e.g. 0.01 s). The second shape has long rising and falling parts, roughly like a triangle (0.4 s). If the two instruments would like to play together on the same notes, would I hear the maximum volume for the second instrument later than the first one, because both start with an offset of a = 0 at t=0? Or would the player of the second instrument start earlier, e.g. with an offset of a=-0.2 s, so that both reach the maximum at t = 0 (or better at t=0.5 at the middle of the note/interval?)?

I reckon this is a great question and I was looking forward to the answers myself - as no-one has answered yet, I'll add some thoughts, even though this might be more like a 'long comment' than an answer.

I think the main thrust of the question is asking how the volume envelope of the instrument being played actually ties up with the music notation.

Does the sound that I can hear when a 1/4 note is played take the full 1 s? Or can the sound be shorter (or even longer than that)?

It can be the same, shorter or longer. If you're playing an instrument whose decay is so fast that it can't actually resonate for a full second, the sound might be shorter. Likewise, if you're playing an instrument that is able to resonate much longer than one second but where the sound is nevertheless dying away, like a guitar or a piano, it might still be understood in some contexts that it's fine for the player to let the notes ring for longer.

I'm not totally sure of the conventions when it comes to different instruments as to how the envelope of the instrument affects notation choices such as when you'd bother putting rests between notes, or when you'd write a rest to make it clear that you're supposed to mute. Personally I've only ever played violin from notation - and that's more straightforward, as a violin note can be (within practical limits) as short or as long as you want, and there's usually the understanding that you don't let notes ring even in situations where it might be possible to do so. So a violin (and other instruments with controllable sustain, like brass and winds) can generally play durations that are closer to what the notation says 'literally'.

What it comes down to is that music notation isn't really a representation of what the music sounds like - it's a (rough) set of instructions to a performer. Sometimes the duration of a note on a score might not really be the length you hear, but just the period of time the performer should wait until playing the next note.

Stylistic interpretation comes into play too - a performer might play notes a bit shorter than notated if that suits the piece. There are also certain accent marks that can be used to signify alterations to e.g. the attack and duration - these are probably the closest things in standard musical notation to something that has the function of your b and c quantities.

If the piece would consist only of 1/4 notes with the same pitch... would I hear only one continuous sound?

Not with any 'real' instrument - a player playing a chain of notes would expect to play a 'new' note each time, restarting the attack portion of the sound - so you'd be able to distinguish the notes even if you were hearing a solid block of sound energy. You might hear (nearly) a continuous sound with a synthesizer set to zero attack and decay time and zero release time, but only if the player decided to play it like that.

Or should I understand the time for a note value more like an interval where the sound is living in....

I don't think it's that either. As I said before, I think the note value is simply what is helpful and easiest for the player to imagine they're playing, even if the volume characteristics of the instrument mean that something rather different is being produced.

Lets say we have two instruments with a fixed shape for the sound. The first shape is like a delta function, very sharp and short (e.g. 0.01 s). The second shape has long rising and falling parts, roughly like a triangle (0.4 s). If the two instruments would like to play together on the same notes, would I hear the maximum volume for the second instrument later than the first one, because both start with an offset of a = 0 at t=0? Or would the player of the second instrument start earlier, e.g. with an offset of a=-0.2 s, so that both reach the maximum at t = 0 (or better at t=0.5 at the middle of the note/interval?)?

I don't think there's a hard and fast rule there. in some situations, the player of the slow instrument will start a little earlier so that the perceptible start of the note coincides with that of the fast instrument. In other situations, they might start playing on time and let the sound fade in later.

Again, it comes back to the fact that a standard notation score is really just a very approximate set of instructions to the player - it's not a specification for sound.

I got some answers from a friend and try to sum them up in English:

O. If only a BPM number is given the time interval always correspond to 1/4 note, even if the denominator of the time signature is not 4. With other words, the quarter note always takes 1 s at 60 BPM, no matter if you have 4/4, 6/8 or whatever.

a) The offset usually is 0, but it does not have to be 0 in all cases.

The style of music, a wanted groove and the freedom of performance play important roles. In Jazz and Pop a singer might sing "laid back", which often means an offset > 0.

Furthermore, It is common practice in singing that the vowel of a syllable is matching the beat. Therefore, a possibly preceding consonant must have a negative offset. If you sing for example "kra", the "kr" needs to be before the beat, so that "a" is on the beat.

For instruments I can imagine something similar, e.g. well-timed pressure buildup for some wind instruments.

b) For the duration there are notations, from Staccato over Portato to Legato.

c) As far as I know, the suffix is never specified because it follows from the offset and the duration. In your theory it can be negative if the sound is dragged into the next beat. That often happens in singing for consonants at the end of words. If one sings the word "Tanz" on a quarter note, the "z" is usually pronounced on the next quarter note.

While I appreciate your efforts to understand musical timing, you can't really say that any note is always x number of seconds long. If you were to analyze the wave forms of two different soloists performing the same passage you'd find that there were differences in the attacks and lengths of their notes in the range of a few thousandths of a second. And each musician might produce similar differences in the way they play a similar note in different parts of a measure or phrase. It is these infinitesimal variations, in timing and other characteristics of the music, that give music it's expressive qualities and each individual musician their characteristic style. They are for the most part intuitive, rather than consciously measured.

Not the answer you're looking for? Browse other questions tagged notation time-signatures tempo or ask your own question.

19
What is the connection between time-signature, beat, and tempo?
13
How can I find the length in seconds of a quarter-note (crotchet) if I have a tempo marking?
6
Tempo, time signature and note lengths