I'm practicing some warm up exercises from the All in One Adult Piano Course. In the book these are left hand exercises. On the top staff the G7 says finger positioning should be 5, 2, 1. Is the finger placement relative to the root position (in this case G)?

Also, why does the G7 chord only have 3 notes? 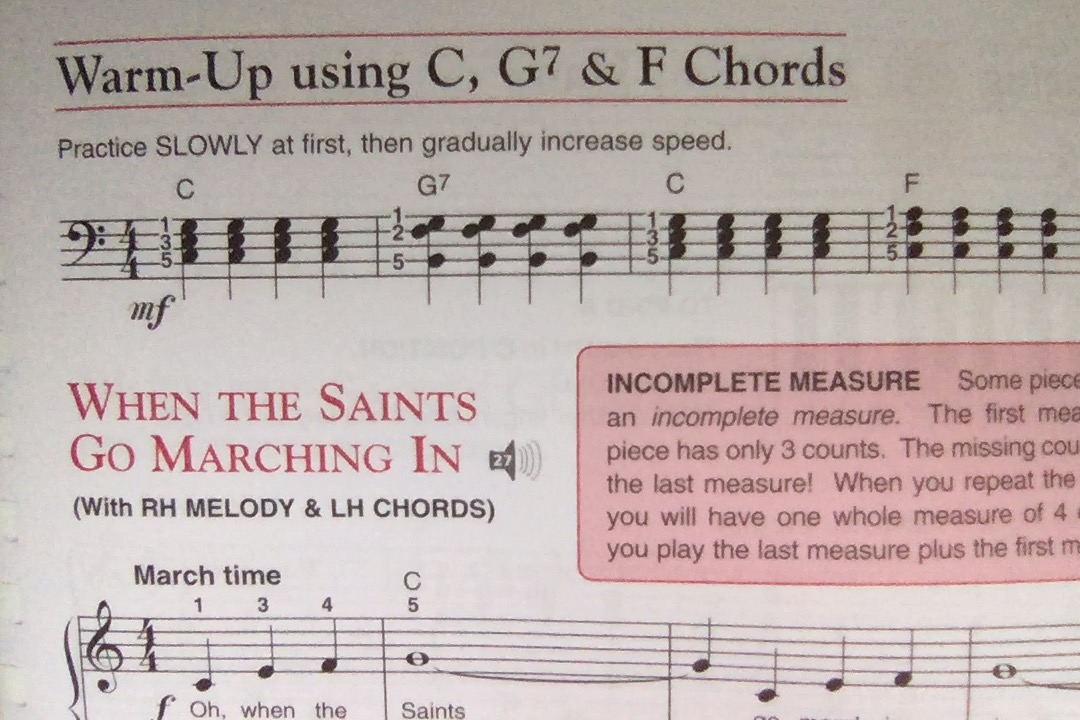 You play with your left hand pinky (5) the b, index (2) the f and thumb (1) the g - so the finger numbers are written next to the note they should play.

The d is skipped here for simplification. If you are advanced enough you could try adding it (I would suggest the middle finger).

As far as leaving notes out, often, less is more. Take the song, "The Rose." Its introduction on a C chord is only a C and G with the E missing. It creates a simple, open and more linear progression as the ensuing chords are just as sparse. That allows the pianist to explore the following:

Often a counter melody can be crafted out of the accompaniment for a pianist with fine tuned finger interdependence. Imagine that in your example a small instrumental combo was playing the arrangement and a clarinet was playing the E, F, E, F . . . If the clarinet were legato and the others were slightly detached, it would create an inner voice or counter melody. If you added the missing D it could hamper your execution, destroy the simplicity, muddy up the chord and, if the piece WERE being played by three instruments, who would play the fourth? I often look for invisible lines to explore in the accompanying notes, a line I can make legato or not in an effort to accompany the melody rather than just plunk static chords as an accompaniment.

The piano is its own instrument but often is called upon to imitate or play something imagined for orchestra. Chopin's music is great for exploring inner alternative melodic progressions that are not the melody.

Regarding the words "warm up," technique is in the brain and if your body and blood are warm, your hands are always at the ready especially if you've already been moving about. Like, walking. Do you do warm ups before you begin walking each day? Sure, when you get out of bed you may feel the need to break a few cobwebs but that is only because synovium fluid (body's lubricant) needs to do its job. Like starting your car, all the oil is in the pan and needs to be pumped back up to the engine but once it is done, in a split second, the engine is ready to go and at the beck and call of the car's brain - you.

Your hands are much the same. If the body is warm, and your brain knows how to play ergonomically, technique will always be there in an instant. However, if you have flaws in your technique, and you brow beat "strength and endurance" into the wrong muscles, you will always feel that you need to warm up until you beat the incorrect muscles into submission. If you feel you need to practice every day, you are probably doing something wrong. If you can go several days without practicing and you drop your hands and your technique is still there, you are doing something right.

Practice doesn't make perfect. Perfect practice makes perfect and perfection is in the brain, which controls our muscles and nerves, not the other way around.

Not the answer you're looking for? Browse other questions tagged piano chords practice or ask your own question.