What does two chords notated above one another mean?

I've been asked to accompany a local choir on my baseguitar and in the notes they sent me, I have found two chords notated above one another (see image below). This is not the first time I've seen this, but I was never sure what exactly to play in such a situation, so I decided to investigate. My search was largely unfruitful, and I have only found two different situations, where two chords would be notated at the same time:

The first one is the Slash-Chord, usually notated as e.g. Fmaj/E, the other the Polychord (as far as I've understood, this is a jazz chord where you essentially play two or more chords at the same time). Sadly, research of neither of these did mention anything of the type of notation I've found.

My Question now is: can anybody tell me what this/these chord(s) mean and what I should play.

PS: The piece of music is "in german" (we have some peculiarities in our notation, e.g. the "B" in the image actually being a Bbmaj -- a B would be written as "H". Maybe my problem is a similar german-only thing?) 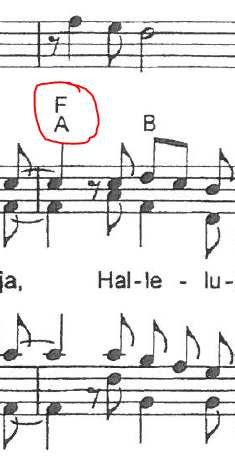 In this context it's a badly printed F/A, F major with A in the bass. (Or maybe this publisher leaves out the slash line?) Well done for showing the entire notation, so I could give a definite answer.

There IS a thing called a Polychord, two superimposed triads, which uses a similar notation (like a fraction, not with a slash). But this isn't that.

I would also mention that your job here probably isn't to 'play around the chords'. It's to read and play the bass line of the music.

It appears to me that each of the vocal parts are being written on the same stave, Bass, Tenor, Alto, and Soprano perhaps to conserve resources or to economize on printing expenses. If that's the case, it may provide room for improvisation on the bass guitar part. Ya think? I'm noticing the tones used to build an F Major chord with A as the lowest pitch,(first inversion) that might be a clue. At any rate, you might consider talking to the choir leader about this confusion. There is probably a simple explanation.

2
How are 13th chords with alterations "shorthand" written?
3
Piano - Hand position when playing "double octaves"
8
What does a pair of long horizontal lines between two whole notes mean?
2
How to notate fingerings on chords/double stops?
7
Does the existence of a chord tone (and its enharmonic spellings) imply the absence of another?
3
What does C.M. mean above a measure?
1
Writing down chord names and understanding their function in an example
1
Rewriting slash chords with chromatic descending bass
5
How should you apply the Nashville numbering system when a song is in a non-Ionian mode?