Is there a special way to notate a repeat for the right (treble) hand but not the left (bass) hand?

I'm working with a section of music where the right hand (treble clef) plays the same thing twice, but the left hand (bass clef) differs the second time round.

Usually I would just rewrite out the second treble part identically, but I was just wondering if there was a special, accepted way of representing this more compactly.

Even as I ask this question I realise there would be unnecessary difficulty in matching up the notes when sight reading, but still I'd like to hear any suggestions you have. 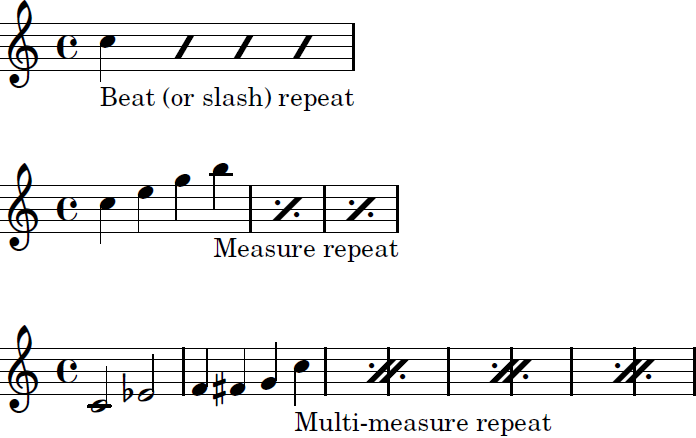 Also see this for more examples and details on repetition in music notation.

If it's more than a repeated one or two-bar riff (which Bar Repeats will take care of) write it out. You're giving the player problems just to save a little bit of space.

I can't vouch for how easy to read it might be in this particular case (your alignment idea sounds promising), but there is a 'normal' way to notate repeated sections like this. Dot Slash Slash Dot, centered in the measure. If more than one measure is being repeated, you indicate the extent of it with a thick line extending from the symbol to roughly the beginning and ending of the desired measures, with thick end-caps. If it continues for more than one stave, the absence of an end-cap will serve as a cue and you can repeat the symbol (in parens) hovering over the thick line on subsequent staves.

You should write the number of measures being repeated next to the symbol if it's more than one. And if it's very long, you can provide a countdown next to the reminder symbols. This is common in Band Music.

If it's a rhythmic figure, you can give it a name (fig.1, riff A, pattern alpha, etc.) either in-line when it first happens or in a side-bar and refer to it by name when needed. This is common in Guitar transcriptions.

14
Bass clef in piano scores, why?
0
Piano key sounded like a guitar string on top of regular piano timbre?
7
Why do our instruments go from bass on the left to treble on the right, and not the opposite?
10
What does a line through a tie indicate?
2
Workarounds for 10th intervals or larger when arranging for piano
5
Piano arpeggio symbol: split vs drawn through
10
On the grand staff, does the crescendo apply to the right hand or left hand?