Why does my G-string ring much longer than other strings?

I'm learning guitar and practicing some beginner chords. Specifically, C and G. I've noticed lately that the G string rings far longer than the other strings. It's the only open string in both chords, which I thought was the reason, but even just strumming all six open strings, the G seems to ring out longer and sounds "tinny" despite being tuned numerous times with a tuner.

If I just strum an Em chord, I'm not actually sure that the G string is ringing longer so much as just sounding louder than the others.

The guitar and strings are relatively new (less than a month). It is a PRS SE Custom 24 with factory strings. I believe the G string is 0.0160. I'm not sure what things to try to figure out if it's a string problem or just me. Any suggestions?

Finally had time to record a video showing this:

The audio output is from the output of a Boss Katana 100 amp direct into the camera. I just strummed an open C major chord twice.

As suggested by Scott, I compared the three G notes in an open G major chord. I recorded them with Audacity so I could more accurately time them. My picking of the three notes is certainly not identical, but I think this still demonstrates that there's nothing wrong with the duration. 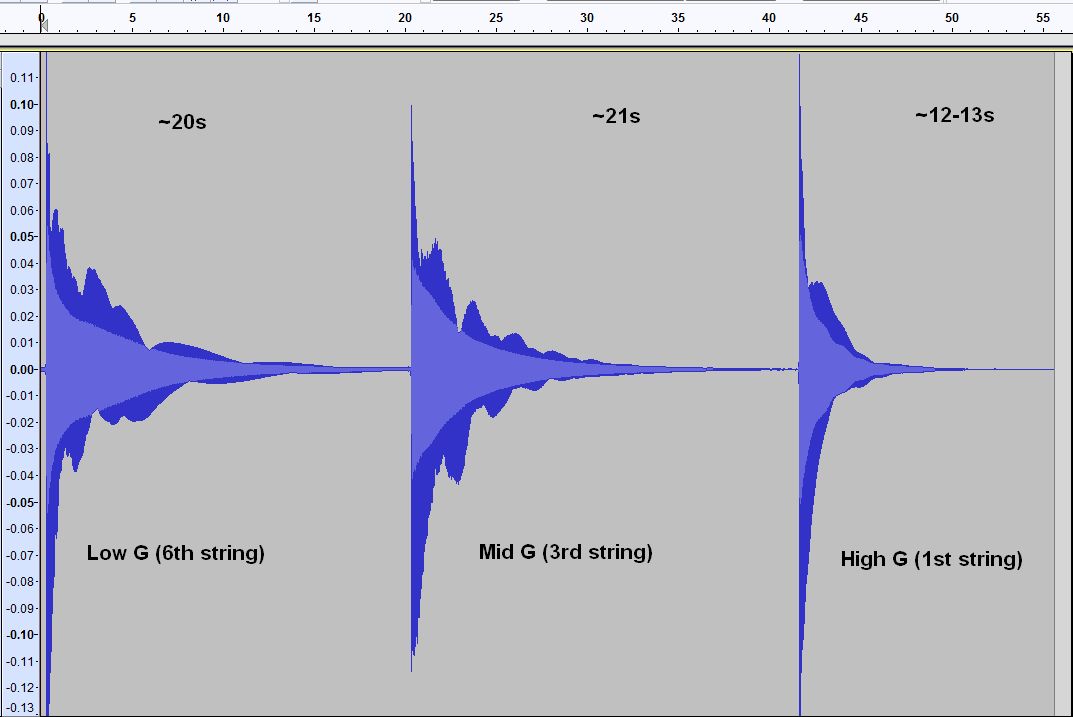 I think the low and mid G are very similar while the 1st string G is shorter. (Which could be my fretting of it, or, I speculate, thinner string or higher frequency, etc.)

In any case, the fretted 6th string and open G string being very similar in duration seems to show that there's nothing inherently wrong. I think I am just noticing the one string which isn't fretted between these two chords. Because I'm a beginner taking time to change chords, and not muting strings well, it has a tendency to ring more than the others.

As @CarlWitthoft says, it could be the way your pickups are configured or maybe your EQ (do you have the mids cranked with the treble and bass turned all the way down?). I know my Strat resonates best when I strike the A string (I feel the vibrations in my belly through the body of the guitar); maybe yours resonates in G. You could test this by playing the 3 G notes in a G chord and seeing if they all sound for about the same length of time.

But my first thought when reading your post was about the physics of vibration. A string that vibrates longest is shedding energy slower than the others. Given that the G string is the thickest (the wound strings have thinner cores), it would make sense to me that it would maintain its energy the longest.

Well, it's certainly cheap and easy to swap in a different G string to see what happens. Different axes can have different body resonances (tho' less so in solid-body). Another possibility is that the pickup under the G string is a bit higher than the others, making more sensitive. And don't rule out a nonlinearity in your amp & speaker combo.

Not the answer you're looking for? Browse other questions tagged electric-guitar strings or ask your own question.

8
My high E string broke one week after replacing my guitar strings. Could that be an installation issue?
3
How do you play guitar dead notes quickly switching?
10
Why does palm muting give a higher output than a normally played power chord?
14
Why are guitar strings numbered this way and not the other way around?
10
Should you change the strings on a brand new guitar?
1
Electric guitar out of tune on 12th fret(intonation)
4
Is it normal for oud strings to touch other pegs on the head?
3
Muting string technique with right hand only
5
How can I improve the tone of my Fender Strat on high frets?
1
Practicing electric guitar using a Boss Katana, what can I use for playing backing tracks?