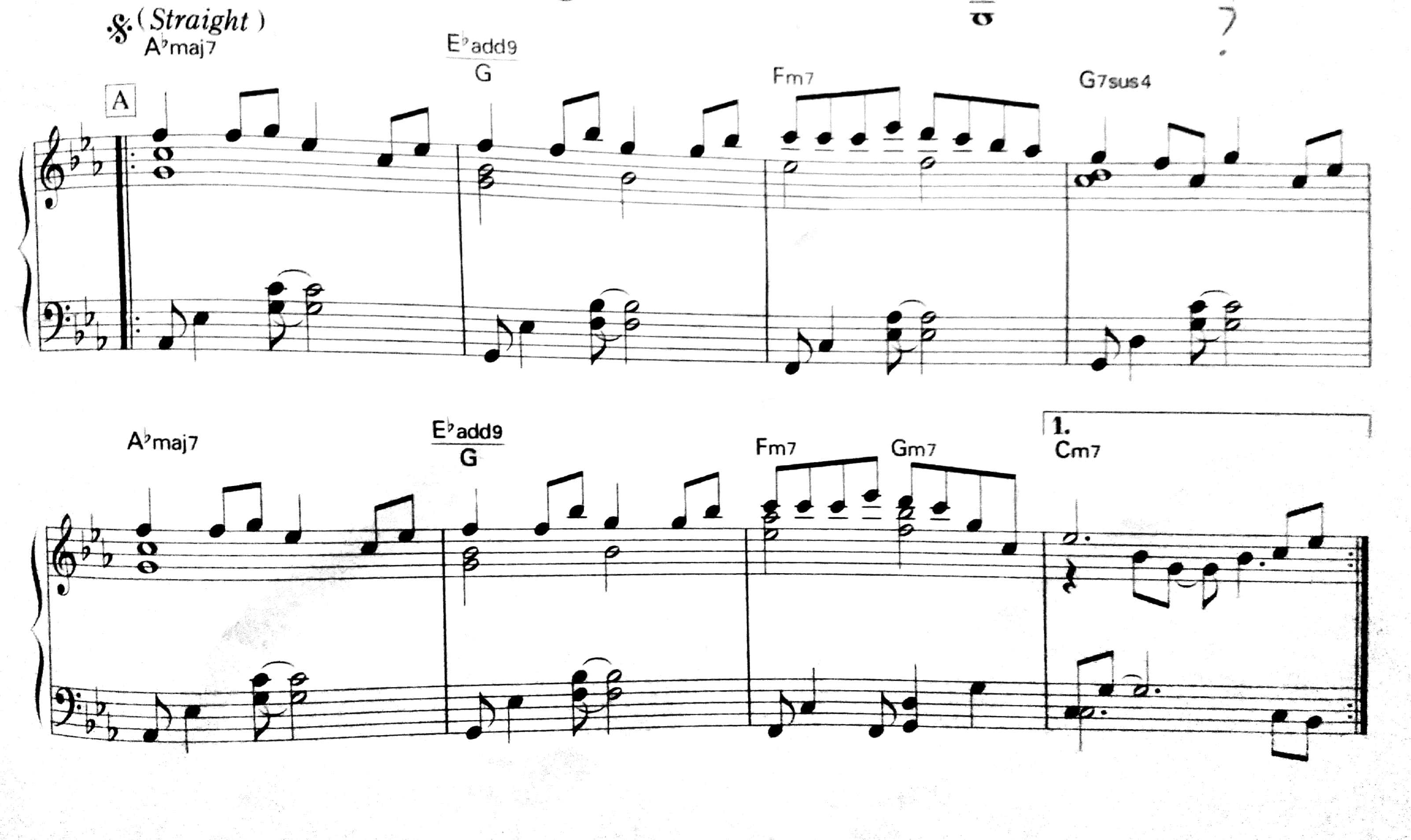 The Song is Eb Major key. But it starts the part with the Ab Major. What I can't understand is at the bar 4 it ends with the G7sus4 then goes back to Ab.

how does this work ?

I agree with Dom's answer and would add that the A section is best thought of as being in Cmin rather than EbMaj (just as Dom suggests). Before making a case that the A section is in Cmin, I want to say that the introduction definitely makes the song sound like it's in EbMaj. The melodic pattern very clearly resolves to an Eb tonal center.

But once the A section starts, everything else that happens suggests Cmin as the tonal center. For starters, the A section never resolves to EbMaj, and the EbMaj/G chord sounds more like a passing chord to me because of how the melody builds tension during measures 2 and 6. The ultimate resolution in the last measure of the A section is to Cmin, not to EbMaj. Moreover, the progression features a G7 chord (albeit in suspended form), which is the V to Cmin. By contrast, the song doesn't contain a Bb7 chord, which is the V to EbMaj.

In fact, in measure 2, the only instrument that I hear playing an Eb is the mid-range synth guitar voice. The bass is playing a G and the melody is outlining a Gmin7 chord. Hence, if we ignore the mid-range synth guitar sound (the one featured in the intro), then the progression looks and sounds like AbMaj-Gmin-Fmin-G7sus or bVI-v-iv-V7sus. The V7sus chord leads back to a bVI, which is an extremely common deceptive cadence:

deceptive cadence: a chord progression where the dominant chord is followed by a chord other than the tonic chord, usually the sixth chord

The fact that the V7 chord is suspended adds to the tension, to the unresolved feeling, and to the amorphousness of the key signature created by the mid-range snyth line. If the song had used a G7alt chord, it would be much easier to identify Cmin is the tonal center, but the G7sus keeps us waiting for confirmation of the true tonal center.

So I would suggest thinking about this G7sus chord as part of a deceptive cadence.

There's nothing really to explain beyond the basics keeping notes common.

Before we get to the analysis, just so we're clear a G7sus4 has the notes G, C, D, and F and due to the sus is neither major nor minor. It is not a functioning dominant 7th because it.

Between the 3 chords Fm7, G7sus4, and A♭Maj7, They all have the C note in common which is introduced by suspending the 3rd in the G7. You can even see the bass clef has the same part in measure 4 and 5 further showing that the progression takes advantage of common tones.

Not the answer you're looking for? Browse other questions tagged theory chord-theory chord-progressions or ask your own question.