What's the difference between dissonance and beats?

Are dissonance and beats (at a difference frequency) in music pretty much the same thing?

They're somewhat related, but not exactly the same thing - from https://en.wikipedia.org/wiki/Beat_(acoustics):

In acoustics, a beat is an interference pattern between two sounds of slightly different frequencies, perceived as a periodic variation in volume whose rate is the difference of the two frequencies.

If the difference in frequency between two notes is very slight (such that the two sounds would be perceived as the same note), you might get an audible beat frequency without there being a dissonance - it might just sound like a variation in volume, or a chorusing effect.

Once the difference becomes a little greater, you will get an audible beat frequency along with a sensation of roughness or dissonance.

(This answer is based on a previous version of the question. One of our well informed users has edited the question, making this answer somewhat irrelevant)

Are dissonance and beats (frequency) in music pretty much the same thing?

No, they are not the same at all, although the concept of dissonance is connected to frequencies in the mathematic sense. ( Musical terminology discusses dissonance in terms of intervals and harmonies, not frequencies.)

A frequency is a single value: For example 440hz.

Dissonance is something else entirely: It means how two piches at different frequencies sound and interact when heard together, either simultaneously or one quickly following the other, for example pitches of 440hz and 570hz played together. We call such relationships between pitches dissonant when their sound is "tense" or disharmonious - perhaps "unpleasant" to most ears.

The opposite of Dissonance is Consonance - more Dissonance = less Consonance. We call relationships between pitches consonant when their sound is "relaxing" or "harmonious" - perhaps "pleasant" to most ears.

Dissonance/Consonance can ostensibly be measured empirically, by examining different intervals on an oscilloscope, but like everything musical, the essence of dissonance and consonance remains subjective, dependent on listeners' taste, and musical context as explained here: Quite a good discussion about consonance vs dissonance, that explains better than I could - Consonance and Dissonance

In music theory, consonances are traditionally divided into two groups: perfect and imperfect. Perfect intervals (1, 4, 5, 8) are perfect consonances, as seen in the polyphonic music of the Middle Ages. Imperfect consonances (3 and 6) are either major or minor.

Dissonances can be divided into sharp and soft dissonances. This division relates mainly to atonal music. Minor second and major seventh are sharp dissonances. In tonal music, non-diatonic intervals (diminished and augmented) are usually dissonances, but in jazz and other African-American music, the tritone is "neutral", in other words it does not require resolution to a consonance.

All the divisions mentioned above are based on a shared understanding of their meaning; in the course of history, there have been different views about the concord of simultaneous tones. These definitions mainly relate to individual intervals in notation. For example, an augmented second and a minor third are identical as sounds in equal temperament, but in the Western notation tradition, the former is considered a dissonance, the latter a consonance.

It should also be noted that the concepts "consonance" and "dissonance" are highly context-related. How sonance (consonance or dissonance) is perceived depends on several music-psychological factors: temperament (other than equal temperament is perceived as dissonance); genre (in atonal music, consonances are scarce); timbre; the extent of the interval (can be several octaves); harmonic environments before and after the interval; and so on.*

It is clear is that dissonance is only possible with two contrasting frequencies or pitches.

Here are two interesting graphic representations of perceived dissonance, moving through the entire chromatic octave, in order of intervals. I'd call these representations "quasi-empirical". 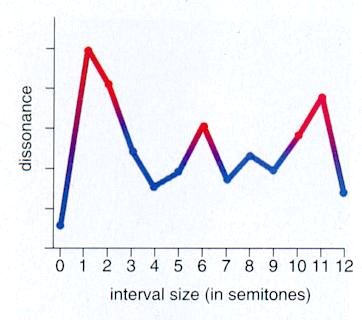 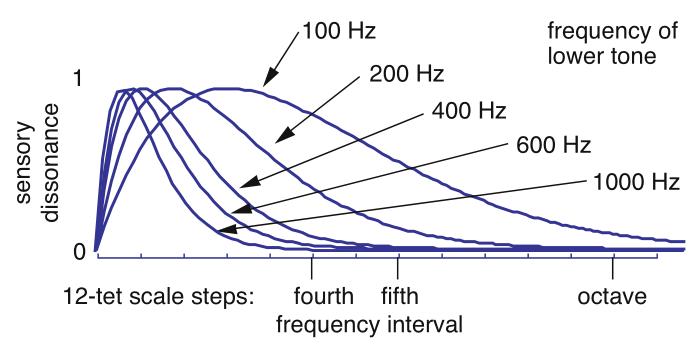 Dissonance is perceived as two notes (pitches) that do not sit well in each other's company, while consonance is generally two notes which 'sound well' together.

Beats are the phenomenon of two notes sounding together, and being very close in pitch. The closer they are, the slower the beats heard. When they are identical, the beats disappear. It's a recognised way to check tuning on some instruments. And, it's not necessarily dissonant - otherwise the chorus and flange effects wouldn't be so widely accepted! By the time they are less than a semitone apart, beats generally disappear to the naked ear. So, dissonance and beats are separate things, with no real relationship, as both dissonance and consonance require the two notes to be at least a semitone apart.

The other answers already go into more technical detail, so this is a simplified answer.

Not the answer you're looking for? Browse other questions tagged terminology frequency consonance-and-dissonance or ask your own question.