Piano music - should I truly not use the sustain pedal in places not marked so?

This is especially rampant in romantic piano music and later. There are places that pedals are marked, and places where they are not marked. I understand if it's a predominantly staccato passage when the detachment must be heard. It's also fine if it's a very slow and sparse legato passage.

But there are lots of places where they don't mark it, like when the bass notes sound like they should last the entire chord, when it's difficult to maintain legato because of far jumps or large-stretch chords, and a wide range of "arpeggio" notes. It sounds HORRIBLE and/or WRONG without the sustain pedal in a lot of these unmarked places. Besides, artists DO use the sustain pedal in these unmarked places (recordings), as I've also seen live performers do the same.

I've seen in similar questions that it's really the pianist's call when [not] to use the sustain pedal. I understand this if there are absolutely no pedal markings in the score (like Rachmaninoff's Prelude in G minor - all editions I've seen so far), but when they specifically mark pedals, it seems adamant that I shouldn't when they don't mark it. So, with such pieces with specific pedal markings (especially the absence of them), can I still use the sustain pedal as I deem appropriate?

Liszt once simply wrote (tr.) "It is assumed that the pedal will be used with understanding."

The use of the pedal depends greatly on the sustaining power of the instrument at hand, its tonal character, and the acoustic of the hall. A fine pedaling in one venue may be impossible in another. For this reason alone, it makes little sense for composers to try to notate every last detail.

The presence of a pedal indication does not mean that the pedal should not be used when not indicated. The composer is writing the score to communicate intent to the performer. Things considered obvious will typically be omitted.

You may compare the practice of the pianist-composers in marking or omitting to mark the pedal with J. S. Bach's practice in omitting phrasing. In both cases, the assumption could be that anyone in a position to perform the music would understand what was required.

Often, a specific pedaling is only indicated by the composer when it is not obvious. One famous example is in the first movement of Beethoven Op 31 No 2. Examples of such long pedals abound in Liszt too. In considering whether to follow such indications to the letter, you need to remember that the instruments of the time behaved differently. Most significantly, they had generally inferior sustaining power.

Another consideration is the source of the pedal indications. Are they direct from the composer, or editorial additions? The latter is especially likely when handling horrible old Schirmer editions, for example. Even when the indications are from the composer, were they meant for general use, or written in for a pupil? For example, the textual situation in Chopin is complicated not only by selling to multiple publishers, but by his writing of variants and other indications while teaching.

Unlike in Bach, Mozart, or even Beethoven's piano works, those written by Chopin, Liszt, and later composers often require the pedal, even when it isn't marked, for reasons like expression from the sustain or large leaps. Same with Liszt's transcriptions of Beethoven's symphonies for solo piano. Take this bit from the Liszt transcription of Beethoven's Fifth as an example: 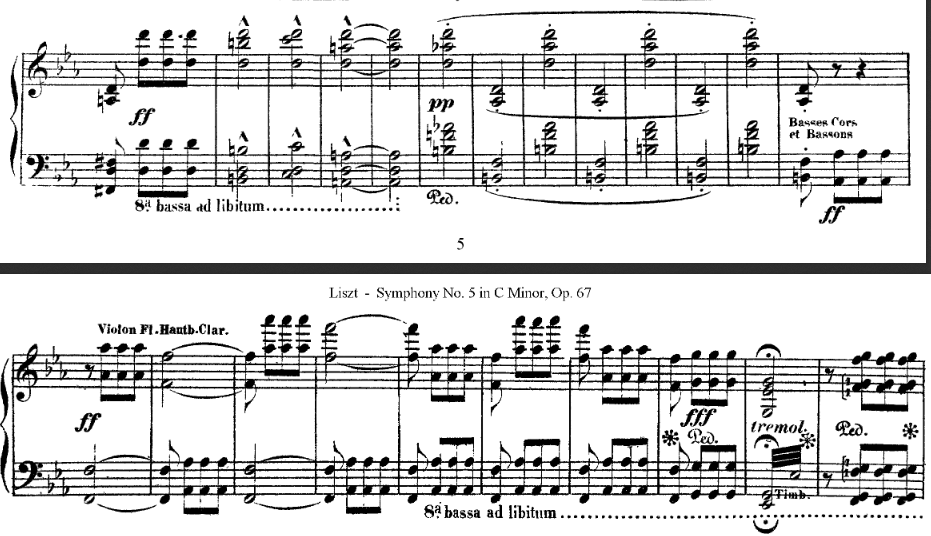 At the second fortissimo in the image here, the pedal isn't marked. But, whenever I play this piece, I sustain the pedal through the fortissimo until the G is reached and tremolos are used and once the G is reached I quickly release the pedal and press it down to get that G, G, G, Eb octave tremolo without it getting too muddy from all the previous entries of Ab, Ab, Ab, F. I also take his 8va bassa ad libitum not to mean:

which would be the literal translation, but rather to mean:

as though Liszt just wrote 8va bassa. And to make it even clearer that I have reached the recapitulation, I slow down for the opening motive of:

stated of course in 4 octaves simultaneously, even though, in the original symphony, it is more like a C minor chord in 5 octaves at the Eb at the start of the recapitulation.

Not the answer you're looking for? Browse other questions tagged piano keyboard-pedals romantic-period or ask your own question.

1
How do I play the last two bars?

25
With regards to piano sheet music, when are you supposed to press the pedal(s)?
7
Where do I release the soft pedal in Ravel's Jeux d'Eau?
17
How to play same note legato?
4
Should I connect the top melody of the "Moonlight" Sonata 1st mvmt using my fingers?
2
Can I use the middle piano pedal to sustain a repetitive melody line?
18
How often is the Sostenuto pedal used in classical and modern Piano Music?
5
Notes preceding slurs: legato or not?
4
Should I use the sustain pedal when playing Bach fugues?
0
Yamaha digital piano pedal connector
1
Bought a sustain pedal for my keyboard, notes don't fade out as fast as I expect when I raise the pedal. Deficiency of the pedal or of my playing?