How do I interpret this chord progression chart? 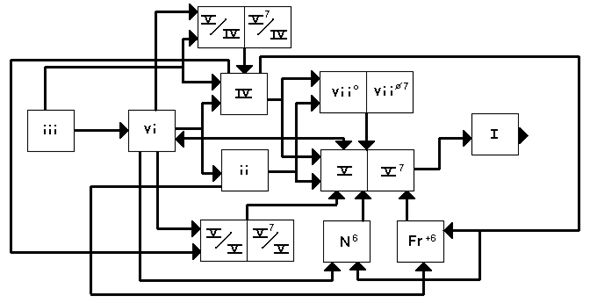 I stumbled across this and I'm pretty sure it came from some harmony book or textbook as they usually do (and if anyone knows which one, please tell). Could anyone give me any insights on how to interpret this chart? Can the I-chord be followed by anything? Also, are those polychords? In that case, this is the first time I've seen a functional 'formula' involving polychords, though my knowledge is quite rudimentary

These types of charts are really common in harmony textbooks, though I don't know exactly which book this one came from.

Yes, from I you can move anywhere, and I is always the ultimate goal (at least according to this chart).

With that said, there are a few problems with this chart. I'll list just a few:

You may also be interested in Old Books with chord progression charts or matrices?, but the two questions are quite different.

This is a very advanced version of this chart. I've seen many similar chats that are simpler and will link one after answering your questions.

Could anyone give me any insights on how to interpret this chart?

Can the I-chord be followed by anything?

Simply put, yes. That's what the arrow is telling you. The reason why it's not point anywhere else is because on I is where tonal progressions feel at rest.

Also, are those polychords?

No. The slashes represent secondary dominants in Roman Numeral analysis.

There are some advanced concepts on this chart like secondary dominant and augmented 6th chords which if you are new to theory might confuse you more than help you. musictheory.net has a very similar chart shown below:

23
What is a secondary dominant chord?
5
Old Books with chord progression charts or matrices?