What is an octave?

It may be simple but I am not able to wrap my head around it. I am new to musical tongue. What exactly is an octave? Is it a range of frequencies? And is it specific to an instrument?

There are two words that we use to describe how 'high' (or 'low') a musical note is in absolute terms - frequency and pitch. Frequency refers to the measurable number of cycles per second (Hz) in the sound wave, while 'pitch' refers to (subjectively) how low or high the note sounds to us.

You would think that the two would be very closely-related. For example, perhaps going up each semitone on the piano might mean an increase of a certain number of Hz each time?

Actually, the relationship between pitch and frequency is that each time we multiply the frequency by a certain factor, we end up subjectively increasing the pitch by the same amount. So if we take a note at 100 Hz, and multiply that frequency by 1.5 to give us another note at 150 Hz, the perceived interval (difference in pitch) would be the same as the interval between 500Hz and 750Hz (750 being 500 x 1.5).

In general, we can say most people have a strong sense of relative pitch, based on the log of the frequency scale.

This is why, in our system for naming notes, notes an octave apart are given the same letter name - because they have this sense of similarity to them.

If we take a look at this table of musical notes, and look at any two adjacent C notes, we can see that they do have this 'doubling in frequency' relationship: 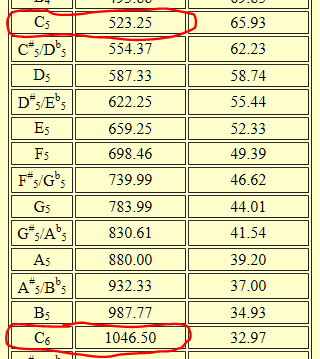 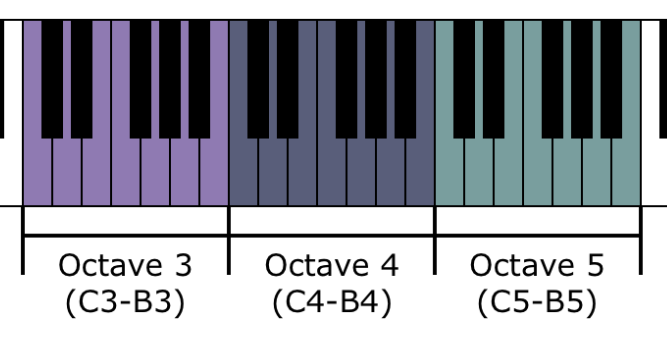 What exactly is an octave? Is it a range of frequencies?

An octave is not a range of frequencies. The musical lexicon does not deal with frequencies. It deals with notes, intervals, scales, keys, chords and other distinctly musical terms.

First: Octave literally means a series of Eight, from the Latin octo - eight. The term's musical use reflects that.

You may be confused because in our music, we use the term Octave in two different ways. As a scale, and as an interval:

One definition of Octave is a scale. This scale is an ordered collection of notes, iterating through the 8 notes of the musical alphabet of 7 notes and ending with same note we started on:

The term Octave is also used to describe an interval - the musical distance between 2 notes. If we build the scale A->B->C->D->E->F->G->A, the interval between A-1 and A-2 is called an Octave, because it spans 8 notes (including the two A's themselves.)

Failure to understand this distinction is the source of endless confusion for those seeking to understand music 'scientifically' or mathematically. (IMO, a very flawed approach.)

Sometimes, an octave is defined as the interval between one musical pitch and another with half or double its frequency.

Although this sounds nicely mathematical and scientific, it is not very correct:

And is it specific to an instrument?

No. It is a general musical concept not tied to any specific instrument, although it is particularly well represented on our modern piano:

Further: Dividing the points of octave equivalence across the frequency spectrum into 8 notes is particular to our western musical system. But the concept of our octave as represented by octave equivalence is virtually ubiquitous in all musical systems, because it is dictated by the laws of physics: When we double a frequency, the resulting note is the virtual twin of the original one. Although not all musical systems divide the "octave" - the range of a note to its double - into eight parts - virtually all of them build their music using that mathematical framework: Their musical units are divided into "octaves", although it may be divided into 12,16,20,32 or really any number of notes to form a recurring cycle representing musical divisions, akin to our octave. The concept of the octave - the recurring cycle of notes as we iterate through the sonic spectrum perceived as octave equivalence - need not be described using only our 8 note division.

Such differences in how the physical "octave" is delimited highlights what we explained previously: The language of music is not the language of mathematics.

For example, the pure chromatic system divides the "octave" into 12 equidistant notes to build a full cycle (an "octave"), usually referred to by their numbers alone. Indian classical music divides the "octave" into 22 notes. Nevertheless, they are dealing with the unit we call the Octave in our diatonic system, as it is manifest through octave equivalence: A psychological/physiological/physical phenomenon that is universal in humans, and probably in many other creatures as well. (@topomorto's answer makes this abundantly clear.)

In music, an octave is the interval between one musical pitch and another with half or double its frequency.

Before we go further, are you pondering this from the perspective of a singer, a guitar player, a piano player, or a horn/woodwind player?

(The reason I ask is this: Practical responses require perspective.)

The octave is an interval

It is the note eight scale degrees up or down. It has the same letter name but not necessarily the same pitch. The perfect octave is the same note in a higher (or lower) register but the diminished and augmented octave are both intervals with different letter names.

Why the unison and the octave are not called the first or the eight is an interesting, potential follow-up question that I do not have the answer for.

Musically an octave is an interval that is 12 half steps above or below a given note. It is the same note with a higher or lower pitch. If you look at a keyboard you will note that there are exactly 12 keys from low C to the next highest C on the keyboard. On a guitar there are exactly twelve frets between each the same notes.

An octave in simplistic terms is basically a series of eight. This particular series is dealing with the eight different notes that make up a scale. I’m going to use C major as the example in this situation. So if you were to play the C major scale starting at middle C, you would walk up C-D-E-F-G-A-B-C. That series of eight notes is a singular octave. Now let’s say that you start at the next highest C on a piano and played a scale. That is a separate octave, this can be said for any note that is played on any instrument.

There is also another way that an octave is described, and that is mainly to of the same note that are either higher or lower than each other. Using the C once again, your middle C in musical terms is considered C4. When you go up to the next C, it is C5, and that goes on the same for C you go up to. As an added explanation, any note lower that middle C cannot be in the fourth octave or higher. An example of this would be the B directly below middle C, that note is known as a B4.

I hope this was a helpful explanation!

Not the answer you're looking for? Browse other questions tagged piano octave or ask your own question.

5
Standard notation for an octave
57
A (440 Hz) and A (880 Hz) are completely different sounds to me. Does this mean I'm tone deaf?
4
Name for instruments that can only play one octave, vs one that can play many octaves?
2
How octave is effective in vocal range?
2
Should I raise this chord up an octave?
2
Can people can tell exactly in which octave a note is played?
0
Why were the frequencies for notes chosen?
3
What are these octave like shapes used in popular indie rock?
10
Was the term “octave” coined after the development of early music theory?
2
The theory of song by deadmau5 ft. Rob Swire - Ghosts 'n' Stuff