Music Theory: Frequencies related to playing a note on guitar

I am studying the physics related to playing guitar. I need to understand the relationship between the fundamental frequency of a guitar string and its harmonics.

I have been reading a lot on the internet (including this forum) and most people suggest that fundamental frequency should have the highest amplitude and the amplitude should keep decreasing with increasing harmonics.

However, my experiments suggest that this might not be true. For e.g., when I play the bottom string (E2 ~ 82.4 Hz), the largest amplitude in my output (through audacity) is around 247.2 Hz (third harmonic!). Is this possible or there is some problem with my guitar instrument?

EDIT4: Thanks for the responses. I understand that some issues could be around the guitar, recording instrument, and even the recording room. However, the important question is - In case of a guitar, what is a realistic (or most probable) relationship between a fundamental and its harmonics? (assuming a normal scenario, similar to when we hear someone play). I need to come up with the most probable mathematical relationship.

The output frequency distribution for plucking E2 string is: 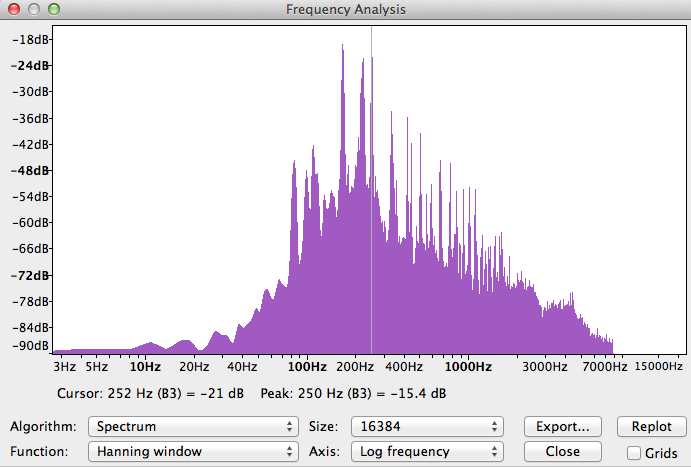 EDIT: Another sample for E2 string pluck (after properly checking the tuning and ensuring no other string vibrates): 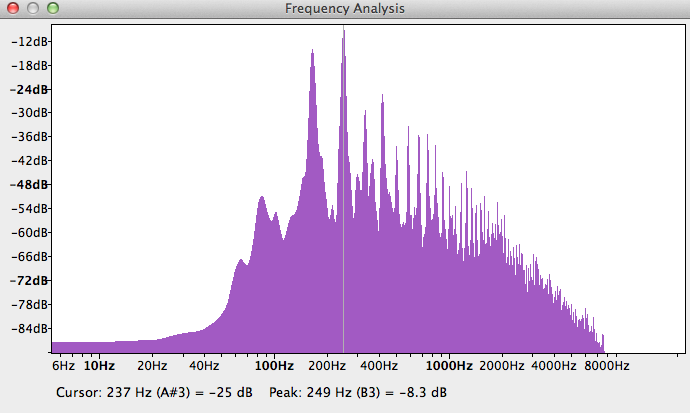 EDIT2: Sample for E2 when the string is plucked close to the center instead of near the bridge: 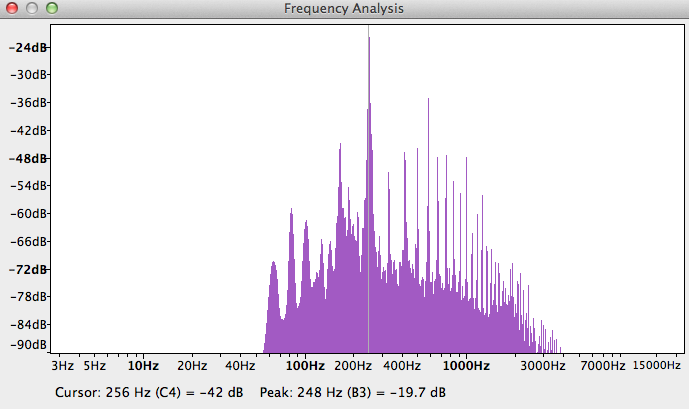 EDIT3: Sample for E4 (330 Hz - top most string) has highs at second and third harmonic. 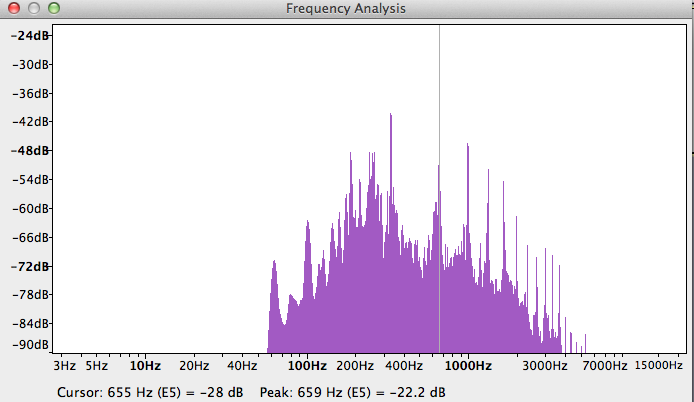 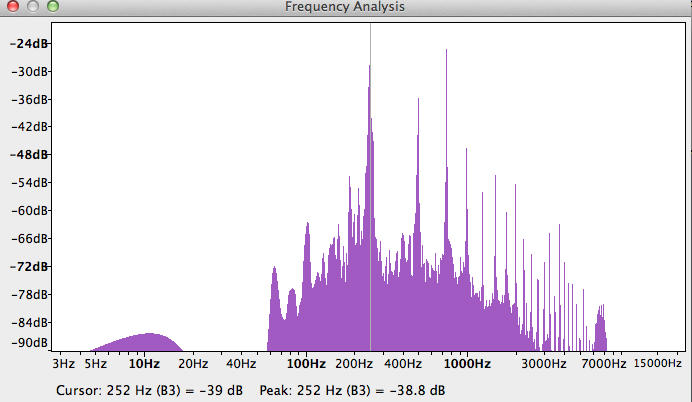 When you pluck a guitar string you are always generating all of the harmonics to varying degrees. For your E2

It would require a very special mechanical set to only generate the fundamental. However, any but the lower dozen or so (a) lie in the audible range, and (b) persist long enough to affect anything other than the tone of the note's attack to be work considering. The question is not so much, which harmonics are generated (they all are), it's a question of what their relative amplitudes are.

Theoretically, the precise spectrum measured from a vibrating string is a complicated function of how the string was plucked in conjunction with when the sound sample was taken. In addition you are taking measurements from a complicated wooden object through a complicated measuring device, which itself affects the spectrum of the sounds emanated.

How the string was plucked affects the degree to which different harmonics are initially excited by the attack (mathematically: the initial conditions of problem). Plucking near the 12th fret (the midpoint of the string) should be most effective in generating the fundamental tone. Using your finger rather than a plectrum should further help (the force is spread over a wider area -- this also reduces the initiation of higher harmonics). Conversely, plucking with a plectrum near the bridge (or the nut!) has a different timbre, which can be explained (perhaps not fully) in terms of the fact that different harmonics get excited by different plucking positions/methods.

These considerations are mainly based on consideration of an ideal string vibrating in isolation. In your data, the coupling to the body of the guitar (which has its own weak resonances) may be affecting the measured signal in a way that suppresses the fundamental relative to some of the lower harmonics (c.f. research into guitar body acoustics at the University of New South Wales). In addition, the observed spectrum may be further modified by the acoustic features of the room in which the collection was taken, as well as the response characteristics of the microphone (and possibly other components).

As a final note, I think it's entirely possible that you may have discovered that the conventional wisdom is incorrect, at least for the lowest notes on a conventional guitar (it might be worth checking if this feature is present for higher notes); but note that the listeners' ears will "fill in" the fundamental even if it is missing, the "Missing Fundamental Phenomenon". If I recall correctly, several of the example spectra from various music instruments in Music, Physics and Engineering (H. Olson) have this feature that the lower harmonics are slightly higher than the fundamental. Thus the lower amplitude of the fundamental does not affect the perceived pitch of the note.

Good guitars have the wooden top and body of the guitar carefully carved to resonate at a certain single frequency.

While the luthier is carving and bracing the top of the guitar, long before the guitar is assembled and the strings are put on, he repeatedly taps the top with a knuckle, as if it were a drum, and listens to the fundamental pitch it produces. He continues carving until the top resonates at a certain specific frequency.

If the top is not specifically tuned, then the guitar might end up having a certain resonant frequency that is a random artifact of its construction. I have come across more than one guitar like this.

So it may be that the body of your acoustic guitar has a strong resonant frequency of B. When you pluck a string and play a note which has B in its overtone series, that frequency is exaggerated in amplitude.

Could you provide us with the wave sample that you analyzed, so as we hear it ?

Also could you zoom the spectrum window from 150Hz to 330Hz... because at this zoom level, the curve is obviously not accurate at all, then provide us the image at this level ( from E3 to E4).

Maybe have you simply played a EM or Em chord wich contains a strong B at the fifth ;-) (just joking that's why it should be better if we had the wave sample)

What you could try also, is to put a thin parametric eq, with big resonnance, so as to cutoff only the 247Hz zone, and hear if that alter the pitch/note that you hear.

For the theory, you should look at the model of a string in physics. Because what you hear is only the result of the string vibrating. And all the resulting vibrating modes (harmonics) are related to the string length, and the mode 1, the fundamental, has the most energy, biggest amplitude (as far as I remember). Then you have modes 2, 3, 4 etc... which are waves related to the length/2, length/3, length/4 and so on... (length of the played string).

Overall, the understanding through various inputs and experiments run over music (self-generated and available on internet) is the following:

Something near 250 Hz is what you expect as 3 times the fundamental. If you draw pictures of a sinewave with no motion at the ends of the string, the 3 rd harmonic is the one with a peak in the middle at the same place as the fundamental, and also a peak (going opposite direction) at about 1/6 of the string length which is not far from the hole in the box, and also not far from where the string is normally plucked.

DaveDave
1
Add a comment  |
Highly active question. Earn 10 reputation (not counting the association bonus) in order to answer this question. The reputation requirement helps protect this question from spam and non-answer activity.

Not the answer you're looking for? Browse other questions tagged theory harmonics acoustics or ask your own question.

-2
What are the most common overtones of a vibrating string?
43
WHY do harmonics happen?
11
Sounds of harmonics
0
Guitar Frequency

62
Why Is Just Intonation Impractical?
3
What is virtual pitch?
4
What determines the relative volumes of the harmonics when plucking a guitar string?
3
Music theory book for classical guitar learner
6
Am I observing subharmonics using this method on guitar?
0
Accurate understanding of the physics of sound?
5
Can you change some composition I wrote to whatever music you want just by changing the timbre of the instruments?
19
Why is the 5th stronger than the 1st in guitar spectrum?
2
How to apply pinch harmonics? This isn't about how to play it, it's more about how to use it in a musical context?
13
What is the explanation for higher harmonics not being integral multiples of the fundamental?