Do sounds from different musical instrument merge together into one wave? [closed]

Ask Question
Asked 2 years ago
Active 2 years ago
Viewed 6k times
21
Closed. This question is off-topic. It is not currently accepting answers.

I am trying to understand what happens when two or multiple sound waves meet up or clash into one and another.

An example: Lets say I play middle C on the piano and a C an octave higher on the guitar at the same time, does these two sound waves merge and become one big complex sound wave or do they interact in another way?

Are there multiple ways/types of interactions sound waves can have depending on if I play the notes at the same time or not?

I am interested in the acoustics of this question

When two soundwaves play at the same time, nothing very complicated happens - they just get added together:

So, if they're mixed together like this, how can the ear still identify both sounds?

The reason is that the ear analyses things in the frequency domain. let's have a look at what that looks like: 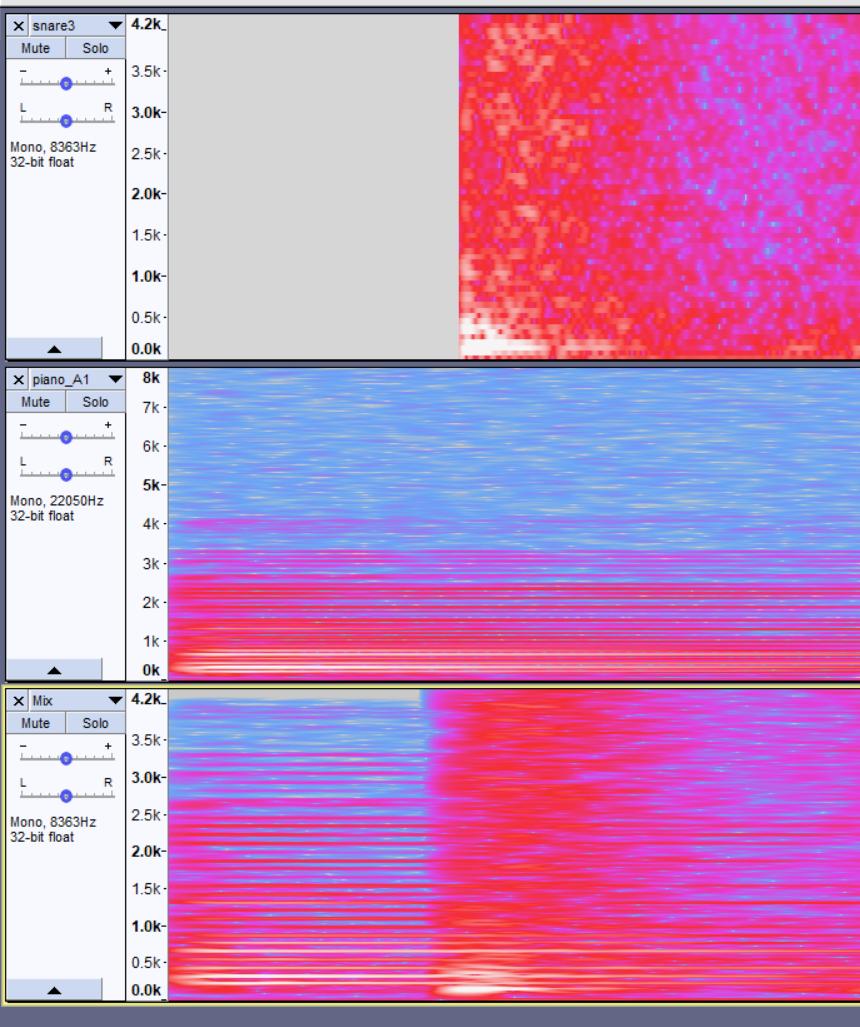 that's a bit of a rough picture - I'm sure someone can do a better one. But on the first (snare) track, you can clearly see that the sound consists of broadband noise, across most of the frequency spectrum, while on the second (piano) track, you can clearly see the horizontal lines representing the harmonics of the note. If you look at the third (mixed) track, you can make out both - the harmonics of the note first, and also the area of broadband noise when the snare hits. So here we can tell 'by eye' that both sounds are happening, and that's more or less the trick the ear uses too.

Of course there are occasions when the presence of one sound affects the perception of another. This is known as masking.

Yes. At your ear there can be only one momentary air pressure. The values of this through time can be represented as a very complex waveform - which our brains can be very good at analysing as several distinct instruments. (Our brains can also be easily fooled!)

I asked myself the same question several time, and frankly the answers I see here would have only partially satisfied my curiosity (topomorto's one being the one that gets closer to that), so I will try to add my two cents and make it more and more complex at each stem

1 ] Generally speaking, and with some degree of approximation, yes: sound waves "merge" into a more complex sound wave and nothing special happens, as the resulting wave is nothing but the sum of the two original waves.

This is a phenomenon (or better, a property of several phenomena) called linearity. When specifically discussing about waves one refers to the Superposition Principle, which is the basis of stuff like constructive/destructive interference: 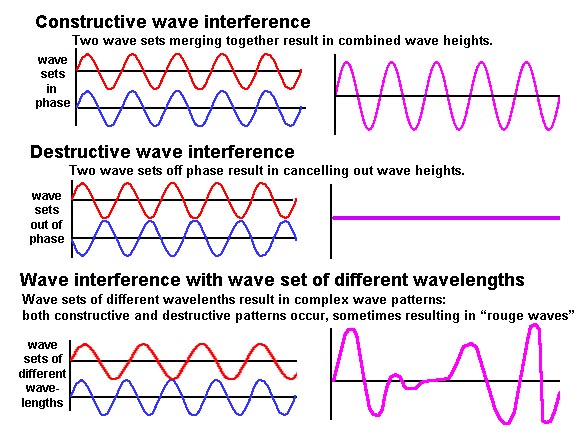 Since sound waves are usually not boring sine waves, these illustrations should just give an idea

[edit: meaning that it's very unlikely to have such simplified A+B = 2A and A+B = 0 cases with two different complex soundwaves...]

2 ] ...but please always remember that sound is waves moving in a three-dimensional space, so to visualize a bit better what's happening take this nice drawing here

and add one further dimension: imagine spheres instead of circles. So yes, two sounds merge, but they do so differently in different points of space - which is, amongst the other things, why you are able to distinguish which instrument is playing on your left and which on your right, as the way in which the waves will sum at your left and right ear will be different..

3 ] ..and furthermore, all this is definitely nice, although in real-real-world linearity is an extremely rare property, and only holds for certain cases. Luckily, when talking about sound, "most" of what happens is very well described in terms of linearity, but just as food for thought one should mention that there are subtle, minimal differences between reality and the physical model.

Other answers added extra phenomena to the game, but I think that goes beyond the question. Speaking about the sound waves generated by two (or, well, more) instruments, this should pretty much sum it!

edit: I see now that you also asked about what happens if sounds are not generated at the same time. Well, it doesn't really matter so much, the principle is the same. If the two fishermen in the above picture had cast their baits at different times, then the earlier one would have created waves that would have travelled farther (a bigger outside circle) and met the other waves in differenet points. The underlying principle remains the same!

Sort of, although the meaning of this can be debated by philosophers for hours.

In a space, sound waves emanating from any point will be effectively added up in any point, in particular the point you place your ear or microphone in. However, because of the propagation delay, a small phase difference generally appears even when moving the ear or microphone a relatively small amount of space, and if you should happen to have multiple ears or microphones, you will end up receiving multiple signals which each represent the sum of all the individual instruments audible in their locations, and the signals will generally not be equal. Besides propagation delay, there's also attenuation and reflection, and if the ear or microphone happens to be big and include multiple sensor elements for different frequency ranges — as mammals' ears usually do —, a philosopher may ask if the signal recorded by such an ear is to be considered a single signal or a sum of multiple sub-signals.

Acoustics is complicated. Fourier theorem is but its cute introduction.

All of the other answers here tell you pretty much everything you need to know if you want to record a performance. But there's a difference between listening to a recording and actually being there.

Sounds coming from different instruments in the ensemble (and even from different parts of the same instrument) follow many paths as they reflect of walls, floor, ceiling, and everything else in the room on their way to your ear. Part of the "liveness" of a live performance has to do with how sounds following different paths re-combine at any particular point in space (e.g., at the diaphragm of a microphone, or at the diaphragm of your ear.) That's part of the picture, but there's another part.

Microphones on stands generally do not move and turn while the musicians play. Your head does. The other aspect of "liveness" is how the sound changes in response to you shifting in your chair, nodding, or turning your head. I'm pretty far from being an expert in the physiology of sound perception, but I believe that the correlation between how you move, and how the sound of things changes when you move plays a role in how your brain turns sound into a sense of the space that encloses it.

7
How do multiple sound waves interact physically to create music?

2
How does one isolate a specific tone from an audio file?
1
How does speaker design affect audible sound?
4
How can a musician determine the sound of different musical artists?
2
How to make the sound move from one channel to the other?
2
Can a guitar pickup be eq'd to imitate a different wiring from its own?
7
How do multiple sound waves interact physically to create music?