How do I apply major scale on the guitar? [duplicate]

How do I apply major scales while I am playing on the guitar? I am totally confused because all I see are videos of people pressing on single strings.

As topo says, the major scale is purely a set of notes played in order - ascending and/or descending. Somewhat like the alphabet - ordered letters.

So, once the notes in a set are known, they can be tagged together in some order, with longer and shorter ones, to produce tunes. That's how to apply those notes!

Like others have said a scale is just a series of notes in order. For example a c major scale would be C, D, E, F, G, A, B, C, which is starting on the root, then whole step, whole, half, whole, whole, whole, half back to the root an octave up. (remember there is a natural half step between b and c and between e and f) This can be played on one string, for example the 2nd string (b string, second thinnest string) starting on the 1st fret which is C. Then frets 3, 5, 6, 8, 10, 12, 13. On a piano you could think of this as all white keys from c to c. On a piano things are all very linear but not so much on a guitar once you move beyond one string. You could also start this down an octave on the 3rd fret of the 5th string (A string), and then play 3rd fret 5th string, open 4th string, 2nd fret 4th string, 3rd fret 4th string, open 3rd string (g string) etc. This would be an open position C major scale starting on the 5th string, 3rd fret. 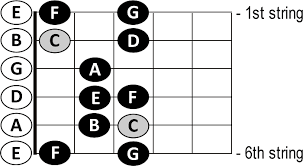 You can start a C major scale on any C anywhere on the fret board if you know where the next notes lie. A good book or perhaps some private lessons might help you. But until then maybe google how to spell a major scale if you don't know how, then get a good fingering chart to learn where at least the open position notes are on the fretboard, and then try to figure out how to play the scale you learned how to play using your newly found knowledge of the notes on the fretboard. This may also help:

This is the simplest version. I'd suggest Andres Segovia scales for classical guitar.

Not the answer you're looking for? Browse other questions tagged guitar theory or ask your own question.

43
Why learn scales? What are they for?

9
What is a good solo to learn in the major scale?
8
How to play upstrokes with our hand when playing an acoustic guitar?
10
guitar scales: where to start
6
How to master the guitar fretboard
4
How to play guitar and sing at the same time?
9
What's the CAGED system good for?
2
Confusion about C Major Chord on guitar
0
How to Play any Major Scale on Guitar
3
Assymetry in major scale construction