How can I make any knob on any pedal controllable with an expression pedal?

I have a Fuzz pedal for my bass and I would love to be able to control the Fuzz level with a (wah-like) pedal instead of bending down and turning the knob with my hand.

I am thinking of one of the two following possible solutions:

2) reroute the rotaty control form the knob to the pedal.

Is any of that feasible ? Or is there an easier way ? If so, what do I need in order to build it ? I'm completely lost here and don't know where to start

If you just want to be able to give the control a tweak with your foot now and again, rather than needing to 'ride' it, the simplest solution is probably an option knob: 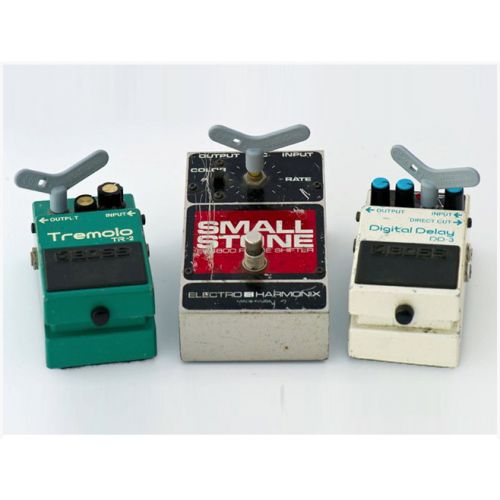 If you really want to be able to use an expression-pedal-like controller, you'll need to modify the pedal so that the part of the circuit that was routed through the potentiometer is routed out to a potentiometer providing a similar range of impedance in a (custom-built or modified) foot controller. It won't usually work with an off-the shelf expression pedal, and as Todd says in the comment, you won't be able to re-use the same expression pedal for different controls on different stompboxes.

I'm sure a mechanical solution would be possible too, or an electrical solution using a small motor (both of which could then be more generally usable with any knob on any pedal), but I'm not aware of anything available off-the-shelf and as a custom build I imagine they'd be harder to make than the custom expression pedal solution.

If you're really interested in getting a lot of realtime control under your feet, it's possible that you might want to look into using a configurable multi effect box, rather than traditional pedals.

Not the answer you're looking for? Browse other questions tagged guitar-effects effects-pedal or ask your own question.

6
Switching amp heads with pedal
2
Simple delay pedal with more headroom
6
Distortion Pedal with Expression Pedal
2
Chaining MXR Super Badass with Wah Pedal
4
Choosing a guitar stompbox for producing moderate distortion (general advice)
3
How does the Digitech Freqout pedal work?
2
Can I use the G2 Pedal to simply act as a volume pedal?
0
How can I make a clean overdrive effect?
4
Using an expression pedal with a PC?