I'm writing a song in C Aeolian/Dorian (the verses are in Aeolian and the chorus is in Dorian). And I came up with a weird chord progression for the end of my chorus:

My question is why does the D sound right at the end? Usually, songs end with a tonic (I, vi, etc.), but the D here, as far as I can tell is a dominant of a dominant (V/V). It's the dominant of G which is the dominant of C. Just looking at this progression, it wouldn't seem like the ending would sound resolved, but when I play it, it sounds great. Can anyone explain the theory behind this?

Out of context, the progression seems to establish Bb major as a tonic, then plane up to D. It could continue further - try my first suggestion! Or we could return to functional harmony and resolve the D to Gm.

A lot of music is functional, all about dominants and tonics. A lot isn't. And a whole other lot is a mix. You can go mad trying to find a functional justification for an ending like Bb, C, D - but it's very popular! Just let it be 'planing' - the same chord shape shifting up or down in pitch. Semitone planes work as well, Bb, B, C is another popular ending (in the key of C). Don't sweat over justifing the Bb as a functional harmony - just accept it as 'two under C' so a good starting point for a plane ride up to C.

Take in the message of the first part of this answer, and the first musical example. Yes, it's possible to end satisfyingly on D. But it's JUST as satisfying to carry on up to E! In functional harmony, you KNOW when you're home. In this freer style, free from the tyrrany of the leading-note, there's a wider choice of resting points.

I know it's been a long time since someone posted this but I came across it by accident while doing some work online and it caught my attention.

The answer lies in the Bb7 which wants to go to Eb, you then raise the chord to a C major. This would be Bb major/ C minor/ D minor(D diminished)/ Eb major: In the key of Eb.

Instead, you have substituted from the parallel key (C major is a III of Eb or a I of C minor)

The D major would seem like it doesn't belong, but then again you have moved up from a C major and are already heading toward that implied destination (Bb C D...Eb!) but not played the Eb major, starting on the Bb7 (since it's a dominant chord) it is implied there will be an Eb to the ear.

You have then planed up and finished on the D major, again implying an Eb and its third G (which also happens to be the 4th of D). Since Cm and Eb are interchangeable as in (i>III or I>vi).

It still is relatable to the C minor tonal center of your piece while leaving the listener in an ambiguous state. Without realizing it, you have maintained that tonal center. Everything you play implies an Eb and what "doesn't fit" still retains enough of that C minor Eb major.

Even more can be said, for example, D sits between the C and the Eb being both ones IInd and the others VIIth, and "hears" the thing (oh god puns) that's, generally speaking, a Locrian based diminished chord and we substitute them all the time in music outside of jazz because they are just so unstable. So throwing a D major in there isn't at all uncommon. I'll leave it there for now. It's a wonderful Cadence, my friend.

Here is the reality: there are no incorrect chord changes.

There are only varying degrees of stylistically unconventional chord changes.

Most likely you are taking common practice harmony conventions, which is what most harmony theory texts teach, which in a nutshell is the harmony style of composers like Haydn from the eighteenth century, and applying that to a pop/rock style, or whatever is your personal style.

Your chord progression doesn't really do anything to set up a tonic/dominant relationship in the common practice convention. So don't use that convention for analysis.

Just looking at this progression, it wouldn't seem like the ending would sound resolved, but when I play it, it sounds great.

It doesn't sound resolved. But, that doesn't mean that it can't sound good.

"Good" is too vague for analysis. The problem is the question is based on just a chord list. In comments you hint at voice leading and interaction between accompaniment and melody, but we don't know what those details are. You should post a score. 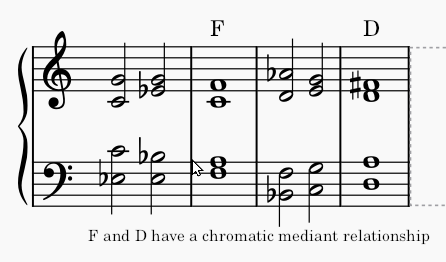 Or, I could grouping chords in pairs to structure and phrase around possible scales/tonalities...

Assuming your progression repeats, I wondered how to make sense of D major to C minor. Both chords match the G harmonic minor scale. The roots are separated by a whole step. I could see the other chord could be paired up with certain scales. And the tonics of the scales could be selected to make each pair a rising sequence. Then you can try giving it a melodic idea. After shifting the bar line it could be like this...

I doubt any of this is like whatever you are doing with rhythm, voicing, melody, etc. But the point is to show that a mere list of chords isn't enough to explain how something works.

My question is why does the D sound right at the end?