What do I need for my condenser microphone to work correctly?

Now, I do know this question had been asked a thousand times, but I do have other questions along with it, so here it goes.

Couple of months ago I've bought a condenser microphone which I am intending to use is for either voice acting or singing. I haven't thought that it would require anything else what so ever so I assembled it, with the pop filter and all and plugged it into my computer (which is a desktop PC). When recording my voice I realized that it sounded quiet, so I increased microphone volume and what I got was a lot of static sound in the background (with my voice recording being louder as well, obvious is obvious). At that point I had realized that the microphone came with a manual which I had read through (sort of.) and came to conclusion that I need phantom power and a external power supply?

I know what everyone would say to just "follow the instructions and buy those two" but I also decided to look up answers on other sites and some people mentioned getting an amplifier or an amplifier with integrated phantom power which just goofed my plans up.

So which one of those three do I actually need? I do have a desktop pc with a onboard sound card (which I assume won't do) and the condenser mic I can't use because it needs a 48V phantom power or whatever.

Condenser microphones almost always need phantom power. This is a 48V voltage that is usually supplied to the microphone from the mixing board or mic preamp by the XLR cable. If you're using an XLR-to-stereo-mini plug then it's probably not going to work.

You could buy a USB audio interface. Just make sure it has an XLR input which supplies phantom power. This usually manifests as a little button/switch next to the XLR input. You turn it on and the interface sends a voltage to your mic.

Alternatively, if you want to try and plug your mic into a stereo mini input or 1/4" instrument cable input, you'll need something like a phantom power supply. Ideally this would have the correct output to connect to your video card, but you might also need an adapter to connect its audio output to the audio input on your sound card.

If you are hearing anything at all, I consider it likely that Tetsujin's guess at a Newer NW-800 or its ilk is correct. This is an electret condenser of not all that impressive quality with the most endearing trait being that it will even run off the 3V a typical notebook microphone input delivers as "plugin power" while giving somewhat better results when run off 48V phantom power.

Getting a reasonably good USB interface with phantom power is not going to be a waste of money: you can always use it for an actual condenser mic needing 48V and its preamp will definitely be better than what your computer has built-in.

For voice acting or singing, you even might end up with a dynamic mic not needing phantom power at all. Still, the preamp of your computer's built-in microphone input will very likely be too crappy to enjoy the results.

I'm assuming you have one of the myriad varieties of NW/UM/BM-700/800 [which all appear to be identical just with different labels & in a selection of garish colours] available for a tenner from China. 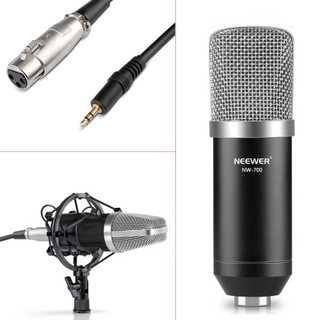 By far the simplest way to get these working is by getting a USB pre-amp.
This can be used as a 'sound card' and also phantom power supply, direct from your USB port, without needing an additional external power supply. 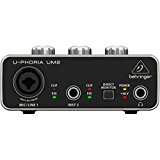 They run from approx £30 to many hundreds, depending on number of inputs/features etc. All you need as a basic starter kit is 1 mic input with phantom power.

You also need a male-female XLR cable which will connect to the pre-amp's mic input, which those mics are not supplied with.

Not the answer you're looking for? Browse other questions tagged voice recording amplifiers microphones or ask your own question.

6
Why are condenser mics so much more expensive than dynamics?

2
USB microphones for multi-instrument recording
6
Home recording: Preamp or Dynamic Mic?
3
Which type of microphone is optimal to use for the singing piano player?
1
Scarlett Solo Gen 2 Interface Picks up Audio but Windows doesn't receive anything
0
I need help with my microphone
1
USB Audio Interface or Phantom Power Supply?
3
What cable do I need from Dynamic mic into mixer and why XLR to TS but not XLR to TRS?
1
Mic-->48v Heyden Phantom power (XLR)-->USB MIXER(XLRinput pin)