Why is the last semiquaver outside the last triplet of the measure? 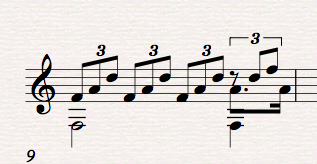 Correct me if I'm wrong but the last semiquaver isn't going to be played, right?

Lets say each quaver is getting one foot tap. Foot tap for F and dotted A, a second on D and the final foot tap for F. Correct?

Why did the notation software add the last semiquaver after the "vertical axis" of F note? why it is not aligned under the F ?

Why is the last semiquaver outside the last triplet of the measure?
Because it should be!
You can think of the last quarter beat of the measure as being divided into three voices:
a) An eighth rest and two eighth notes (D51 and F5)
b) A dotted eighth note and a sixteenth note (A4 and A4)
c) A quarter note (F3)
The last eighth note of voice a) should be placed approximately one third from the end of an imagined full quarter note length, while the sixteenth note of voice b) should be placed one quarter from the end of this imagined length.

The last semiquaver isn't going to be played, right?
Wrong! Voice b) is the melody! The other notes are (mainly) accompaniment.2
Listen to this recording and you will understand how it should be played. The sheet music or notation used for that recording might not be identical to yours, but you should get the idea.

The music, "Piano Sonata No. 14" (in C sharp) by Ludwig van Beethoven, is a piano sonata that in your sheet music has been adapted for the guitar. It is nicknamed the Moonlight Sonata, (or in French Sonate au clair de lune).

1The notes sounding on the guitar is actually one octave down, but I chose here to write the octave numberings generally associated with the lines of the staff.
2This is a slight overstatement in order to emphasize the importance of voice b).

Even though this question has already long been answered, I thought I would show a picture of the note durations in case it helps someone. The time of a single quarter note can be filled many ways:

So the rhythm Beethoven uses here is:

You can see how the notes are staggered.

First of all, this has nothing to do with "solfege".

Secondly, Clair de Lune is composed by Debussy and isn't played (or named) "Adagio sostenuto". This is a bar from Beethoven's Sonata #14, usually just called Moonlight Sonata (this shows it in d minor instead of 'c# minor` which is the original key).

Regarding the music: the passage is mostly fine. It's not what was originally written, but the result would be close. What may be throwing you off is that if this passage were really written with the last quarter note (crotchet) on beat 4 the preceding half note (minim) would either have a quarter beat (crotchet) rest after it or it would have a dot added so it was 3 beats.

The top two voices are correct. The bottom voice should be a whole note (I guess what you would call a "semibreve").

Not the answer you're looking for? Browse other questions tagged notation sheet-music rhythm classical-guitar or ask your own question.

7
Why triplets for whole movement rather than writing it in say 6/8?
8
Notating 6 (or more) triplets with a single beam?
3
How to play this rhythm in Beethoven's Moonlight Sonata? as a 4/3 polyrythm or as 6/16?

5
Is it wrong to alter bar numbers after repeat endings so they reflect the performance progression rather than the last repeated measure +1?
2
Why is this section on the measure 'grouped' with a 3?
2
What's the minimum number of measures in the last system
2
What does this up bow/strum symbol at the end of a measure (in a classical guitar piece) mean?
6
How do I get chords that last half a measure to display correctly in 6/8 in LilyPond / Frescobaldi?
2
how to count a measure with dotted and triplet rhythms
2
How do you begin a 16th note triplet on the last third of an eighth note triplet?
6
How to write rests in triplet semiquaver groups