What's the purpose of the dual saddle on my 12-string guitar? 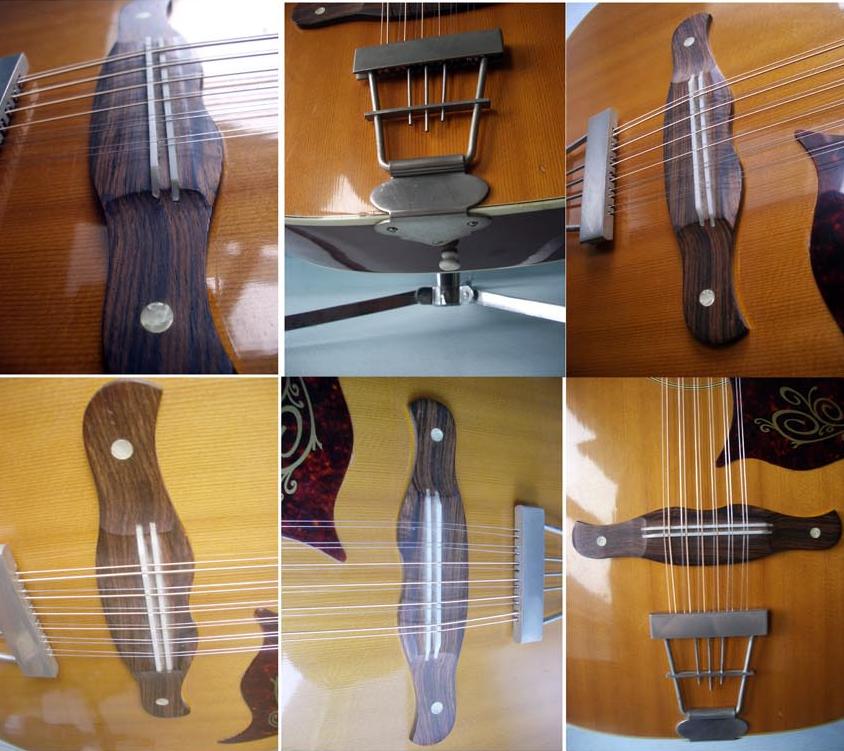 The Harmony catalog description, at that site, says "...dual-saddle bridge..." The strings are set deeply into the lower saddle and ride somewhat on top of the closer, shorter saddle. What is the mechanical/acoustical point of the dual-saddle?

My suspicion (a guess really) is that a regular saddle and pins bridge will locate the strings sufficiently that no other guide slots rare required, but with the combination of 12 strings and the tailpiece hanging from the bottom of the guitar, the strings would move more than would be desired (potentially touching when played?), so the second slotted saddle is required to positively locate the strings at the proper separation.

Based on some discussions about building a 12 string at a Luthier's meeting, I suspect that the dual saddle addresses a couple of issues with the string placement and saddle forward tension.

On 12 strings that use bridge pins, the close sharp angle into the bridge helps keep the strings in place across the saddle. With a longer tail on the strings going to a tailpiece, the aligned force pushes the strings inward. Slotting a single saddle on a non-floating bridge isn't usually recommended for guitars, so adding a second saddle for the slots allows the string break across the main saddle without the sideways tension.

Another issue with the 12 string is that the extra set of strings adds more forward tension on the saddle, which can cause warping or breakage of saddles that are set high. A second saddle that takes some of this tension could distribute the load more evenly across the bridge.

Edit: although looking at the pictures I'd guess the second saddle is primarily for string alignment.

If I had to hazard a guess, it would be that the maker of the guitar realized he or she could transfer more energy to the sounding board with the addition of the second saddle.

The saddle further from the frets doesn't change anything tonically, since the mode of vibration is defined by the closer saddle. But it's imaginable that if the sounding board is vibrating significantly, there would still be some energy available between the first saddle and the tailpiece.

Even if this didn't increase the volume, the maker may have decided to do it just because it changed the sound of the instrument without degrading its pitch-performance. Any change is a candidate for that unique characteristic that makes your instrument the one everybody wants to buy!

EDIT: Another possibility is simply that the saddle that the maker was using had only ever been used for six strings before... perhaps he or she was worried it would break under the tension of 12 strings. So, divide those forces in half by using two pieces and no more worries!

My answer may be completely erroneous, but I know that a deep bridge groove for the string has a dampening effect on the string, and I know a deep bridge groove also provides more stability for positioning of the string which might be required with paired strings coming out of a trapeze. It seems logical that a second bridge with no deep grooves would allow the strings to ring free much more like a fret, an attribute which may be appealing to twelve string artists and fans.

12
Factors in choosing a replacement saddle for an acoustic guitar.
7
12-string acoustic guitar - how do nut and saddle materials affect tone?
3
Under-saddle pickup not picking up the low E string
7
Why does the bridge saddle on a steel-string guitar sit at an angle?
3
How can I lower a plastic acoustic guitar saddle?
1
Guitar strings, high action but not touching saddle
1
Adjusting the saddle
1
Electric Guitar String for Acoustic Guitar String?
0
How do I change the string on this guitar?
3
Guitar String Ringing