Are there theoretically 46 keys in total? [duplicate]

Ask Question
Asked 3 years ago
Active 3 years ago
Viewed 207 times
0
This question already has answers here:
How many (major and minor) keys are there? Why? (7 answers)
Closed 3 years ago.

Here's what I did:

Starting from the lowest C on a grand piano, I went up to the last 88th key C in perfect fifths to see how many sharps there were in all sharped major keys, then from the lowest C I went up perfect fourths to see flat major keys there were. Then I did the same for the minor keys starting from the first A key on the piano going up fifths and then going up fourths (you can also go down fourths from the top key for the flat major or minor keys). Here's the chart I came up with while doing this: 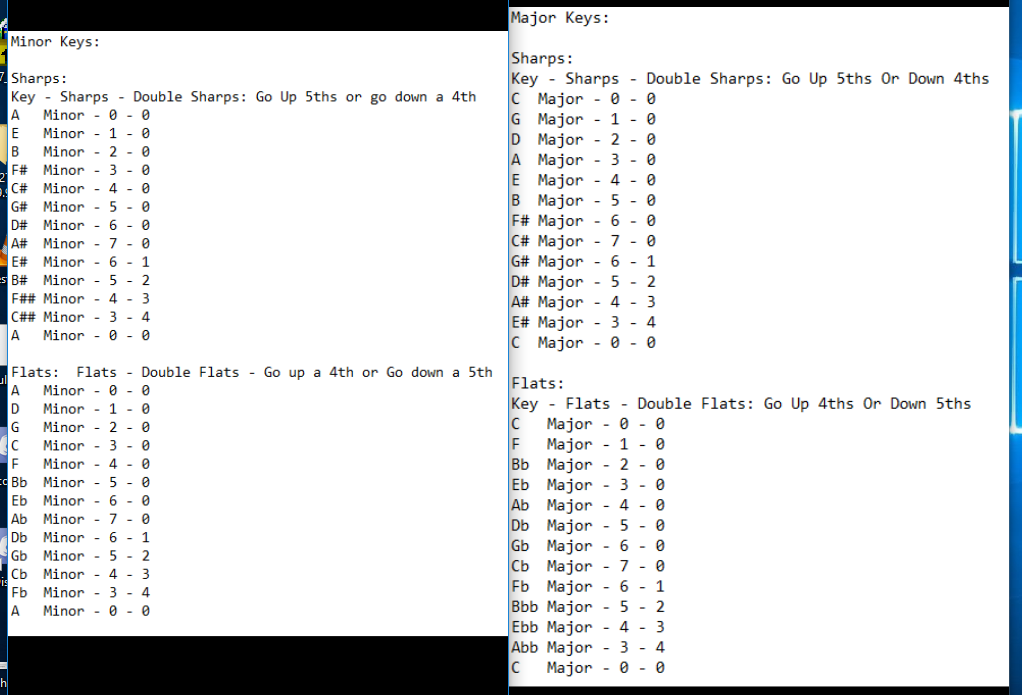 Although a lot of the keys that have double sharps and flats and odd keys like E# Major and Fb minor are theoretical, very far from practical, I would never imagine anyone using C## minor instead of D minor unless you're going into C## minor from a key that has a bunch of sharps and double sharps, which are still unlikely to be used I'd imagine.

Is this correct? Are there theoretically 46 keys? Or did I miscalculate or misinterpret something?

What's wrong with the D𝄫 major scale? It goes D𝄫 E𝄫 F♭ G𝄫 A𝄫 B𝄫 C♭. Basically, you can go on as long as you don't run out of note names. Whether the scales end up just as renames of simpler scales depends on your tuning system. 12-tone equal temperament (12-TET) typical for a lot of current Western music wraps around after 12 scales, but there is also 19-TET or 31-TET dividing a diatonic whole note into 3 and 5 steps, respectively (with an accidental causing a change by 1 or 2 steps, respectively, and the "natural" half steps E-F B-C being 2 or 3 steps, respectively).

And of course there are non-equal tuning systems where ending up at your starting point might never be the case, strictly speaking.

First you need to decide whether you are equating enharmonic notes e.g. F# / Gb and C/ Dbb.

If you are then there will be a maximum of 12 notes. Count how many distinct keys in an octave of your piano. As you go around the cycle of fifths, you will at some point need to switch to an enharmonic equivalent. The most common place is at F# / Gb but other locations are possible. Double flats and double sharps can be avoided as there are simpler ways to spell these notes.

If you are not equating enharmonic notes then you move into double sharps, triple sharps etc without limit. You have "math" in your name so I will add this comment. Going up a well tempered fifth raises the frequency by 1.5. This will never exactly equal a whole number of octaves. Try to find m and n such that 1.5^m = 2^n. It can't be done.

I will now assume that you are using equal temperament and equating enharmonics.

The minor version will just be a rotation of this.

Look at Bach's choices in the Well Temprered Clavier. 12 major and 12 minor were enough for him. Several other composers have done "all the keys" and only found 12.

Substantially edited based on comments. For example, I now see that the range of the piano was not relevant. However, I also noticed an error in your list.

26
How many (major and minor) keys are there? Why?
25
Why is music for strings more likely to be in keys with sharps?
17
Are there any rules of thumb for shifting the key signature within a tone net?
3
Is there a name for this phenomenon in the circle of fifths?
8
Why do we have key signatures as they are? Could a key with unconventional accidentals make sense?
2
In difficult keys, is it really best to think in terms of accidentals?
4
Memorizing major and minor keys by ascending and descending by whole step - good idea?
5
Why do the keys in the circle of fifths have the pattern of accidentals that they do?
1
Why do parallel keys matter?