What's the proper right arm position for an electric guitar?

With my classical guitar arm positioning has never been an issue. I just rest my arm naturally on the body at the crook of the elbow: 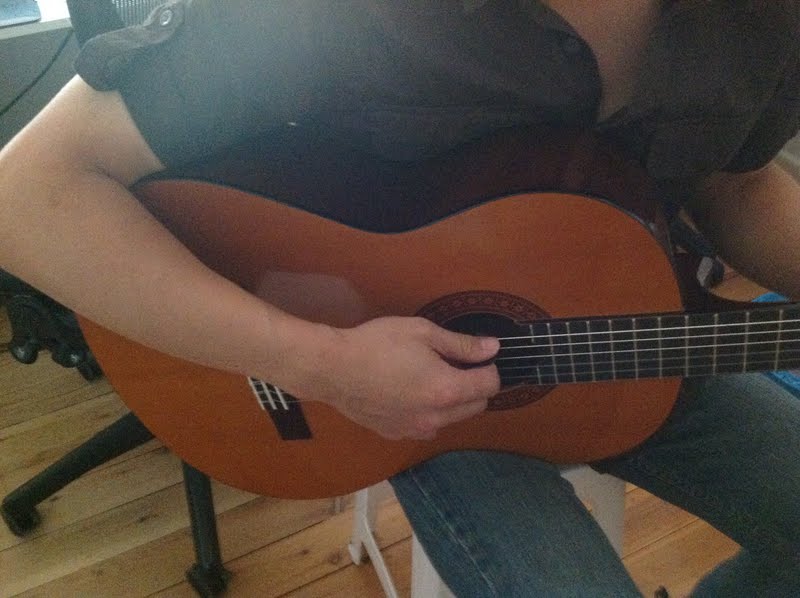 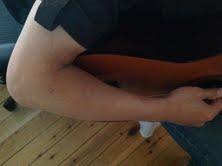 I feel like I could sit like that for hours. My electric guitar has been a struggle. The first position I was told to try was to rest my arm a bit past the elbow: 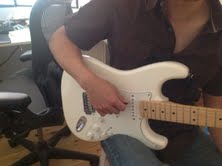 This feels pretty awkward and my wrist doesn't look so good 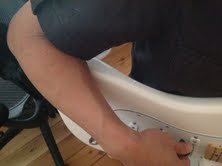 I have been playing around with resting at the crook of my elbow: 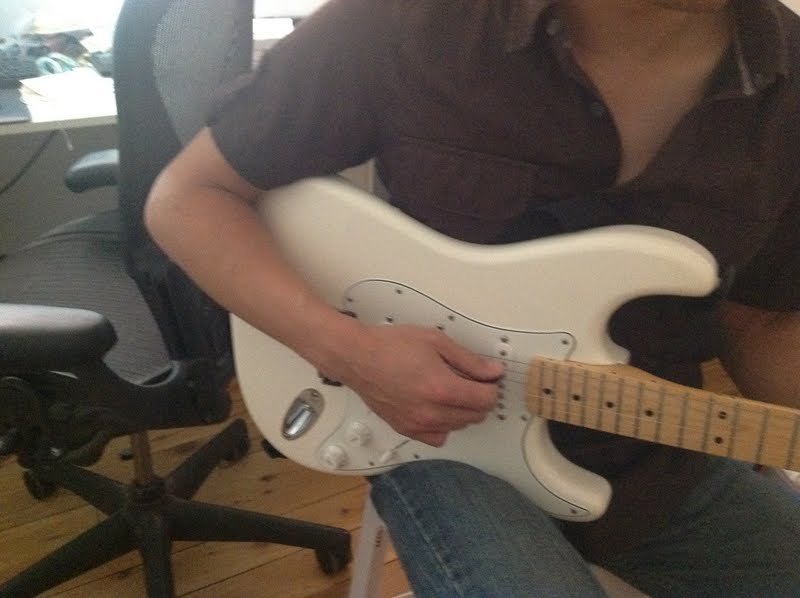 It seems better on the wrist: 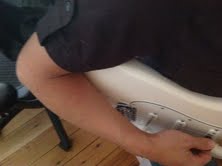 But I get pins and needles in my right arm after only about 10 minutes in this position. It's almost as if the thinner body of my electric guitar is digging into my arm and maybe cutting off circulation? What's the right way to position my right arm for good ergonomics and comfort?

I don't rest my arm on acoustic or electric guitars, as it would severely impede my playing.

If you are sitting, I would suggest moving the guitar to your other leg - this changes the angles such that your arm won't rest on it any more.

I would suggest standing though - you have a much wider range of positions.

I sometimes rest my little finger on the scratch plate if I am doing some delicate picking, or I may rest the side of my hand on the strings if playing heavily damped, but most commonly I would have my arm relaxed so the hand is next to the strings.

This gives you speed and flexibility, and won't give you pins and needles.

As an example, my bass player is using his fingers and my rhythm guitarist and I are using right hand damping in the picture below. 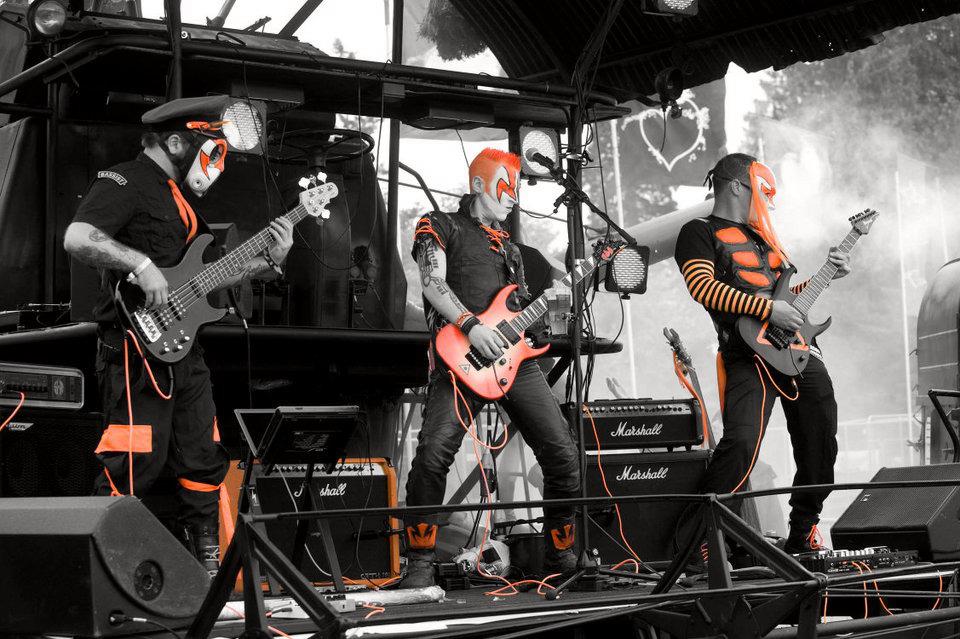 I agree with @Dr Mayhem that the way the guitar is sitting on your leg may be a problem. Also, are you leaning forward (crouching over the guitar)?

You could try playing standing up, and adjusting the strap to try to find a comfortable position. When you do, you can see if that continues to work when you sit down. If not, you might try a more stool-like seat, so your legs are not as scrunched up.

To a certain extent it may depend upon what kind of music you are playing, and what the R.H. is doing.

When playing single-line stuff (riffs, melodic lines etc.) a lot of electric players would rest the heel of the hand (near the wrist) on the guitar, either just above string 6 or on the bridge, or if playing on the highest strings actually resting on the lowest strings. This makes it easy to play quickly and accurately as the point at which you are resting your hand is close to the point at which you are playing. (This small distance is crucial to accuracy; when teaching I use the analogy of trying to write holding a pen in the usual way, or trying to write holding a pen at the end opposite the nib, which is less accurate.) Resting on the lowest strings also damps them, which is particularly useful when playing with distortion or at high volume.

I'm a Telecaster person, and not a great fan of Strats. But one thing I do like about Strats (especially when my pupils are playing them!) is the way the edge of the body leans back, which suggests a good, comfortable position to rest the arm on the guitar - with the middle of the forearm resting on the body, slightly diagonally down towards the strings.

In your classical position, you are resting on the right leg, whereas typically the waist of the guitar rests on the LEFT leg (so that the lower bout is between the player's two legs -- you can find pictures or video of classical playing). Also, the neck is usually tilted so that the peghead is up higher in the air. Both these things mean that the right arm would be rested further from the elbow (further toward wrist).

With plectrum 'spanish' guitar -- particularly thin or solid-body electric -- arm positions vary wildly (as does most everything else). Not all of these positions are used strictly for ease or quality of playing -- many are just used for 'looks' or appearances, or to be able to stand while playing.

Note that (kind of in reference to the rock/metal band photo above), having the guitar hanging low (or peghead tilted low), will not only alter right arm position, but will also greatly affect LEFT hand position (detrimentally for certain scale/arpeggio playing, in my opinion -- although many many blues and rock players do it this way, and it works for what they do). The 'proper' left hand position should allow the wrist to be straight with the forearm, and allow the left fingers to spread and stretch out along the neck -- and usually without the thumb wraping around the neck. While many many guitarists, particularly in rock and blues, have the guitar hanging low (and yes many are great musicians), notice that they would not be able to play certain scale or single-note arpeggio forms in that position (as well as missing many advanced chord-forms).

For me, it seems that the right ARM position while using a pick, is usually different from that when using a classical guitar. Remember, the classical bodies have the necks join the body at the 12th fret -- though often having as long, or longer scale lengths than a lot of folk and electric guitars (particulary Gibson). Electrics and plectrum acoustic necks join usually at the 14th fret and higher (esp. electrics). This means that resting the waist on the RIGHT leg allows the neck to be pulled closer in front of the player's body. This also moves the lower bout toward the right elbow joint. On a plectrum acoustic guitar, when I play true 'rhythm', my forearm never rests on the body, and only the upper arm rests fairly lightly on the edge of the top of the lower bout (btw, I really like armrests on my guitars; note some guitars have them or have chamfers on the body -- check out Greenfield guitars).

In my opinion, single-note scale and/or arpeggio playing requires some sort of 'reference' for the hand to 'know' where the strings are. This should NOT be anchoring the right-hand or arm anywhere to the guitar. It should just be light touching, brushing, and/or palming, usually against adjacent strings, pickguard, or top. And it depends upon the musical passages, which of these is appropriate. True rhythm guitar does not have the right hand or fingers resting on the guitar (and again, certainly not the forearm either). The right hand flecks up and down, quickly, at the wrist, which is shaken by the forearm (which in turn is why forearm cannot rest on the guitar body). The analogy given by W.G. Leavitt of Berklee said something like 'imagine you are trying to shake a bug/spider off the back of your hand'. In classical guitar's apoyando (rest stroke), there's usually a finger and often the thumb also resting on a string. And in tirando (free stroke), I frequently lightly rest the thumb or edge of it on a string (unless it's plucking already). With arpeggios there are often finger-plants (in preparation for plucking) or thumb rests as well.

In any event, no body part should be resting on the guitar to the point where it is 'anchored' (this also applies to many other musical instruments I believe). The other poster is quite correct in saying that -- while it might seem a more secure way at first -- it will ultimately hinder playing ability.

Now on solid-body electrics, because of the plethora of (often ridiculous) shapes, all bets are off! But a Les Paul or Strat or Tele or related shape should be more like a flat-top or archtop -- in the way that it's held -- than, say maybe, a Flying V.

Ultimately, 'rules' ARE broken all the time. But just because you see some pro-player (particularly in the popular music genres) using some unorthodox or unique technique or playing position, it doesn't mean THAT is what made them great. They usually became great in spite of those things, and not because of them -- because they were so naturally talented and/or success driven to begin with.

This is such an important question to consider. You should feel blessed that have reached this point of indecision of how to hold the electric guitar at this phase, because when first switching to electric guitar from a different instrument is when bad habits are often formed.

24
How to hide a flat pick in the right hand when switching to finger picking, Warren Haynes style

3
Electric Guitar | Right hand position
5
Right hand position for electric guitar
5
What are the correct mechanics for a guitar F barre chord
6
Flatpicking: how can I make my floating-pick-hand less bouncy?
4
Guitar Picking improvement… is forcing EVER good
13
How can a guitarist treat and avoid lateral epicondylitis in the fretting arm?
3
Adjust left / right angle of guitar neck?
7
How to train for faster picking speed on guitar?
8
Does anyone have any advice for an older beginner electric guitar player who uses a wheelchair?
5
Is fingers pointing towards each other a problem when fretting a guitar