Is the diminished chord not as relevant as the other diatonic chords?

If we look at the circle of fifths and pick a key (either major or minor) then its neighboring notes are its diatonic chords.

For example, in E major the diatonic chords are: E major, f# minor, g# minor, A major, B major, c# minor. If you notice the circle doesn't mention the d# diminished (vii) chord. Or atleast, the d# is not an immediate neighbor.

Given the significance of the circle does that mean that the diminished chord is not as relevant as the other diatonic chords, and consequently is it usually used less often? 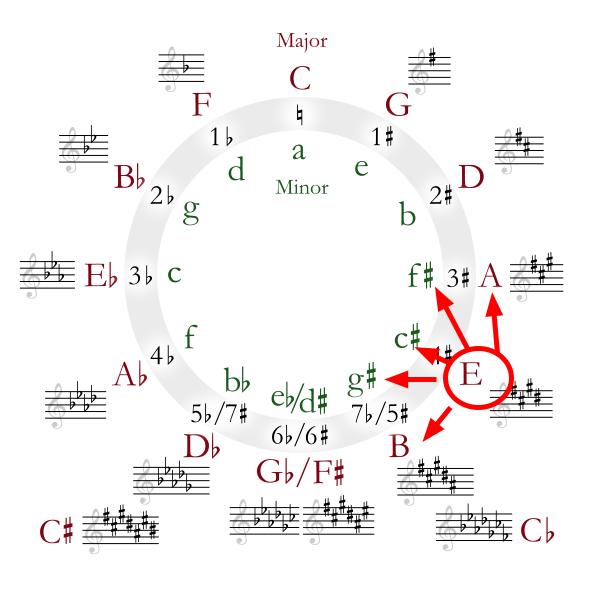 Diminished triads are used less often, but not for any reason involving the circle of fifths.

Diminished triads are dissonant; they are built with a boundary interval of a diminished fifth. Tonal music in the Western Classical tradition is built on the polarity of tonic and dominant, which is a perfect fifth relationship. As such, we do not have diminished keys in tonal music because there is no perfect fifth above tonic. This is why they don't appear on the circle of fifths: because the keys simply don't exist in tonal music.

Diminished triads are used in tonal music, but only in subsidiary (i.e., non-tonic) roles. The tritone (=diminished fifth) of the diminished triad is what creates most of the tension in tonal music. If diminished triads were elevated to the status of tonic, we would not be able to have the clear tension and release emblematic of harmonic progression in this style, because our point of stability would itself be unstable.

In some post-tonal music, diminished sonorities can function as tonic; often this is done by making the diminished triad the most stable sonority present. But since your question begins with the circle of fifths, you're presumably discussing only tonal music.

If we look at the circle of fifths and we pick a key (either major or minor) then its neighboring notes are its diatonic chords.

I think that's more an interesting coincidence, rather than anything that the circle of fifths diagram in your question is fundamentally 'trying' to show.

If you did want to see a circle of fifths that does show all chords diatonic to each key, including diminished, how about one laid out like this (by Stephen Weigel): 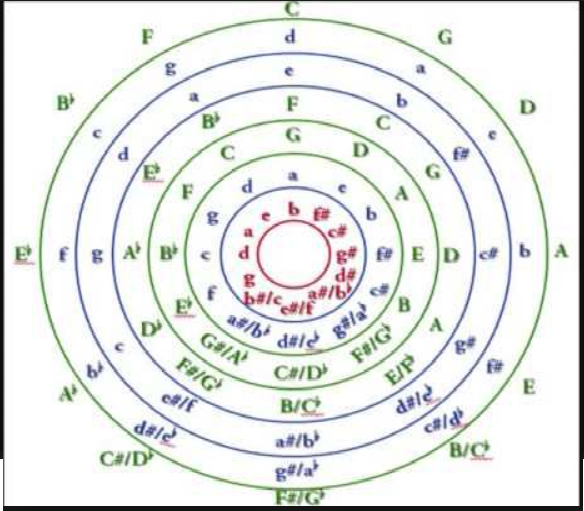 Rather than just having two rings (as yours does) showing roots of major and minor keys (or Ionian and Aeolian modes), this has one has 7, representing each of the 7 modes of the diatonic scale. Each radius of the circle therefore shows you a set of chords diatonic to a single key signature.

Given the significance of the circle does that mean that the diminished chord is not as relevant, and consequently is it usually used less often?

As we've seen above, there's no reason at all that we can't show diminished chords on a circle of fifths; it's simply that the typical circle of fifths shows only shows the two 'modes' that correspond to the major and minor keys (and we get the lucky coincidence of showing most of the diatonic chords in close proximity, as you pointed out on your diagram, because the roots of the major and minor keys are a third apart, the circle goes round in fifths, and combinations of these two intervals happen to take us to the roots of 6 of the diatonic chords of a key - leftaroundabout's answer explores this aspect more).

However, we can also see that in each set of diatonic chords, there's only one diminished chord, but three each of the major and minor chords. This is a characteristic of the diatonic scale. There are a number of 'good things' about the diatonic scale, and one of them is the way it facilitates consonant triadic harmony, generating lots of pleasing majors and minors (and only one diminished chord). And it has been done this way partly because the major and minor chords are a lot more consonant, while the diminished is relatively dissonant.

As to whether the diminished is relevant - that rather depends on the style of music you're talking about. It is (with its friend the half-diminished seventh) a dissonance that is often used as a passing chord generated by stepwise voice-leading, or a 'weak' version of the dominant seventh, in styles from classical, through jazz, to rock and pop - but a lot of genres avoid it as well; it's rare in rock music, for example, as it sounds especially dissonant when played through distortion, and it's also rare (for obvious reasons) in genres that don't characteristically emphasize an unflatted leading note.

Excellent question. To answer, let me first point out that this circle of fifths you have there is (quite evidently) really two circles of fifths. A single circle is just, well, a sequence of keys a fifth apart.

Wait a moment, sequence? Truth is, this circular layout is just an artifact of modern tuning, namely of 12-edo. In other tunings, you don't get the G♭≡F♯ equivalency, and thus end up with no circle but an “infinite” line (or a much bigger circle).

By adding the relative minors, you're introducing another interval: the relative minor is always a minor third below the major. There's a good reason for this: this relationship is most naturally derived in 5-limit just intonation, with the following frequency ratios: (I'm now talking about single notes, no keys or chords)

In case the following graphics don't show up properly in your browser, here's a screenshot.

And that's essentially the same way that diatonic scales are also constructed. Observe that we can skew the above:

And then calculate cross-links, which actually turn out to have the even simpler frequency ratio of a major third:

This is a strip of the Tonnetz, which is a very nice tool for constructing scales. A major triad is always a down-pointing triangle, and a (Ptolemaic) diatonic scale consist of three neighbouring such triangles:

The Tonnetz also has the minor chords, as upwards-pointing triangles

but to get diminished or augmented triads you'd need to add more rows to the diagram:

The diminished triad contains the tritone, and is therefore a possible substitute for the 'dominant 7th' that contains that same tritone. It can take the place of any chord in the 'circle of 5ths' e.g. Bb, F, C can be substituted with Bb, Bdim, C. And often is.

Anyway, the circle of 5ths isn't THAT important.

The circle of fifths only contains majors and minors, the version here showing the relatives with maj. and min. together. Each key has I IV and V, and ii, iii and vi. You'll notice that in E, for example, the ii, iii and vi are a sort of 1, 4, 5 in their own right- as C#, F# and G#. they all fit nicely into a pattern.

The diminished chord is made up differently to start with. It could be construed that a major has a major and a minor third, while a minor has a minor and a major third, whereas a diminished has two minor thirds. I understand that the triad is actually a third and a fifth!

So there's no reason why that viio chord should be the next neighbour in the circle - its makeup is different, and it's not major or minor anyway. Although not as prevalent as the ubiquitous major and minor triads, the diminished and its close relative the half-diminished (aka m7b5) does feature quite a lot, just maybe not in the music you play or listen to.

In tonal music (e.g. of the common practice period, or the vast majority of popular music), you will rarely hear a key that has a diminished tonic triad. On the other hand, diminished chords in tonal music are quite common. They mostly arise as vii° in major or (harmonic or melodic) minor keys, or as ii° in minor keys.

The main way vii° comes about is as a dominant substitute. If every tonic were I (in root position) and every dominant V (in root position), the music would get boring quickly. Therefore, composers elongate phrases by moving through inverted chords like I⁶ and V⁶, as well as substitutes like vii°⁶ and its seventh-chord variants.

Another reason to use diminished chords is to highlight its dissonant quality. This can be used to colour sad or dark moments, or as a point of climax. Another typical place that attracts dissonance is right before a cadence, although usually V⁷ is used instead of its diminished cousin vii°⁷.

Of course you are right that because diminished chords are not as stable as major and minor triads, they play more of a background role. But this doesn't mean they are unimportant!¹

The development section of a lot of Bach works not only uses intensification of texture, expansion or contraction of range, etc, but also by harmonic intensification, which often prominently features diminished triads and seventh chords. Already the C major prelude from WTC book I has a diminished chord around its climax² (as well as in other places in the piece), but it's easier to find examples in bigger works as well (especially works in the minor mode).

An example of a more expressive use of diminished chords is the opening chorus of Gluck's Orfeo ed Euridice, which uses the highly expressive quality of scale degree 6 and its harmonisation as vii°⁷ to create a particularly dark and sad tone.

Another example is the 𝒇𝒇𝒇 descending cadenza in Rachmaninov's Prelude in C# minor; it features the chords vii°⁷ i and vii°⁷/iv iv, which again has a prominent role for diminished harmonies. This seems to be a fairly common device for the climax of a minor piece.

¹I would actually argue that the minor mode, especially in its melodic variant used in most classical music, gains its true sadness not from the minor triad, but from the highly emotive lowered 6th scale degree with its harmonisation as vii°⁷, cf. the Gluck example.

²In the original manuscript, it is followed by a harmony that is unusually ambiguous for the time. In new editions, somehow an extra measure is added, that dramatically weakens the harmonic climax.

Not as technical as the others, and sorry I'm ignoring your "circle of fifths" argument. My answer is: The diminished chord is a weird chord... it's a minor flat 5 with no note being the root because they're all a tone and a half apart. It has no identy so to speak... doesn't sound major, doesn't sound minor, doesn't have that obvious 7th. It's a really bizarre sounding chord. And if you were to look at the sine waves of each note (which I haven't) I would assume it would also look bizarre. (where a perfect fifth the sine waves would match up in a lovely way, I'd be curious to see how the sine waves look with a diminished chord). Anyway, weird answer, sorry. Just my thoughts.

I've given this some thought and it occurs to me that diminished chords are actually much more advanced than others and less understood by the lay musician and therefore not used musically as often. But they do have a distinct emotional impact whether used alone or in combination with other chords to convey a musical message, so I believe their value musically is as high as any other chord. That said, I admit I don't use them very often.