How do I correctly borrow chords from one key to another?

So how does one decide to borrow chords?

Let's say I am in the key of C Major. Can I borrow chords, say, from the G Major key?

How does this work?

The term "borrowed chords" relates to borrowing from the parallel major or minor. This is also called "mode mixture."

At its most basic, when we're in a given key, we can use chords from the parallel version of that key.

Let's test this in C major. In this key, we have:

In C minor, we have:

So if we're in C major and we write a I–IV–V–I cadence, we can instead "borrow" the iv chord from the parallel minor and write I–iv–V–I.

You might notice that we're borrowing both chord qualities and particular scale-degree alterations; they're one and the same. In other words, to create the above I–iv–V–I progression in C major, we're also borrowing the lowered sixth scale degree A♭. If we borrow III from the relative minor, we don't just make the E-minor chord major; we borrow E♭ and B♭ and make an E♭ major chord.

This brings us to a vitally important rule: when we borrow a particular scale degree, we tend to keep using it until the point of cadence. So if we wanted to add a ii chord after the iv chord above, we would need to borrow the A♭ again and make it a ii° chord: I–iv–ii°–V–I. Otherwise we would have a wonky A♭ to A♮ shift in the phrase. (Note: This statement pertains to the Classical tradition. Popular music, film scores, video-game music, etc. sometimes intentionally create that "wonky" sound!)

Other chromaticism, like applied chords, are typically not considered a form of borrowing. If you were to borrow a chord from G major like D major, we typically explain this with the notion of the secondary dominant (also occasionally called the applied dominant) or a straight up modulation. But in a typical music theory course—at least here in the US—the term "borrowed chord" applies exclusively to mode mixture.

Having said that, some theorists, including Matthew Brown in his book Explaining Tonality, call secondary chords "secondary mixture" and thus do relate it to the notion of borrowing.

What you suggest is not much. Think about the usual chords in C - C F G Am Dm Em, and those in G - G C D Em Am Bm. You've only realistically changed or borrowed two chords to D and Bm. The rest stay the same! So, actually, it's a pretty safe idea.

You might want to consider parallel chords - same root note, but chords from the minor instead of the major.

But I suspect here we go again, looking for rules. With this sort of thing, there are few. Mainly be guided by your ears. Almost any chord can and is made to fit in any key. I've played C>F#, in a song - can't remember which, sadly, and with the right melody, it works beautifully, even though F# is nothing to do with key C.

A borrowed chord is a chord "borrowed" from the parallel key. Borrowed chords are typically used as "color chords", providing harmonic variety through contrasting scale forms, which are major scales and the natural minor scales.

If you are in C major, you will need to use the chords in the parallel minor, which is C minor in this case.

We can use a borrowed chord to "substitute" the place where a diatonic chord is supposed to occur. For example, let's say we are writing a plagal cadence. The "diatonic" plagal cadence in major is IV - I. We can replace IV with iv, and we get iv - I.

The ♭VII is one of the most common borrowed chords in popular music. The leading-tone IAC is one of the cases here (although it does not really use the leading-tone). The cadence is written as ♭VII - I, derived from vii° - I, which is more common in classical music.

Let's look at the minor keys now. The diatonic chords of natural minor are i, ii°, III, iv, v, VI, and VII. In A minor, for example, we get:

In A minor, we notate the derived chords as:

The process is the same. Let's say we borrow V from the parallel major. In the chord progression of i - v - VI, we change it into:

Regardless, we can still call them borrowed. In a stricter view, they are both diatonic AND borrowed. The only "purely" borrowed chords in minor keys are I, ♯iii, and ♯vi. The I is used the most of the three, as a final chord in a final cadence. This is known as the Picardy 3rd. For example, if we write V - I in a minor key, we see a both diatonic and borrowed chord resolving to a "purely' borrowed chord. The ♯iii and ♯vi are also used in pieces. For example, the finale of Dvorak's 9th symphony contains a ♯iii, while Debussy's "Prelude" from his "Pour le Piano" contains a ♯vi.

I will add an attachment below in order to help you clearly remember: 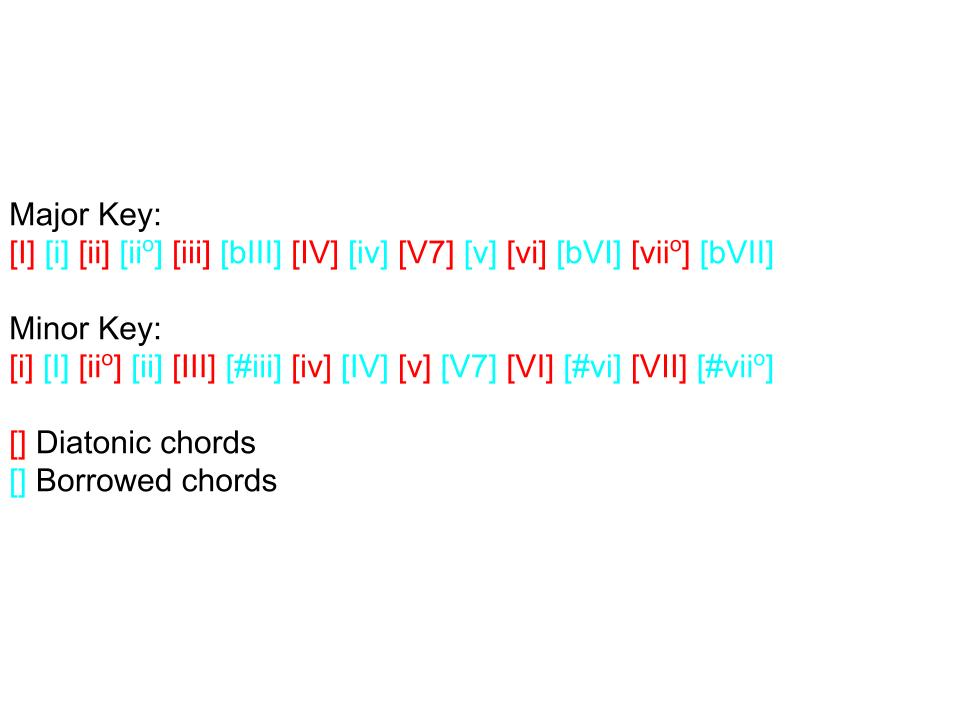 If you From the tonic key of C , and want to go to the tonic of G , look for the Common chord. (the chord that the two tonic have)

In This case,C major chord is

While G major chord is

Notice that both Tonic key has some common chord , Which is Em, Am, C, and G.

You then can use these chord as a Pivot chord .

Notice that Em, Am, is acting as a pivot before we hit D major ( which is not in the key of C major). Now you have changing the Tonic to G major.

While using this technique, you can change the tonic in the subtle way and not noticable.

We could extend the idea of 'borrowing' further than the parallel major or minor. For instance, it's a standard songwriter's trick to modulate up a minor third. Start in C, state the theme in that key, then repeat it in Eb. Chuck in a few Fm chords early on, they can prepare the way for a Fm7, Bb7, Eb modulation when the time comes. We could say we've 'borrowed' the Fm from Eb major.

But, beware. This justification is only useful if the song DOES modulate to Eb. It's very likely a song in C will use Fm chords just as colour. The 'borrowing' analysis would then be ridiculous.

41
Why do many songs in major keys use a bVII chord?
6
Chord exceptions in City of New Orleans
5
Analysis of borrowed chords in Lush's "Single Girl"
4
Why does a C Major chord work in the key of D Major

2
Can a piece in one key borrow from its relative minor? parallel minor?
3
Seventh chords and the key a song is written in
0
Combining chords from relative keys
2
How to work out the key of a song which has a few of the same chords of more than one key
1
How does a key influence pitch?
3
Does borrowing chords from a parallel mode change the key?
6
Determining the seventh chords of a key
1
Can I borrow chords from Harmonic minor?(Modal Interchange)
1
If chords progressions belong to more than one key, would tonality come from the melody?