On one of the songs I'm writing, I have a few notes played on the end of one measure, finishing in the second one. 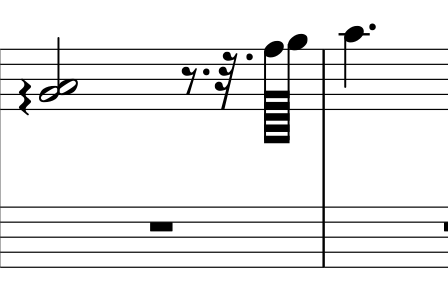 These three notes being played really fast, I don't want to use an arpeggiated chord symbol.

What can I use instead of this to make the sheet look less crappy?

I'd go with grace notes, they are not counted in the rhythm, so you don't need to fiddle with the unreadable rest durations. Also, they are supposed to be played very fast. I provide several options with different meanings. The middle one is mostly understood and meant to be played as arpeggios where the g in the second arpeggio is not kept. 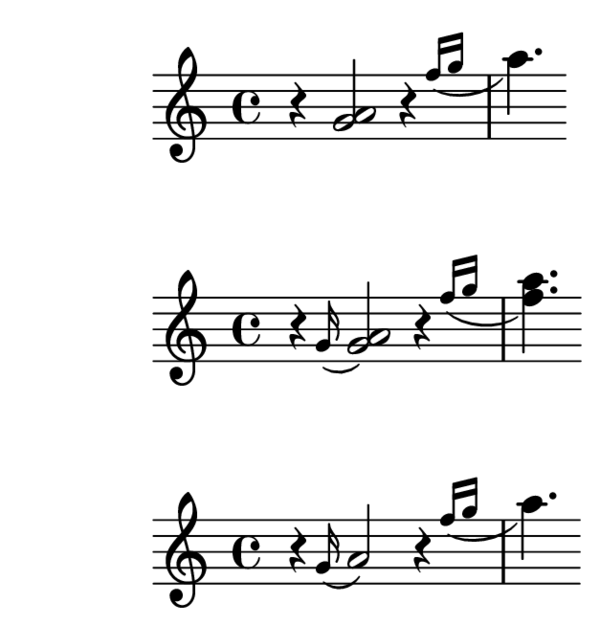 LilyPond code, just in case you used this software, is based on \afterGrace:

An appoggiatura may do it, except the notes involved need a bit of time to play - that's what it's about.

An acciaccatura is probably a better bet, though, as is theoretically timeless. It actually means 'crushing in'. The notes will look like miniature versions of the proper notes, but on the correct lines/spaces. They can be played just before the 1st beat, or just on it, depending, to a degree, on interpretation.

There is another far simpler way, though, consisting of a squiggly line signifying an arpeggio. It's not actually an arpeggio as we normally play one, as the notes don't constitute a chord, but it'll still get played starting with the lowest going up. Problem is, each note ought to be held until the last one (the melody note) is played. Since it's very quick, it may not matter too much. Although you say you don't want this.

So it'll depend on how fast you want them played, really. Appoggiatura or acciaccatura. Long words for such short notes...

The grace-note answer is the right answer to your question as you posed it, but your approach isn't as wrong as you think.

There are times when a composer explicitly does not want grace notes, but actually does something like what you have here. The composer may do this for a few reasons. Perhaps, the composer doesn't want to de-emphasize the structural importance of the notes (which grace notes do), or just wants to emphasize that the rhythms must be precise. In both of these cases, the grace notes will get explicitly written out.

This is also exactly the sort of situation where multiple dots are used (and warranted). We are at the end of a measure, and we are just filling in space for the last two 128th notes. So, rather than using a dotted 8th followed by a dotted 32nd, you would normally use a triple-dotted eighth rest.

Multiple dots are usually avoided because they are confusing, but when they are used just before the end of a measure with some very small notes, they actually trigger a mental shortcut for strong readers.

A multitude of dots redirect the attention of a competent reader away from the rest itself, and tells the reader to just calculate the duration of the final notes by subtracting the final notes from the time of the next downbeat instead of by counting forward from the previous downbeat. Sometimes, the first technique is easier, and having many dots is a way to let a professional level sight-reader quickly know that that is the best approach.

16
What are all these symbols in some old sheet music?
12
Is there piano notation for finger sustained notes (as opposed to pedal sustain)?
2
Are these dotted and tied rhythms equivalent?
6
Handling of dotted eighth rests when a "swing rule" is in place, and whether physical note position has effect on it
1
Using Pedal For Two Part Writing
7
Alternative or more advanced methods for counting rhythms
2
Indicating the expectation for improvised rhythmic ornamentation
0
Notation for bowed instrument to play chord from high to low
0
Making a lead sheet to practise transcription - have a few queries