The Song “Spanish Guitar”: How is this played on piano/keyboard?

This music has music symbols and info I'm unfamiliar with. But this what I've found searching on the internet:

What help I need

Now all I know is theoretically how it should be played. But I don't know how exactly those arpeggiated chords and tremolo notes should sound. I'm trying to learn to play this on my own - without a teacher. I'd really appreciate it if I could here an (audio) recording of parts or even the whole song.

Welcome. It looks like you’ve done some research on this beforehand, which is good. The relevant sections of the PDF you provided are here in two images:

Start by pressing the very bottom note and play each note above it, one at a time, without releasing any of the notes until you reach the highest note. Since this music is vivace, it will be done very quickly. It takes coordination, surely, but it’s an indispensable technique for pianists and well worth taking the time to practice.

(Interestingly, for guitarists, it’s a technique that comes about quite naturally as a function of the instrument itself: the regular strumming of the guitar is essentially an arpeggio. That gives you at least a clue into the interpretation and intended sound for this piano piece.)

Now, a bit of explanation. Something that makes good logical sense for playing a chord with no ornamentation would follow thus:

“If the piece directs me to play at 60 beats per minute, and the quarter note is counted as 1 beat, and this chord is made up of four quarter notes, then I will play all the notes at once for exactly 1 second—no more, no less.”

Easy enough, right? Now, what happens when you have to play the notes not all at once but one at a time? We are faced with a dilemma:

That might sound confusing at first, but let’s break it down. My understanding of this technique is the following: the last note of the arpeggio should generally be the note that sounds on the beat. For instance, if an arpeggiated chord occurs on beat 1, you will want to start the first note of the arpeggio slightly before beat 1. Sometimes, however, you might perform the arpeggio in with a slightly different timing, depending on the context or your desired sound or effect. Here’s an example:

On the left is the image of the chord that is arpeggiated. The four examples to the right of it demonstrate in a somewhat literal or verbose fashion how you can perform it. The red line is the measure line. The green box represents the most usual choice; the purple represents another choice that I believe probably to be less common but still useful; and the orange represent inadvisable choices. Sometimes, these depend on context.

What should become clear here is that the time (rhythm) you spend on the arpeggiation of necessity takes time (rhythm) away from somewhere. In the green box, it takes time away from whatever music came before the chord; in the purple box, it takes time away from the chord itself (basically, subtract however much time you took on arpeggiating the chord from the rhythm of the chord—in other words, if it takes you the length of time of a sixteenth note to arpeggiate a quarter-note chord, and you start the arpeggiation on the beat, then the chord effectively is only as long as a dotted-eighth). The orange is kind of just a mess somewhere in the middle.

After even just a bit of practice on this technique, you will certainly not be analyzing to this depth. It is good to keep in mind, though. For this piece, I would recommend the use of the “green” box. 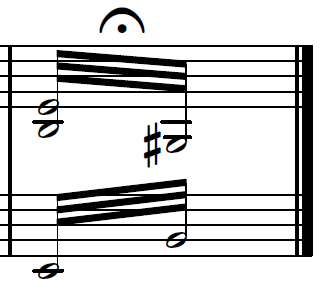 The tremolo can have a few interpretations depending on which instruments you’re performing—for instance, on strings it can be interpreted in certain contexts as something like “not specifically counted; very, very fast; as rapidly as possible”—but for our purposes, on piano, it is usually counted evenly, although this example provides something of a bit of detective work.

A tremolo between two notes is performed by alternating them. Here’s a graphic I so expertly drew to illustrate this technique:

Very professional. Now, with even just that information, you should have no trouble performing the tremolo. It is made up of the notes written and with the rhythmic pattern of 32nd notes. The “detective work” part of this is the added fermata. If there were a fermata here with no tremolo, the meaning of the fermata is simply to hold the chord for longer than written (how much longer is up to you, though a “reasonable” length is preferable). My guess for a piece like this is that the tremolo is something like a “flourish” at the end of the piece, and so you would not simply perform the tremolo for only the length of a half note, but for… well, as long as your arms can last, maybe?

Let me know if any of this could be clearer or if those audio links are still working.

I could not find any video recordings of this piece online, so I'll try to interpret it as best as I can.

The piece, as you have said, has a very quick and lively tempo. This combined with the staccato markings create a light tone, so you shouldn't be pedaling. The arpeggiated chords in the beginning of the pieces should be played with fast fingers.

In the middle of the piece when there are right and left hand alternating notes, I find it easier to play them with your right hand over your left hand. Make sure to keep your right wrist relatively high so that both hands can play their notes easily. This will also allow you to easily accelerate(più lento e poco a poco accelerando).

The last two lines of the piece are the finale. I would suggest starting this section at medium loud, and then crescendo with accelerando. For the last tremolo, be sure to lift your fingers and articulate the notes.

Overall, keep a light tone. You are free to interpret the dynamics in any way that sounds right to you, since there aren't any dynamic markings in the sheet music.

Not the answer you're looking for? Browse other questions tagged piano technique sheet-music arpeggios tremolo or ask your own question.