Would my 12 string guitar break if i added pairs of strings instead of octaves and removed the last low-E string?

I've heard of lots of famous musicians doing this, for example Ariel Camacho. And their guitars never break. I'm wondering if I added pairs of strings and removed the last low-E string, would it break?

guitar acoustic-guitar maintenance 12-string-guitar
share|improve this question
edited May 15 '18 at 2:29

All strings on a guitar are at approximately the same tension, +/- 15% ish. The fact that you put, say, an extra ordinary A string in place of the octave A won't make much difference, as the octave string is much smaller gauge but is also tuned up an octave, so will end up with about the same tension as its partner. Look up 'string tension' and you'll find exact figures for given open string gauges tuned to standard.

There isn't much point in leaving off the last bottom E, in fact, that may cause imbalance in the neck, due to everything else being pretty well the same tension as original, but less so on the topside of the neck.

A potential problem may be the nut slots. A bonus may be the intonation is more accurate!

That apart, you say loads of folk have done it, so the only other criterion is will your guitar take it. That, we cannot vouch for here.

Tim is correct about the tension. As long as you tune each pair of strings in unison vs octaves, you will not alter the overall tension significantly by using pairs of strings that are each the same gauge.

My concern would be the string spacing and the nut slot. A standard 12 string guitar will have the nut slot cut for a pair of strings of different diameter (to be tuned an octave apart) for all but the two highest strings (pair of high e strings and pair of b strings which are to be tuned in unison vs octaves).

So for the pair in the Low E position the nut would have one slot sized for a standard low E string paired with a narrower nut slot for the lower diameter octave E string that would be part of a standard 12 string set. 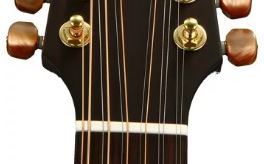 Pictured is a standard 12 string guitar at the nut.

Two issues will likely arise if you tried to put two standard low E strings on a 12 string guitar with a standard 12 string nut. First, the nut slot meant for the octave string would be too narrow for the standard low e string.

Certainly you could file the nut slot and make it wider. But here is the second problem that I believe you might encounter. The larger diameter wound strings such as the Low E, have a wider oscillation pattern than the smaller diameter strings (the arc of the vibration). That is the reason the bridge on a guitar is higher on the bass side. The bass strings must sit higher off the fretboard than the treble strings to accommodate the greater amount of string oscillation or you would encounter fret buzz.

So if you put two low E strings too close to one another, I would expect that they would hit each other when strummed or plucked at the same time. If you put them too far apart, you will need really fat fingertips to press them both down at the same time if you were playing for example, a standard open G chord formation fretting both the Low E pair and the A pair.

That might be why you were thinking of using only one low E string. But you might have a similar issue with the next pair of bass strings (the A position).

It's possible that you might need to have a qualified guitar tech or luthier make you a custom nut slot to provide for both the width of the slots for your unison bass strings and adjust the spacing on the pairs of unison bass strings to find the point where they don't buzz against one another but are still close enough together to fret them both with one fingertip.

That said, you would want to be sure to start with a guitar that had at least a 1 7/8" wide nut so you would have room for a slightly wider string spacing. Some 12 string guitars have a narrower 1 3/4" nut.

FWIW Ariel Camacho reportedly used a Takamine P3DC 12 string (part of Takamines "Pro Series"). But any 12 string with a 1 7/8" nut should be adaptable to your desire to use two pairs of standard strings instead of a standard 12 string set.

I would recommend using the lightest gauge standard strings you can find to minimize the occurrence of the unison bass strings buzzing against each other and reduce the spacing that might be necessary to avoid it.

Not the answer you're looking for? Browse other questions tagged guitar acoustic-guitar maintenance 12-string-guitar or ask your own question.

7
12-string acoustic guitar - how do nut and saddle materials affect tone?
10
Restringing a 12-string guitar with heavier strings - is it possible?
3
What is the minimum break angle for strings on a guitar?
11
Why is the last string on a guitar called the first string and the first string called the sixth string?
4
Performance: Better low end of eight string guitar
1
Would a tiny pulse of electricity sent through electric guitar strings affect the pickups enough to be heard?
10
Should you change the strings on a brand new guitar?
6
My guitar strings go loose when I tighten them?