Passage has successive F minor and E minor chords. Is this atonal or chromatic?

I am studying this passage from LOTR. 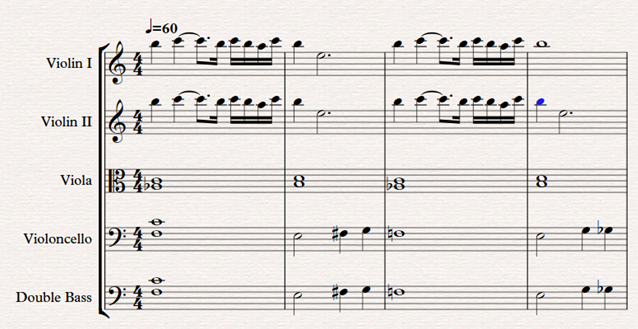 The viola, cello, and bass here alternate between chords in F minor and E minor.

How would I write the lower 3 parts with Roman numerals? They don't share notes, so I'm confused how I would interpret this. This isn't atonal is it?

When you get confused by the notes, stop looking. Listen. If you forget the chords and listen and understand how the harmonic tension is working, I think you'll agree the passage overall doesn't feel like it comes to a conclusion, like a full cadence. But there is a sense of tension and then relaxation. To me it sounds like a half cadence with an unusual flavor of Phrygian motion. There is a long tradition of monkeying around with the inner notes in Phrygian cadences, the most notable version being the French, Italian, and German augmented 6th chords, all of which serve the same (pre-dominant) function.

With these thoughts on the functions of the chords, let's look at the notes. If this is a Phrygian sort of motion, then the passage is in the key of A minor, with F chord acting as a chromaticized VI and the E chord being a v. To confirm this, I sat down at a piano and played the passage and inserted an A minor chord at the end, to see if it "sounds right." I think it does.

The F chord is a little odd because it contains an Ab, making the chord minor. You'd think this would make it sound pretty weird, and it does have a spooky sound to it, but it still works because Ab is enharmonic with G#, and G# is in the scale for A minor (harmonic or melodic). So adding the Ab does not take it out of key.

Also, the E chord is unusual in that it is dominant function but minor. This is what gives the passage a sort of sad and uncertain release.

And finally, there is a false relation between the A natural in the melody and the A flat in the harmony, which heightens the tension and mystery of the first chord.

If I had to write this in Roman numeral notation, it'd be either

P.S. I love this passage; it's one of my favorite leitmotifs in the film. Reminds me a little of the overture to Tristan and Isolde, and is even in the same key, coincidentally.

P.P.S. Maybe you noticed but this arrangement contains parallel fifths. Rules are meant to be broken, yo.

Not to detract from the excellent answer from @John_Wu, but i would posit this additional analysis.

First, to answer the substantive question, the passage is tonal. Next, to answer your secondary question: i'm not going to propose any functional harmonic analysis.

To my ear there is a clear harmonic tendency to the Emin7 chord. Also, to my admittedly eccentric ear, the top C in bars 1 & 3 have a very strong tendency to resolve to the B in bars 2 & 4. So far, we are in agreement, however i would posit that we're actually in an E modal space rather than A. Rather than ♭vi → v7, consider the Fmin a chromatic upper neighbour to the Emin7. Further, consider the parallel 5ths between melody & bass: this weakens the harmonic motion, leaving my ear with the impression that the Fmin chord is an embellishment over an aurally implied E. [added:] Now in that light, the melody itself moves to emphasise the E centre with, again to my ear, C sounding dissonant against the preceding B rather than consonant in the Fmin embellishing harmony in the lower voices. As has been pointed out in other posts & comments, the melody eschews Fmin — viz the A♭/A♮ cross relation. On its own the melody implies to me Emin.

Does this line of reasoning then imply the following?

Equally this analysis of the chromatic upper neighbour would apply with the ♭vi → v7 movement over the implied v, but as a said earlier i hear the modal centre as E rather than A.

Also, John Wu's comparison with Tristan & Isolde is apposite, especially in light of Shore's later work for the LoTR films.

The piece can be described using chord names. It's tonal.

It may not be functional, in the sense that everything's in the same scale and can be described as a string of (completed or frustrated) perfect cadences. But it doesn't have to be. Lots of (tonal) music isn't.

Not the answer you're looking for? Browse other questions tagged roman-numerals or ask your own question.

7
Roman Analysis of "Ab B G" chord
15
Roman numeral notation for a suspended chord?
8
How do I determine the chord progression Roman numerals?
4
What roman numeral should be used to identify a note that is not in key?
1
Eight numerals vs. twelve half-steps
2
Using Roman Numeral Notation with Notes in the Bass (not figured bass)
4
Minor Key (and other key?) Roman Numeral Analysis
5
Roman Numeral Analysis - Tonicization of relative major key in minor key
5
Chords as Roman Numerals: how to represent in-between chords?
1
Understanding function of some non-diatonic chords in Jack Johnson's "Belle"