How to play this passage precisely? 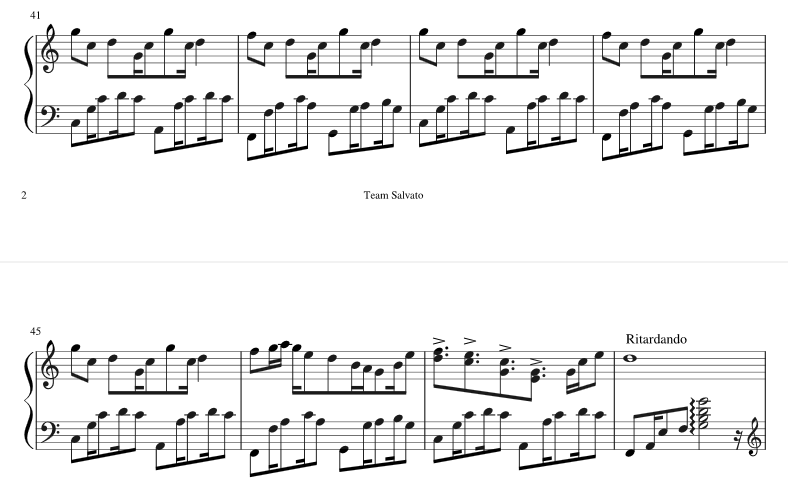 I have got trouble playing this passage with both hands. I can play the hands separately, but can't join them together. I have tried really slowing it down, but the rhythm is too complicated for me to play it slowly and precisely. Any tips?

PS: I found the sheet music here: https://musescore.com/imicus/your-reality If anyone is interested.

Where did you find this? It is notated extremely poorly and the division of the beats is not intuitive by looking at it. I am not surprised you are having trouble with it. I would, too, and I am an excellent sight reader. When I have difficulty seeing the rhythm between hands (which only happens when I am reading very slow Bach pieces written with loads of 32nd and 64th notes...) I draw lines to show where the beats are located. I also will write out the counting numbers where appropriate.

In the piece above, I would write out "1e+a2e+a3e+a4e+a" across each measure, making sure that all the note values are accounted for and placed correctly. Then count slowly while trying to play hands together. I hope this helps. That notation is a mess.

The better thing would be to rewrite it with ties in the proper places so that the measure can be visually divided into four beats, but you may not have permission or the desire to do that.

Bars 1 through 5 are identical rhythmically. I suggest just playing the 1st (or 3rd) bar over and over until you get it. then move to bar 2 (or 4). This will remove one thing to think about making it just a little bit easier.

Secondly, forget tempo for a minute and just play the notes one 16th beat at a time as slowly as needed, even if it is not constant. really break it down. so the downbeat has both hands playing together. play those two notes. the next 16th is just holding the downbeat. move to the "and" of beat 1 and again both hands play together. play those two notes. NOW things get interesting where the left hand plays a note on the next 16th but the right doesn't. then the right hand by itself. And so on.

breaking it down like this without worrying about the tempo will help you get a sense of when to play each hand. loop the bar through as many times as you need to until it starts to feel like you can play it at a tempo...a very slow tempo, 40 beats per minute if needed. if you can't play it super slow, you will never be able to play it fast. Use a metronome to keep you honest. put it on eights or even sixteens at a really slow tempo if you need to and then back to quarters as you speed it up.

lastly, i am not sure if it is a musical style issue but i feel that this is written very strangely. and it seems to violate the "imaginary bar line" which makes it really hard to read, at least for me. maybe consider re-writing it.

Here is some info about the imaginary bar line if you are not familiar:

EDIT (since i though of something else): Have you heard this piece yet or are you just trying to read it? IF you have never heard it and can't site read it well enough to play it you don't know how it should sound. I recommend getting a recording of it if one exists, or, if you have the ability, enter it in to a midi sequencer. this will allow you to hear it so you can understand what it should sound like. The bonus of doing it in midi is you can slow it down and hear it even better (i guess this can also be done to a recording with some software without changing the pitch as well). a 3rd option is to have a friend that can play it play it for you.

Your "the rhythm is too complicated for me to play slowly and precisely" reminds me of an amusing story.

Once, when I was six years old, I turned on the hot water in the bathroom. It wouldn't get hot (I waited and waited, of course) so I left it running, went downstairs, and asked my father to fix it. He said "Let it run a little longer." Well, I had tried that, and I told him so. And he said "Let it run a little longer." I tried to explain to him a few more times, and he just kept repeating himself and grinning at me. Finally I got annoyed, stomped back off to the bathroom, and of course found that the water was hot. Which annoyed me even more, of course. The life of a six-year-old prima donna isn't an easy one.

So, my first tip is to keep at it. You have to be patient, and you have to persevere. At some point the rhythm won't be too complicated for you to play quickly and precisely.

Next tip. Sometimes, you have to start by stepping back and analyzing where the notes hit in relation to one another. Here's a difficult rhythmical problem that I had in college, from Debussy's L'Isle Joyeuse:

Eventually I could just play it, without that 15-beat subdivision running through my head. Then I did similar work on the other polyrhythms, and eventually had the whole passage down. (Too bad I didn't put as much work into the rest of the piece.)

The same will happen for you, but you have to analyze how everything fits together.

One more tip. Go to the link, click on the first bar of the difficult area and play it back at 50% (see the metronome icon on the toolbar). Listen to it over and over again until it gets baked into your head. Then see if you can play what you hear.

That way, you're putting another part of your brain to work on the problem, sort of a left-brain-right-brain approach. If you work at it from both directions, you should make quicker progress.

But the most essential thing is to keep at it.

The notation looks a mess, but really this is quite simple. To play it "slowly and precisely", just count 16th-notes.

Just to scare you, this is what "really complicated" cross rhythms look like (from Sorabji, Organ Symphony No 3) - beats simultaneously divided into groups of 3,4,5, then 4,5,6, then 5,7,8. Note, this is for a solo performer - though of course the organist has to synchronise both hands and feet, playing three independent rhythms at the same time.

My tip is to try and break it down mentally. A problem that I have quite often with notes like these is I think of them as only being played in a set, instead of as individual notes. Honestly, once you picture them being written as individual eighth and sixteenth notes, I think you'll find it a great deal easier. And practicing your hands separately for a while longer wouldn't hurt either :)

Not the answer you're looking for? Browse other questions tagged piano technique polyrhythm or ask your own question.

6
How do I play the intro riff from Collective Soul's song Heavy?
4
My left hand doesn't keep the tempo
6
How to play rapid 32nd notes
8
Learn music with odd rhythms
1
Rage Over A Lost Penny: Getting better at left hand section
1
Polyrhythmic clash, how to get rid of the rhythmic dissonance without losing the polyrhythm?
3
How to practice this kind of complex tuplet structures appeared in Scriabin's Poem Op.32 and his Etude Op.42 No.2?
2
How to synchronize fingers/notes in piano chords
26
How to unlearn incorrect muscle memory