Lilypond spacing between lyrics and next system

I’m trying to improve the legibility of my scores by increasing the basic-distance between systems. There needs to be some whitespace between the last verse and the next system below.

Here's what I’ve tried so far

=> does not work between systems, but only staves in the same system.

=> increases the basic distance between the staves that are facing each other across systems, but does not include the lyrics between them. I would thus have to increase the distance depending on the number of verses.

I am also not sure, where to put the lines. Mostly I’ve placed them in a \paper block at the top of the file

this did not yield any noticeably different results from the above examples. 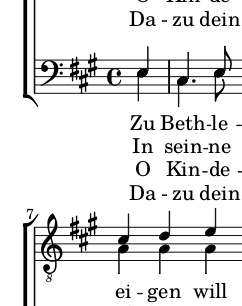 Any pointers would be welcome, all this seems like an oversight to me but I am starting to get the feeling that nobody has thought about this so far. I'd be happy to help filing an issue with the dev team, should it come to that.

edit: Using padding instead of basic-distance solved the problem.

If something like what you have posted is not working, it may be because your instructions are attempting to reference a part of your score that you haven't spelled out (that is, while you may be attempting to put space between systems, with lyrics below them, maybe your score isn't structured that way). 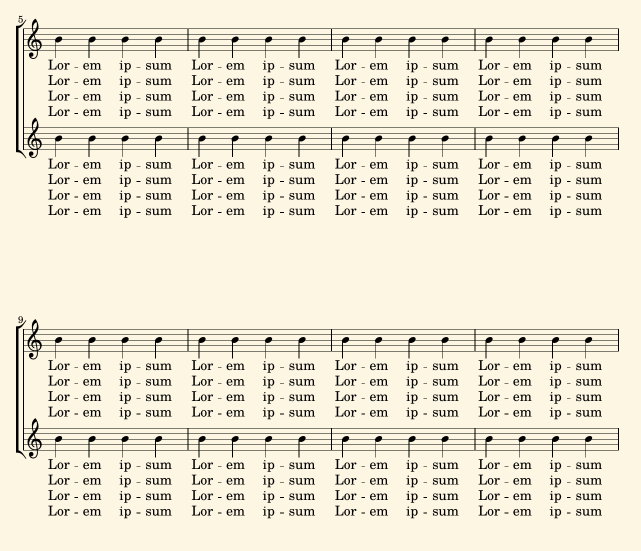 Is this what you are trying to achieve?

Just for completeness, here are all the parameters for that function, with their default values:

Not the answer you're looking for? Browse other questions tagged sheet-music lilypond or ask your own question.

5
LilyPond vertical spacing, alternate endings, and chords
3
Lilypond templating or content management system?
7
Lyrics for additional verses in LilyPond?
3
How to align chords, melody and lyrics in LilyPond?
4
Lilypond: Undesireable extra horizontal space with chords and lyrics
4
How can I increase the spacing between a fermata and the note in Lilypond?
4
lilypond: Odd horizontal spacing with two voices
2
Roman numeral analysis spacing in Lilypond
5
lilypond-book lyrics vs staff vertical spacing
10
How to increase LilyPond horizontal spacing?