Can anyone help with the use of a "Non Chord tone" in Arctic Monkeys' "R U Mine?"

I've recently had a go at analysing Arctic Monkeys' song R U Mine and was wondering about this part shown here: 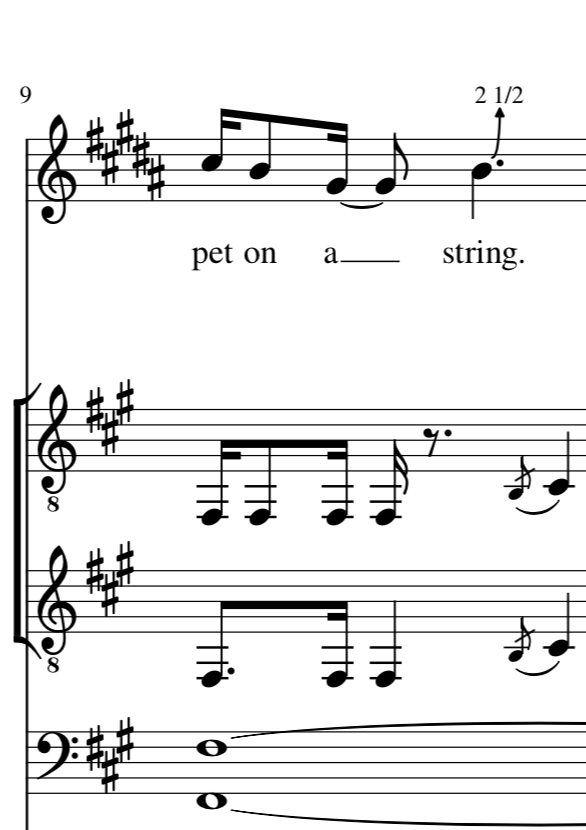 The key of the song is F# minor and and the measure shown starts with a non-chord tone. this is because the chord used is a B minor in second inversion and the C# in the melody is a a neighbouring tone. it was prepared by a B and resolves to a B.

What I'm having trouble with is that the B chord continues and the melody Leaps down to a G# and then leaps back up/resolves to a B. I don't know of any non-chord tone that is prepared and resolved using leaps.

So I was wondering if it still a non-chord tone and if so what kind, or is this perhaps a different chord?

So as Bob Broadley points out in the comments, the top part is written for a Bb transposing instrument (maybe tenor sax?), which means it actually sounds a whole step lower than written. So the melody in that bar starts on B, goes down to A then F#, then ends on a bend from A up to C#.

All the notes in the accompaniment are just F#'s.

From a quick listen to the song, that looks approximately correct.

The F#'s don't give us much information about the harmony, but I would have called it just a plain F# minor. Then the ending is just bending from the minor third to the fifth of that chord.

If you want to do a pitch analysis of this piece, you need to make sure you know what the actual sounding pitches of all parts are. As you are using a score with a transposing instrument on the vocal line (Tenor Sax), these pitches sound differently to how they look on the score. So, before starting an analysis, it would be easiest to transpose all of the melody line pitches down two semitones. (If you want to save yourself a lot of hassle, you could just write the sounding pitches in next to the notes on the score using their letter names, instead of rewriting the actual music.)

Not the answer you're looking for? Browse other questions tagged theory notation chord-progressions intervals nonchord-tones or ask your own question.

6
Songs that resolve late
4
Chord Progressions Including Majors That Should Be Minors
0
Need help understanding how this progression fits in with music theory
3
Would this note from Consolation No. 3 be considered a nonchord tone?
5
Love Shack Chorus Chord Progression
1
I chord interpretation and broken chord interpretation blocking broken chords
5
Help me understand the chord progression in Tatsuro Yamashita's 'Sparkle'
2
What kind of non-chord tone dissonance is this?
1
Can a suspension resolve by leap downwards?