Using a looper with the 4-cable-method (4CM)

Short explanation of the 4-Cable-Method:

Why no fun? Likely because the 4cm puts effects in front of the amp and also between the pre-amp and final power amp stage. If you wanted the ENGL output to go to the RC-300, then you would need another amp output to send a signal from the ENGL power amp.

If the ENGL Fireball II amp had a line-out, such as an emulated headphone jack, then you could send that signal to the RC-300 and loop away. However, you could have more fun by instead by sending the line out from the Boss GT-100 to the auxilliary input of the RC-300 looper and then send the looper's line out (headphone output) to a separate line-level audio, such as the Roland KC60 or a PA or a hi-fi system etc. This way, you can record separate loops using different effects and/or channels on the ENGL each time and the looped playback won't be coloured by the sound of the amp. See picture.

FYI - I struggled with this issue using the Blackstar TVP 260, Boss GT8, Digitech JamMan Stereo and Roland KC60 but the set up just described works well. (The old GT8 still has excellent modulation and compression effects and can do midi channel switching for the TVP 260 across 128 banks). 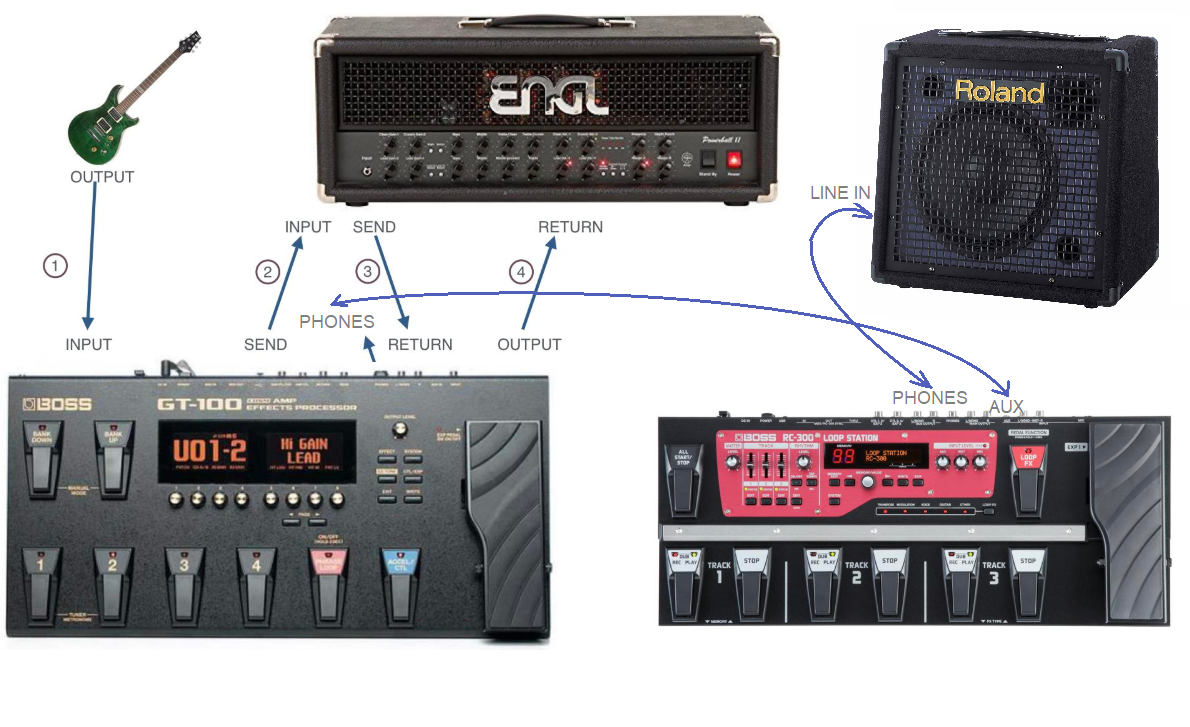 Not the answer you're looking for? Browse other questions tagged effects-pedal looping or ask your own question.

4
Pedals, pedalboards and velcro
1
Guitar amp FX loop noise
3
Live Loop Setup with Keyboard, Guitar and Mic with Boss RC-300
1
Connecting a Looper to a Guitar Multieffects Pedal
1
Can a multi-effects pedal produce the same tone as dedicated pedals?
1
Matching of the impedance for the effect pedals
3
Loop pedal volume in effects loop not controlled by amp volume controls
2
Modeling amp with FX Loop
6
Difference Between Active and Passive Volume Pedals?
2
where to place distortion pedal in signal chain for electric guitar and amplifier