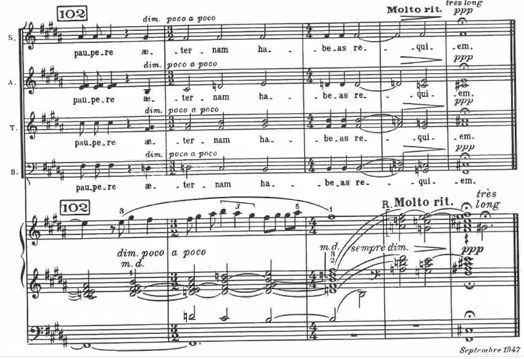 I've been singing this piece with my choir this fall, and the final cadence is so intriguing to me. I do think it's a very unusual cadence, and I would actually analyze it differently from some of the posts above.

My analysis rests on the fact that I hear the entire movement in F# major. I know the key signature says B major, but I absolutely don't hear it that way. There are lots of E-sharps thrown in right from the beginning, so I think Duruflé is establishing an F# major key center.

This would mean that at the end of the movement, we actually do resolve to the tonic by way of the flat VII, flat VI, and flat V chords of F# major (with the sopranos holding the F# suspended over them all). This is why it sounds so unusual--rarely does a composer use the lowered V, VI, and VII chords all in one cadence.

This analysis explains why the cadence sounds so unexpected. I don't think it's a typical imperfect cadence, or even a Neapolitan followed by a dominant. I think, by using these chords on the lowered tones, Duruflé is evoking a feeling of being lowered gently down into our final resting place. I get chills every time I sing it!

8
Feasibility of practising music for a person who are almost tone deaf?
0
Does this chord function as a 13 chord?
11
How would this chord from "Rocket Man" be analyzed?
3
Are these upper voices in this final passage from Handel a bona fide F7 chord or some kind of non-chord tones?
4
Can an Augmented triad be called a Quartal chord?
1
I-IV9b7-bVII-bIII-bVI-bII-I: what is this final-cadence called?
3
How can this chord from Rhapsody on a Theme of Paganini be analyzed?
4
What is it called when the melody note is held, but the chord changes to resolve to the final harmony?
6
Naming a chord in the first movement of Mozart's K. 331?