What does °7 and x6 mean in the context of intervals?

Does anyone know what the symbol °7 and x6 mean. I'm practicing intervals for my guitar exam but I don't remember ever being taught these symbols. Does it look like I am doing this question right? 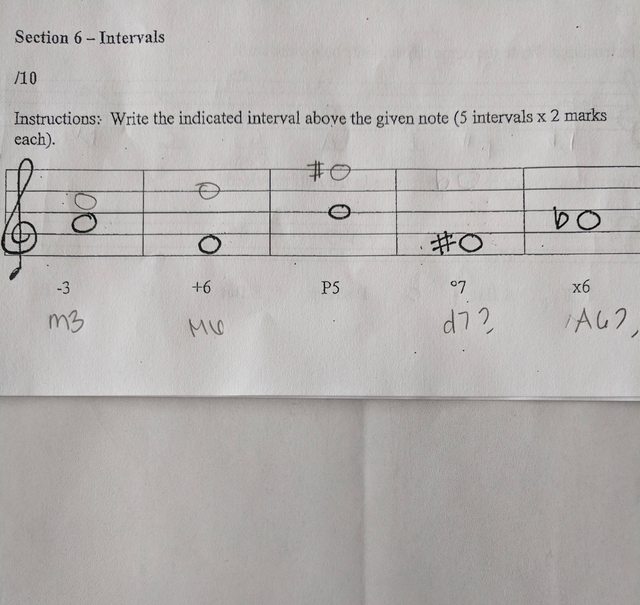 o7 is most likely intended to denote a "diminished seventh". That symbol is normally used to denote a diminished chord, not an interval. (So in that case the erased E flat would be correct :)

The symbol x6 is not common and I've never seen anything like it. The one who wrote it should have defined it somewhere (or, even better, should have used standard symbols, see below). But since + and - seem to denote major/minor, and o (most likely) denotes "diminished", I suppose that x is supposed to mean "augmented". However, it's by no means a standard symbol. The fact that the given note has a flat is an indication that our guess might be correct because then you can write the augmented sixth without any double sharps (a single sharp will do).

The standard symbols are M for "major", m for "minor", A for "augmented", and d for "diminished".

My guess would be that the "x" means "double-sharp", as the symbol looks like a fancy x. Since ♯6 would be F♯, I think it may be asking for Fx "F double-sharp".

o7 is doubtless diminished 7th. +6 is augmented 6th. x can be a double sharp, but there's no interval called a 'double sharp 6th'. Interesting that there's no major interval in the test. I wonder if the setter thought 'x' meant 'major'? (It doesn't.)

o7 refers to the 'diminished seventh' (so the E-flat you seemed to have erased was correct). The circle symbol is typically used in the context of chords. The x would be referring to augmented intervals/chords (F-sharp over the A-flat).

Most common is the following notation: M for major, m for minor, a for augmented, and d for diminished.

However, contrary to some other answers, +, -, x, and o are also used frequently (the circle is used in chords usually, so it is borrowed for intervals, and the x is sometimes used in fingered instruments to notate extensions and it also looks like a double-sharp (which, to be fair, is a feeble argument to use it, since augmented intervals or chords don't always have double-sharps)). I guess it just depends where you are studying.

Not the answer you're looking for? Browse other questions tagged guitar theory notation intervals or ask your own question.