Holding a violin against the hips?

Is there an official term for this type of stance? Are there any advantages or disadvantages to playing like this? Or, does it violate some kind of general violin posture rules?

I believe that in this case it is an affectation for the purposes of the video, c.f this live performance, where standard modern technique is used. Basically, I think that some combination of the artist and the director thought that it would look more archaic. There are indications that earlier Baroque technique would involve holding the instrument lower. And of course, the viol de gamba would be played with the instrument in the lap.

Overall, I find this posture most similar to how the nykelharpa is held; which is a significantly different instrument in that mechanical keys are used to stop the strings.

I've seen folk fiddlers hold the instrument like this - on the breast rather than under the chin. I agree, holding THAT low is probably artistic licence. 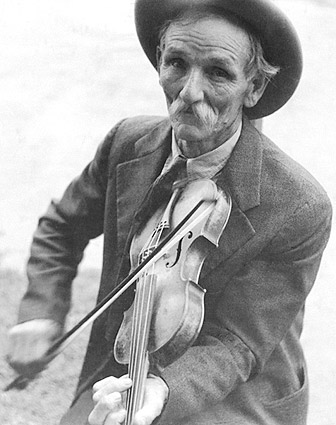 I can't imagine there is any justifiable advantage to playing fiddle like this. I'm not a fiddle player, but it seems like the left hand might have it's work cut out for itself, having to hold the instrument in a playable position while moving up and down the neck to land on the notes with any kind of precision. It reminds me of the old expression, sawing on the fiddle. I expect it would feel very much like trying to play guitar without a strap while standing, definitely not easy to do.

Not the answer you're looking for? Browse other questions tagged technique strings violin styles posture or ask your own question.