Is this pattern between Primary and Secondary chord notes important?

I recently noticed a pattern between the Primary (I IV and V) Chords and Secondary (II III VI VII) chords as they are further harmonized in 3rds all the way to 13ths.

Starting with the basic triads and arranging them into a chart, I broke down note counts in the two chord categories and got this chart: 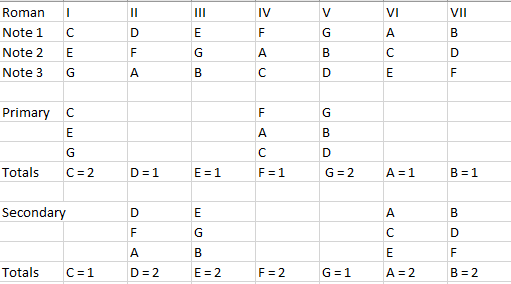 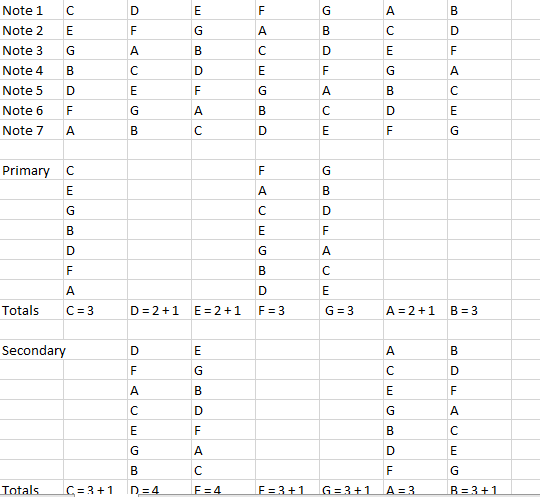 Is this pattern important in understanding something to do with why the I, IV and V chords ARE primary chords, and the II, III, VI, and VII chords are secondary?

P.S: I'm not sure if "Primary" and "Secondary" are the right terms to describe the 'I IV V' chords versus 'II III VI VII' chords. Sorry for any misunderstandings.

P.P.S: I know it isn't appropriate to upload pictures if the post wouldn't be clear without them, but posting these photos of the charts I made was the only way I could get the formatting right.

It's a counting argument. There 7 chord roots and 3 notes per chord giving. The most equal partition of 3 is 2 + 1 so some notes occur in 2 chords and some in 1. All these patterns are a consequence of laying out chords in thirds. Primary and Secondary are the correct names. Thus if a secondary chord is made into a dominant seventh type by sharpening the third and adding a minor seventh (at least in the major scales, these are names "secondary dominants." Example, D7, A7, and E7 in the key of C.)

A minor scale will show a similar pattern with the change being that the sharpened seventh is used for the V and vii chords. (The VII chord makes the minor mode a bit less symmetrical.)

14
Why do Major keys contain minor chords?
6
Chord progression if the chords are not part of the scale?
2
Why is the tonic chord of a key formed with the 1,3 and 5 notes of the key but the major chords in that key are the I IV and V?
3
Is this an imperfect authentic cadence in a minor key?
5
Determining the seventh chords of a key
1
Chord progression leading using B lydian (and others)
8
What are the diatonic extended chords of C major?
6
Letters m, n and v above roman numerals in functional harmony notation
3
What is the functional role of the subtonic chord?