What makes a song a “rock” song?

Sometimes I'm not completely sure when a song is a "rock song" or when it is from another music genre or even a "something-rock" song. How do you recognize it? Is it some bass rhythm? Some chord progressions? Some guitar picking pattern? The instruments? Some scale?

I find myself very confused with this. The rock in the 50's doesn't really have much to do with what people say it's rock in this days, and I even confuse some other genres with "rock" or "rock-something".

I liked a lot the music from Nirvana for example, and for me and a lot of people that was rock, until I discovered it was grunge which is a subgenre of a subgenre, inspired by other genres and so on...

Is there a way to recognize it by paying attention to some characteristic of the melody, or is it just the feel of it?

I looked in wikipedia and there are more than two hundred subgenres of rock, a lot of them mixed with other genres and stuff, so how do you know a song is a rock song, or that a group is a rock group?

Is there a simple or at least consistent way to know this?

Rock music is defined by rhythm, not melody. Rock is in 4/4 time with the heavy beats being 2 and 4.

Rock and roll in the '50s has exactly this in common with all of your "sub-genres" that you consider to be "rock" today. It's that simple.

I'm constantly amazed at how many people around the world today have essentially only listened to rock music all their lives and don't realize that there are many other kinds of music today and throughout history that don't use 4/4 time with the heavy beats on 2 and 4 at all.

The majority of Western music that is in 4/4 time, throughout history, has a different beat, where the heavy beat is 1, while 2, 3 and 4 are weak beats. (Examples are the whole of European classical music, contemporary Mexican pop music, like banda and norteño, of which there is a lot in my neighborhood, and dances like the foxtrot or tango). There is also a great deal of music in the world that uses time signatures other than 4/4, such as the waltz, in 3/4, or the minuet, in 6/8.

If it is in 4/4 time and you clap along to it on the 2 and the 4, then it's rock music, or one of other related forms with a broader history such as the blues, jazz, country, R&B (rhythm and blues), or gospel. All of these forms come down to us from the rhythm of African-Americans, whose ancestors exported this rhythm from its birthplace in Africa when they were forcibly relocated to the New World.

Genres and sub-genres of "rock" notwithstanding, they all have this in common: the predominant rhythm is 4/4 with the heavy beats on 2 and 4. That is why all these sub-genres are called "rock".

Listen to other kinds of music that have nothing to do with rock, and you'll understand that the world of music is vast, but that rock is a very narrow genre with a very short history that just happens to be really popular in your particular culture in the present.

This is really one of the most subjective areas in music, and one that individuals who follow a sub-genre get most militant about.

In my opinion, the only real way to do this is by comparison with other songs/bands in a particular genre. There are exceptions, for example Industrial - which has well defined descriptions based around the use of industrial noises sampled as percussion - but even this has a great deal of debate.

Even sites like rock.about.com have limited information on subgenres, and they use listings of bands in that subgenre as an indicator.

This image from Whitehotmagazine.com shows how complex the subgenre fields are: 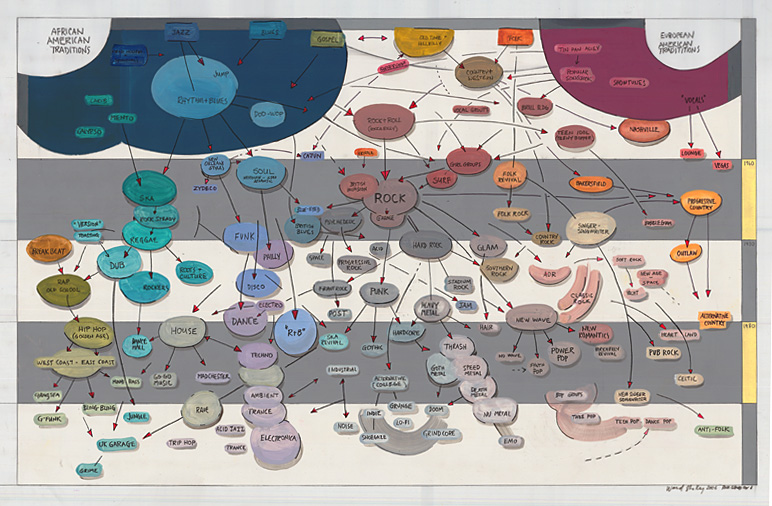 tl;dr - don't worry about it. If you really need to know what genre a particular song is, find out who played it and try looking on their website, or asking a fan.

(For those who really want to know - Metaltech is Industrimental - bringing together classic rock, techno, industrial, funk and metal... :-)

Defining "rock" through a checklist of features (4/4 rhythm, guitars, beats on 2 and 4, guitarists who trash bathrooms) is a fools' errand. For every possible item on that list, there are counterexamples, and usually you can even find counterexamples within the canon of rock classics.

Personally, I find it is better to think of Rock as a loose tradition, rather than a genre. Rock has existed for almost 3/4 of a century now, of course it's changed in that time. You'd run into the same problem of vague genre definitions if you tried to define how "classical music" sounds. Every step on the way from Blues Rock and Rock&Roll to the huge landscape of rock and metal genres we have today is small enough to appreciate how we got from here to there, but overall, it's like comparing an expertly crafted hole in the ground with a skyscraper. Of course, they do not seem the same - time has passed between the two.

A better way to define Rock, in my opinion, is along the lines of "I know it when I see it". There are certain elements and signifiers that are common in Rock, and when a couple of them come together in a song, that song probably is Rock. In the absence of these signifiers, it probably isn't. Some of those elements are: a drum kit, an electric bass, at least one guitar, maybe an organ or later a synthesizer, a vocal line which is prominent in the song and provides a lot of the song's melodic interest, a structure of tense verses and resolved choruses, aggressive timbres and dynamics, heavy beats, extensive guitar solos which focus on technical craftsmanship, vocal techniques that range from fairly standard singing to high-pitched screaming (cf. "Child in Time", Deep Purple) or low-pitched growling (too much Death Metal to list it all), and quite often some spirit of rebellion, be it against "the establishment, or be it against prevailing trends in music. This list is definitely incomplete, and certain subgenres may value some of those points more than others.

While Rock is often associated with being harsh, and with being simple music for idiots, both of these clichés are patently untrue. Rock can be a very gentle and emotional genre (a lot of Clapton's work would come to mind), and it can be very complex at the same time (cf. Dream Theater, or the aforementioned "Child in Time", or the entirety of Pink Floyd's "The Wall").

We also have to acknowledge that the influence of Rock goes far beyond Rock itself: While Lady Gaga certainly isn't a rock musician, and wouldn't claim to be, she lists Iron Maiden's Bruce Dickinson as one of her influences as a singer. No surprise there, seeing how vastly popular and completely inescapable Rock has been for the last 70 years.

I realize that this reads as "you're asking the wrong question", but the point is, there is no neat, simple answer to this question. People love simple answers, and there have been some, but sadly, none of them really get down to the heart of the matter.

I used to think that Avril Lavigne was rock and that Coldplay was pop, but it's actually the opposite. Avril Lavigne uses lots of guitars on her songs, sounds very close to rock'n'roll, but it's pop. And Coldplay, sound too pop for me, with much more piano/acoustic guitar than electric guitar. But it's still considered a rock band.

Wheat Williams said that rock'n'roll is defined by RHYTHM, heavy beats on 2 and 4 in a 4/4 time signature, but I'm sure I've heard this backbeat in pop music as well. If you listen to a pop song called Don't Let Me Get Me by P!nk, you'll hear that empashis on 2 and 4, with guitar, but still, it's not considered a rock song. And I've heard a rock song that doesn't follow that pattern, which the emphasis are on 1 and 3.

I believe it needs to analyse not only the song, but also the artist, the context. Even Dave Grohl (Foo Fighters) compared Billie Eilish to Nirvana, stating that "rock n roll is not dead". Billie's songs are heavily influences by rap. Sometimes ppl include Elton John on rock lists.

There is not a specific rule. Electric guitar is common, but there are rock songs. Attitude is another strong characteristic of Rock songs, but Beatles started with Love Me Do, which is not rock's "attitude".

In short: does it have electric guitar + attitude? 99% chance it is rock.

Air Supply and Slayer are both categorized as Rock. Rock, as a term, is meaningless.

Difference between pop and rock is that rock will have a few to many off beat chord changes through out the song, very simple. Those few or more changes happen between the 1, 2, 3 and 4 downbeats. Some bands like Styx may have a couple pop ballads for radio that are pop and have no offbeat chords or punches while the majority if their catalogue is rock with offbeat chords and punched. Although as some mention, the emphasis on beat 2 and 4 are a distinction, but the offbeat chords and punches are the key

Not the answer you're looking for? Browse other questions tagged rock-n-roll or ask your own question.

2
How to recognize rock music?

6
What are some 'Standard' first position rock chords?
7
What distinguishes Rock-n-roll from Rhythm-n-Blues?
5
What makes the 4/4 back-beat rhythm of rock-n-roll so compelling?
20
What is the history of considering Rock 'n' Roll to be “the Devil's music”?
3
chorus construction in pop and rock
2
Contemporary pop vs. early rock composition techniques
2
rock drumming (swing?) pattern