How to write in counterpoint for a sonata? [closed]

Ask Question
Asked 2 years ago
Active 2 years ago
Viewed 229 times
0
Closed. This question needs to be more focused. It is not currently accepting answers.

So yeah, just as it sounds like, I will be composing a sonata. It will be in the style of Beethoven. The first movement will be slow and quiet mostly. Of course I will be using dissonance such as a diminished 7th just like Beethoven did in his sonatas.

And there are several ways I could add drama to the sonata(which is crucial for a Beethoven style sonata) besides dissonance. Here they are:

But if I want to write a fugue, even if it is just a fugetto for a sonata, how would I go about doing that on just 2 staves? I don't know of any fugues with just 2 melodic lines(doesn't mean that couldn't be possible though). I think 1 of the reasons it was easy for Bach to write fugues is that a lot of them he composed for the organ which uses 3 staves(and at the time was 2 keyboards + foot pedals, some modern organs have way more than just 2 keyboards). I only have a piano and have rarely seen an organ in person. So I only have 2 staves to work with, 1 for the right hand and the other for the left hand. I'm probably going to have to use the sustain pedal in my sonata composition, but especially in the fugetto.

But how would I write in counterpoint? It seems so complicated even though you are using simple melodies to make a complicated piece.

Counterpoint is alive and well! We use it every time we make a decision about similar and contrary motion between a melody and a bass line, every time we echo a fragment of melody in an accompaniment.

But yes, the monumental contrapuntal 'set pieces' are a feature of the Baroque style. And if you look at the scores, you'll find that two staves were plenty for 3, 4, even 5-part counterpoint playable by two hands on a keyboard. 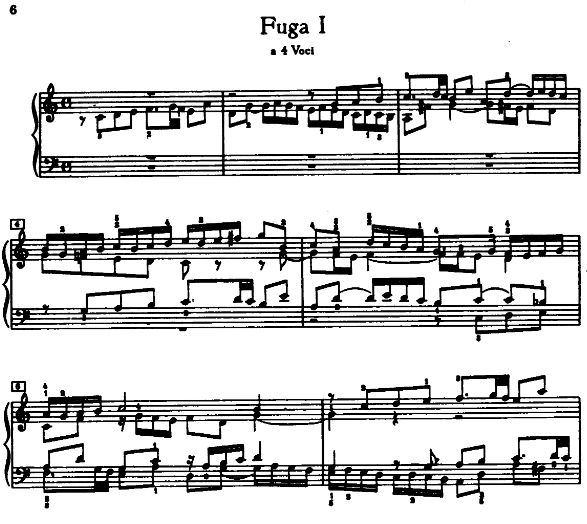 But I wouldn't start there. Look at the 2 and 3-part Inventions. Plenty of counterpoint, without the formal requirements of a fugue.

(Note, however, that if you're attempting a Beethoven pastiche, although counterpoint certainly IS characteristic, going into a full-blown fugue isn't really.)

Not the answer you're looking for? Browse other questions tagged composition counterpoint fugue sonata or ask your own question.