Is there any compendium mapping chord progressions to mood and sentiments? [closed]

Came across an Android app that enlists chord progressions with a mapping to mood or sentiment that it conveys (or expected to convey, I presume to certain audience). For various reasons, I am bit wary of apps of this nature, unless there is a certain body-of-knowledge that backs up the content of such apps. Therefore, I am wondering if there is any compendium, list of chord-progressions (on various keys), that have a "generally accepted" association with the mood or sentiment ?

Here is a screenshot of the mapping found in the Android app, to sentiment / mood. 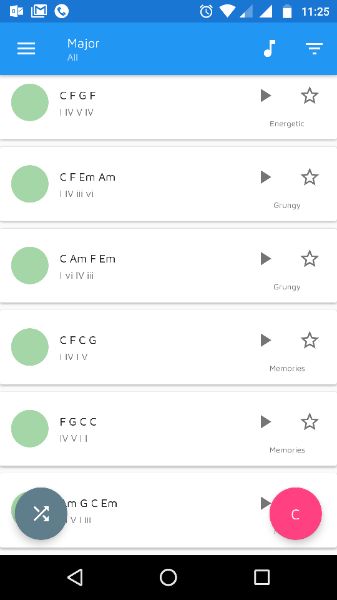 Another example of notion of mood of song is embodied in Microsoft Songsmith, although I do not claim that the mood selection results in selection of specific chord progression (or melody) that is pre-crafted by a human (and known to human ear as meeting expectation of the mood). It is a relevant example, IMV, because it alludes to existence of mood of music.

Also is such mood association to do with culture and musical conditioning of the listener ? For example, what is considered as dark-n'gloomy as per people who have been widely exposed and thus conditioned to Western music, may possibly be considered as bright-n'peppy as per people condition to say African or Arabic music ?

Finally, there is this other Music-SE Q&A where the accepted answer indicates body of research that is attempting to establish classification of music on various factors that set the mood. So, isn't it possible that Chord Progressions (apart from Chords themselves) have a role to play in setting the mood of a song ?

I don't know why the question was downvoted, I found it quite interesting.

Each culture listens to music completely differently from one another. Each one has developed it's own patterns and instruments and ways of playing music. So people from different cultures will have very different emotions when listening to the same song. When you hear Arabic stuff in Arabic scales, it sounds exotic and mysterious, but for them it could sound regular and featureless (I'm just speculating, this is just an example). Actually, each person has it's own musical experience, but I think they have enough in common, so that we can group them in cultures. Having said that, let's consider Western Music only, since it's what we know.

I agree with all the comments saying that it's not the chord progression that creates mood, but a bunch of aspects together. But take Vb9 imaj7 for example. There is not one single person that would say this sounds happy. Most would agree it's sad and dark. So chord progressions alone do have an impact in mood.

It's hard to describe your mood by just listening to a chord progression in most cases, so I don't think there is such list of chord progressions, and if there were, it would be probably opinion based, like this app.

Though, I think it is possible to figure out if some chords do create the same mood in most people by doing some experiments. For example, imagine someone listens to a chord progression and must choose which image represents it better, between a few options. I bet Vb9 imaj7 would be 100% associated to a funeral. But C F C G might be very dispersed, for example.

So, to know for sure if you question is answerable, either you find some one who did something like this and published his results, or conduct some experiment by your own (who knows..). I think anything other than this would be opinion based.

Not the answer you're looking for? Browse other questions tagged theory composition chord-theory chord-progressions or ask your own question.

12
Are there any classification systems that categorize music by mood?