How to find to the right strings of a barre chord by feel?

I'm practising (only having trouble with) the "A" to "B minor" chord change.

My difficulty is finding it (the strings for Bm) fast enough -- i.e. to complete the chord change from A to B minor in less than about half a second.

I can play Bm fine once I get there -- now I can change chord from A to Bm reliably in a bit less than one second, if I look at the strings.

I think my trouble is finding the right strings (i.e. index finger on the 5th string, middle on the 2nd, ring on the 4th and pinkie on the 3rd) -- unless I'm careful (and slow, and look at and adjust what I'm doing) my fingers go on the wrong strings, too high or too low.

I think the reason why I don't have that or any trouble with other (open, non-barre) chords (such as G, D, C, A, and E) is that my thumb is on the edge of the neck (i.e. on the top of the neck when the neck is horizontal and facing forward), so I position my fingers by feel relative to where the thumb is anchored.

However for a barre chord, my thumb is on (it moves to) the back of the neck (i.e. somewhere behind the neck as you look at it), it's moving (from the edge for the "A" to the back for the "Bm"), and thus isn't a reliably-positioned anchor relative to which I can position fingers.

How or relative to what do you position fingers and/or thumb and/or the hand on the neck, when moving to a barre chord?

I'm using a steel-string acoustic guitar (with the neck at about 45 degrees from vertical, standing and with a strap).

I've seen YouTube videos on how to make the barre chord shape, which give tips on how to press the index finger, position the elbow and the thumb -- but I don't know one on how to find the right strings quickly.

To be clearer about what I think the problem is: having practised, I more-or-less know and easily find the hand shape for the chord, what I can't find quickly is the hand position relative to the neck.

Consider these photos for example (take from here and here): 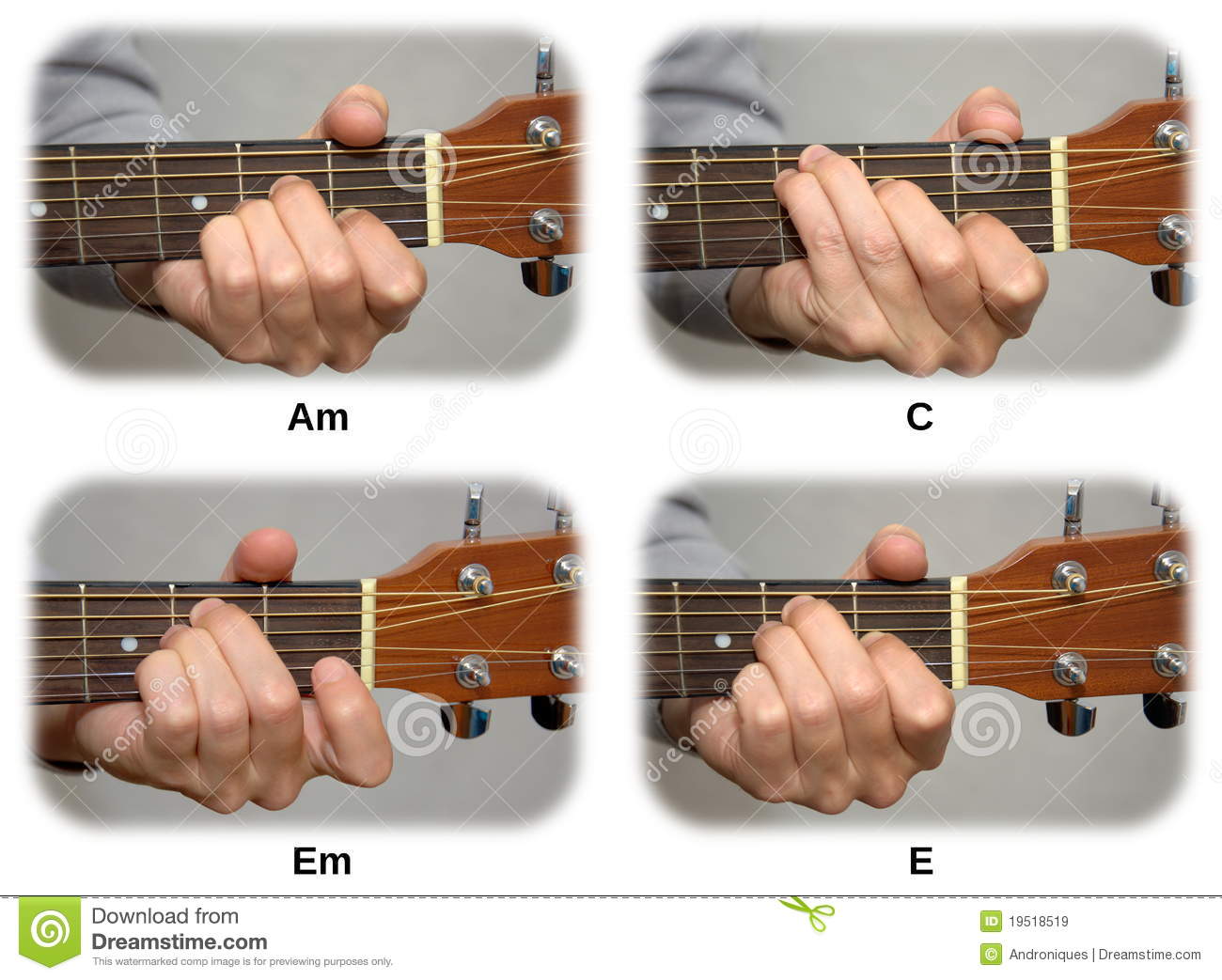 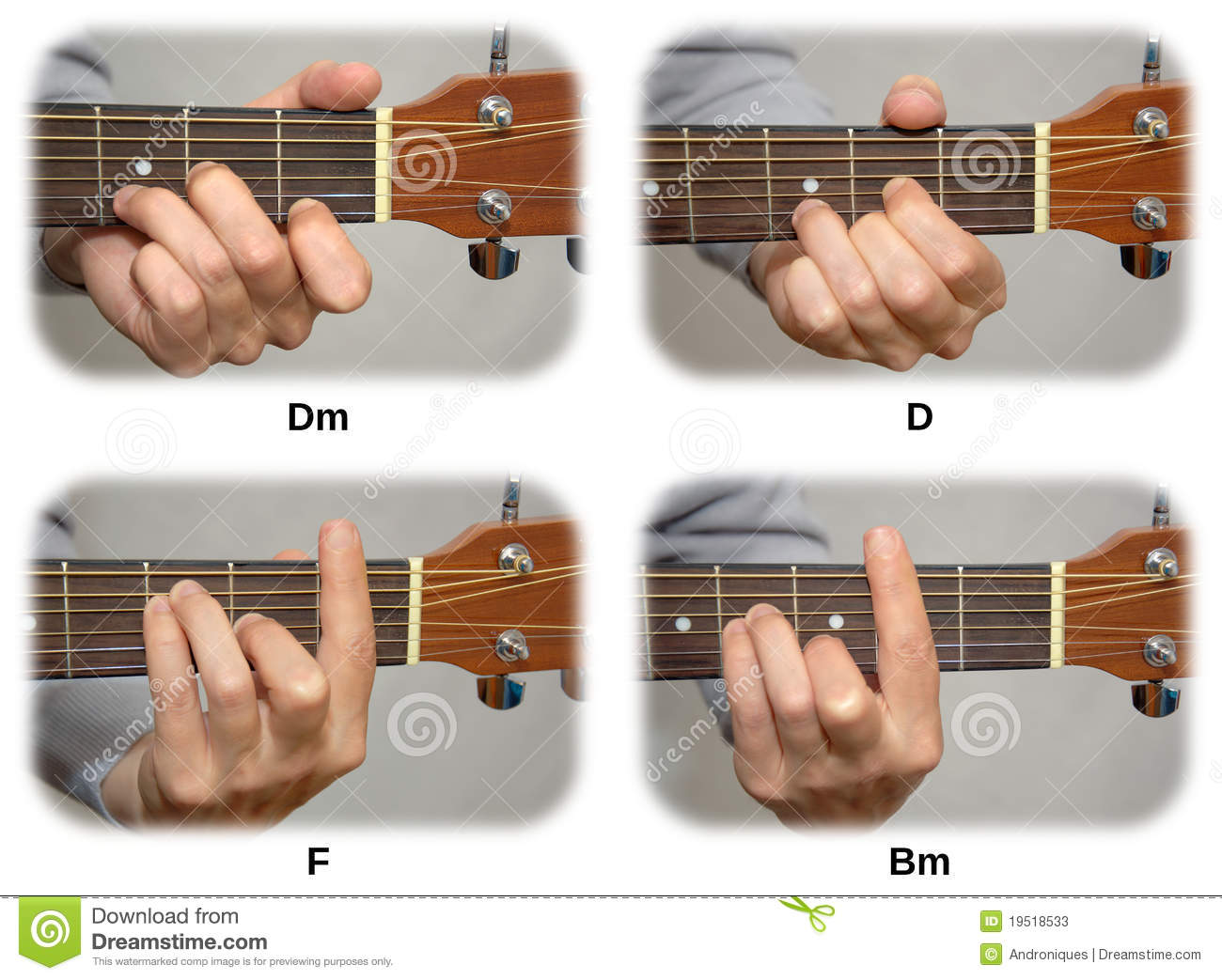 For the open chords, the thumb is on the edge of the neck, so each finger can find their string by feeling how far each finger is from the thumb.

Also the lowest portion of the index finger may be touching the other edge of the neck (which again gives tactile feedback about the position of the hand relative to the neck).

Whereas in the two barre chords i.e. F and especially Bm, the thumb is round the back -- and the back is smooth, rounded, featureless -- so the whole hand is lost in space, and doesn't know where it is relative to the neck.

The hand is moving a lot, too, for the transition: fingers are pointing almost vertically down the neck (all lined up on the 2nd fret) for the A chord, and horizontally across the neck (on the 2nd through 4th frets) for the Bm. For the open chords at least the thumb is in a more-or-less constant position, a kind of anchor.

Try using a method I find works with students. Put your fingers on the Bm shape, play to check. Take your hand off about 20mm, keeping the shape exactly. Then hammer everything back on Do it all in slo-mo the first 20 or so times, but each time, even if you can't make the whole chord sound just by hammering on, strum it. This imprints the shape of the chord into your hand, and eventually you'll think 'Bm', and the whole hand will morph into the appropriate shape. It's called 'practice', but it's targeted practice.

Based on your description you are holding the neck incorrectly. Thumb should be behind the neck not at the edge. So you have created your own problem. In addition to that there is no easy fix all for "finding a chord". It takes practice!!!!!

You state that you can get from A to Bmin if you do it slowly. Then practice slowly until it feels natural then speed it up. Learning the guitar involves programming your nervous system to remember the feeling of each chord and each distance.

One thing that may help is how you're playing the A chord just before it. If you bar the second fret and play the 4 middle strings you don't have to move to be in position for the Bmin. This is a common method for open A modern guitarists use on electric guitar, but probably not the preferred method.

I found a video ("Tip on how to do "Bm" Chord or transition to Bm") which recommends using the middle finger as an anchor: if the middle finger is in place (on the 2nd string) then the other fingers fall into place.

To get to Bm from there, the middle finger stays (anchored) on the 2nd string, simply slides down one from the 2nd fret to the 3rd fret, and other fingers fall into place (in the Bm shape) around it.

6
How do you play a barre chord (or a chord with 4+ strings)
3
How can I hold a barre chord for a long period of time?
5
What are the correct mechanics for a guitar F barre chord
12
Barre chords kill my thumb!
2
Problems with holding Barre Chords
2
F barre chord on an SG guitar
11
Should I avoid using my index finger on non-barre chords?
3
Barre Chord Problem Higher Up the Guitar Neck
3
Best position for play Power Chords standing
3
A very specific bar chord problem