Does the harmony change in this part?

In the circled part, does the harmony change to ii or is the D an échappé (escape note) to the dominant? 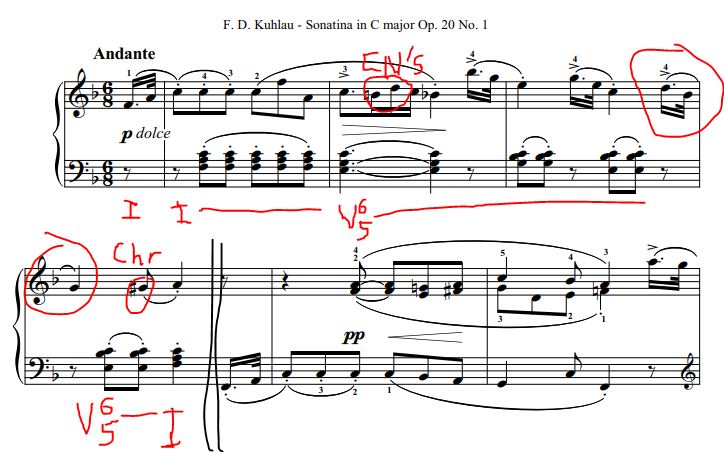 I don't think the harmony changes; the V65 is still in play until the second half of m. 4. Viewing the D as a move to ii would indicate a motion from V–ii, which is a really uncommon progression in this style.

Some may choose to analyze that D as a part of a larger V9 chord (C E G B♭ D), but since it occurs so briefly, I think it's best to analyze it as a non-harmonic tone.

As such, you're correct in calling it an escape tone. Other labeling systems could call this an incomplete neighbor or even an appoggiatura, but they're all saying the same thing: it's approached by step from the chord-tone C and left by leap, in the opposite direction, to the chord-tone B♭.

1
4 part harmony chords
2
Does the dominant chord change its function if you add 11th interval?
2
Harmonic Analysis of Chopin's etude op.10 no 5
9
Do 4-part harmony rules also apply to piano arrangements?
2
Do melody notes over chords basically change the underlying harmony and the chord extension?
3
Are these upper voices in this final passage from Handel a bona fide F7 chord or some kind of non-chord tones?
1
Constraints for doubling upper voices in 4-part harmony
4
Does tempo affect use of non-harmony notes?
2
Four part writing: Does quality and amount of dissonances affect use of non harmony notes?