Are there any alternatives for the resolution of the leading tone rather than to the tonic?

If we are not making the vii/ leading tone resolving to the tonic, then how can I make the transition of vii chord to iii without being too awkward with the voicing? Do composers make it natural minor form to reduce the effect of leading tone that tends to be resolved? E.g. In the key of Bm, the transition of A# (is the chord consisting notes of A#, C# and E?) to D maj ; what can be done in the transition to make it better and not too weird and sudden?

If you want to spell a chord as A# major, its notes will be A#, Cx (that's a double-sharp), E#. (Which is why we more usually go with calling it Bb major :-)

So now we've got the right notes for A# major, we can talk about how to get from it to D major. (I know you based your question round a misapprehension of the notes in an A# triad, you were really asking about A#dim. Which acts like F#7(b9). But it could be interesting to address the literal question!)

You're right, VII - iii isn't a very natural change. III, (D MAJOR in B minor) is the relative major, so close to Bm that it's hardly a change at all! But you want to get to D major.

It would be smoother to use the standard 'to get anywhere, plonk its dominant in front of it' technique and use bVII7 (A7). But 'smoothness' isn't everything, 'dramatic' is good too!

Here's some things you could do, depending where you want that D chord to take you. Chromatic inner lines and contrary motion can get you through a lot of 'weird' changes. And look at the alto line in the third example. Do something that might feel a bit awkward, then do it AGAIN! 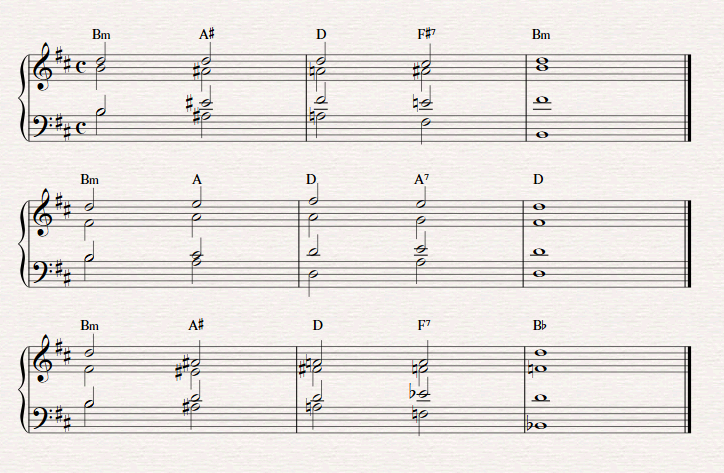 Not the answer you're looking for? Browse other questions tagged chords harmony or ask your own question.

3
Are there any pre-20th century examples of an augmented 6th chord with a leading tone?
2
Trouble writing chord progressions in minor
6
Letters m, n and v above roman numerals in functional harmony notation
5
Minor Key (and other key?) Roman Numeral Analysis
0
(REVISED): Roman Numeral Analysis of Fuchs- 'Mother Tells a Story'
6
How to compose better chromatic harmony
2
How is D7 functioning here? Applied chord both kind of does and doesn't fit
0
Why does the iii chord function as a tonic chord if it has a leading tone?
1
In A natural minor what are the tonic and sub dominant family chords?