I was recently looking through Bach sheet music to find something new for training and I found BMV994 which made me a bit confused: 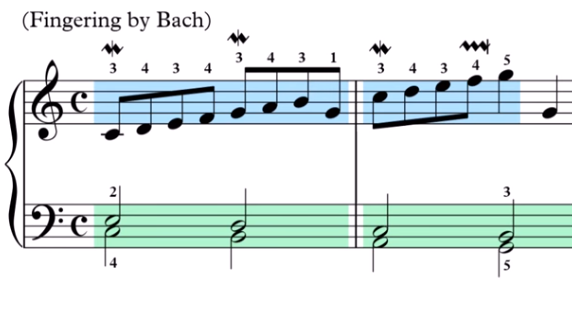 This does not look like any "modern" fingerings I have seen. I have following questions:

Your mistake of thinking is, that in Baroque music (and in classical music, and mostly even in romantic music), the standard articulation is non-legato. You only shall play legato if there is a legato-bow or some strong indication.

Do not forget that, there are also some piano-technical aspects:

Now to your questions:

But even does not mean legato in the sense that later piano technique uses the term.

On instruments like the harpsichord and organ, with no dynamics, articulation is the most important tool the performer has to define rhythm. Playing everything "legato" on a harpsichord (or even worse, on an organ in a building with a very resonant acoustic) simply produces a shapeless mush of sound.