How does 'meter' differ from 'rhythm' in music?

Many human activities, such as running, walking, or dancing, produce distinctive rhythms, which are often reproduced in music. Rhythm involves not only the positioning or spacing of notes in time, but also their duration, and both of these can be notated in Western music (see p.15).

The pulse (commonly known as the “beat”) is a regular unit of time around which the rhythm of a piece is organized. In a march, this would be the position in time of each footstep. The composer decides whether the pulse should be a half or a quarter, or any other note value. The speed of the pulse is the “tempo” of the work. Most composers have used Italian terms (see p.14) to indicate tempo.

The meter corresponds to the grouping of the pulse. Much Classical music is grouped in twos or threes. Each group is known as a “measure” or “bar” and in notation is separated by a “barline." The meter is indicated by a “time signature,” such as 3/4. The top number shows the number of beats in the measure, while the lower number shows the value assigned to each beat.

[p. 463] meter: the gathering of beats into regular groups

[p. 465] rhythm: the organization of time in music, dividing up long spans of time into smaller, more easily comprehended units

Rhythm is arguably the most fundamental element of music. Its primacy may result from our experience in utero; we heard the beat of our mother’s heart before we were aware of any sort of melody or tune. Similarly, our brain reacts powerfully and intuitively to a regularly recurring, strongly articulated “beat” and a catchy, repeating rhythmic pattern. Pop music derives its power primarily from the way it stimulates in the brain a direct, physical response to rhythm. We move, exercise, and dance to its pulse (Fig. 2.1).
The basic pulse of music is the beat, a regularly recurring sound that divides the passing of time into equal units. Tempo is the speed at which the beat sounds. Some tempos are fast (allegro) or very fast (presto) and some are slow (lento) or very slow (grave). A moderate tempo (moderato) falls somewhere in the range of 60 to 90 beats per minute. Sometimes the tempo speeds up, producing an accelerando, and sometimes it slows down, creating a ritard. But, oddly, we humans don’t like undifferentiated streams of anything, whether they proceed rapidly or slowly. We organize passing time into seconds, minutes, hours, days, years, and centuries. We subconsciously group the clicking of a seatbelt warning chime into units of two or three “dings.” So, too, with the undifferentiated stream of musical beats, our psyche demands that we organize them into groups, each containing two, three, four, or more pulses. The first beat in each unit is called the downbeat, and it gets the greatest accent, or stress. Organizing beats into groups produces meter in music, just as arranging words in a consistent pattern of emphasis produces meter in poetry. In music each group of beats is called a measure (or bar). Although music has several different kinds of meter, about 90 percent of the music we hear falls into either a duple or a triple pattern— duple meter or triple meter. We mentally count “ONE-two” or “ONE-two-three.” A quadruple pattern exists as well, but in most ways our ear perceives this as simply a double duple.

The time, or temporal (horizontal), aspects of music and the pitch (vertical) aspects of music are intimately intertwined and complement each other. This chapter concentrates on the essential concepts and terminology related to temporality. First, some basic terminology. Undifferentiated (e.g., same quality, loudness, and length) and equally spaced clicks or taps are called pulses. When you nod your head or tap your foot at a steady rate when listening to music, these pulses are called beats, because they now occur within a context that differentiates them; for example, some beats feel stronger than others. The tempo is the speed of the beat; that is, how fast or how slowly you nod or tap. Meter refers to the grouping of both strong and weak beats into recurring patterns. Rhythm refers to the ever-changing combinations of longer and shorter durations and silence that populate the surface of a piece of music. Rhythm is often patterned, and rhythmic groupings may divide the beat, align with the beat, or extend over several beats. The following discussion proceeds from temporal events that take place on the rhythmic surface of a piece to the metric grid that regulates the rhythmic surface.

There's one word that clearly distinguishes these two concepts, and I'm a little stunned it doesn't appear in any of your sources: hierarchy. (Edit: Although I see Dom's answer at Music Fans uses this term!)

Meter is a hierarchy of beats. Such a hierarchy determines which beats are emphasized (though authors vary on how they define "emphasis" here), the subdivisions of the beats, and so on. Some theorists claim that meter must be a regularly recurring pattern of one hierarchy, but that's a distinction that we don't need right now.

But rhythm has no hierarchy; not accounting for any accents added by a composer, rhythm is an undifferentiated sequence of articulations and durations.

Imagine you have three eighths notes in a row: 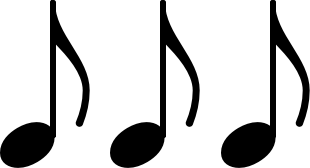 With the pattern beginning on beat one:

With the pattern beginning on an eighth-note anacrusis:

And with the pattern beginning on beat four:

These examples show that it's only when those three eighth notes occur in a given meter that you begin to form opinions about emphasis.

Once you're aware of this distinction, it's hard for me to imagine anyone confusing the two.

If you're interested in reading another source, I highly recommend Justin London's Hearing in Time.

Although the terms are used interchangeably, in the strictest, most distinct sense of the word, rhythm is groups of notes of different duration, while meter is the overall "feel" of a song as far as which beats are accented and unaccented.

For instance, a dotted quarter followed by an eighth followed by two sixteenths is a rhythm, but meter has more to do with the time signature. For instance, you might say that a song has a triple or "three" (ONE-two-three, ONE-two-three) meter, even though there may be subdivision like dotted notes, eighths, sixteenths, or triplets in the actual rhythm of the melody. 6/8, 4/4, 3/4 and such refer to the meter of the song, whereas rhythm refers more to the duration of individual notes or groups of notes in the song.

This is how I would differentiate between the two. Hope this helps!

'Meter' is the time-signature. Maybe constant, maybe different every bar.

'Rhythm' is the notes. Maybe there will be repeated patterns, maybe not. It's still rhythm.

'Meter' is the framework we hang rhythm on to.

I'm impressed by how complicated an explanation of this can be made!

A meter describes a scale of pulses within a measure. A rhythm is a distinct pattern of pulses regardless of the scale and measure length.

In many cases the rhythm has a recurring pattern that fits the measure length, whether syncopation is used or not.

If a second rhythm is played next to the 'main' rhythm, we could see the difference between meter and rhythm more clearly.

We could distinguish between:

A. no polyrhythm, no polymeter

Consistently with others' replies, my own runs:

Rhythm denotes an entirely general attribute of sequences of musical sounds (and also of sequences of actions of any kind) that emerges as they are experienced in succession with the passage of time. Specifically, the term rhythm refers to any discernible regular characteristic of a succession of sounds, whether it be simply a constantly maintained or alternating pulse, the experienced subdivisions and multiples of a given pulse, or any recognizable grouping-effects that emerge as the result of how the durations or pitches of sound-sequences have been intentionally or unintentionally organized.

Meter is a specific rhythmic manifestation of the last-named kind, emerging as the effect of having organized the successive durations of sounds in some cumulatively conceived, regularly grouped and recurring manner.

4
How do time signatures relay information on the grouping of beats?
0
How to find the most correct meter of a riff or phrase
2
How should I distinguish between syncopation or un-metrical rhythm?
0
Can we use any note without caring much on rule of particular meter as long as note value fits in the meter?
2
How do 'meter' and 'rhythm' affect the choice of 'Polymeter' and 'Polyrhythm'?
12
What exactly is a beat in sheet music/music?
6
Is 5/4 simple or compound?
7
Is 7/8 an example of measured rhythm or metrical rhythm?
14
Just how specific is the term "hemiola"?
1
what is a "rhythmic gesture"?