step-wise vs. circle of fifths movement in bass line

This post got me thinking about root movement. It has been said time and again that root movement of an upward fourth and descending fifth are particularly satisfying, and obvious choices when working towards good voice leading. But are there situations in which a bass that moves by step is more appropriate? Sequences like the one below are what mostly come to mind (C maj): 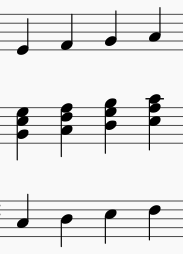 But I can think of other examples . . . what about the chorus of Changes by David Bowie?

It looks something like this (also in C maj): 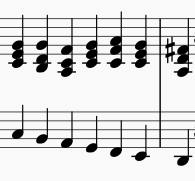 And it certainly is amazing. But wouldn't traditional music theory have pushed him to write a bass line that looks more like this (forgive me if this doesn't look pretty): 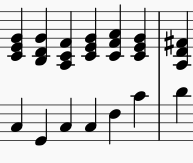 If anyone could elaborate on this concept (namely, the various effectiveness of stepwise bass vs. bass lines that follow the circle of fifths), then I would be very appreciative.

You can try turning this question around and see how voice leading paradigms result in the different root movements.

Basic voice leading holds common tones between chords and moves the other voice the smallest distance to the tones of the other chord.

With triadic harmony there are only 3 possibilities for moving the voices: move 1 voice, 2 voices, or 3 voices.

When those basic rules are put together we get chord progressions whose roots move by descending/ascending 5th, 2nd, and 3rd... 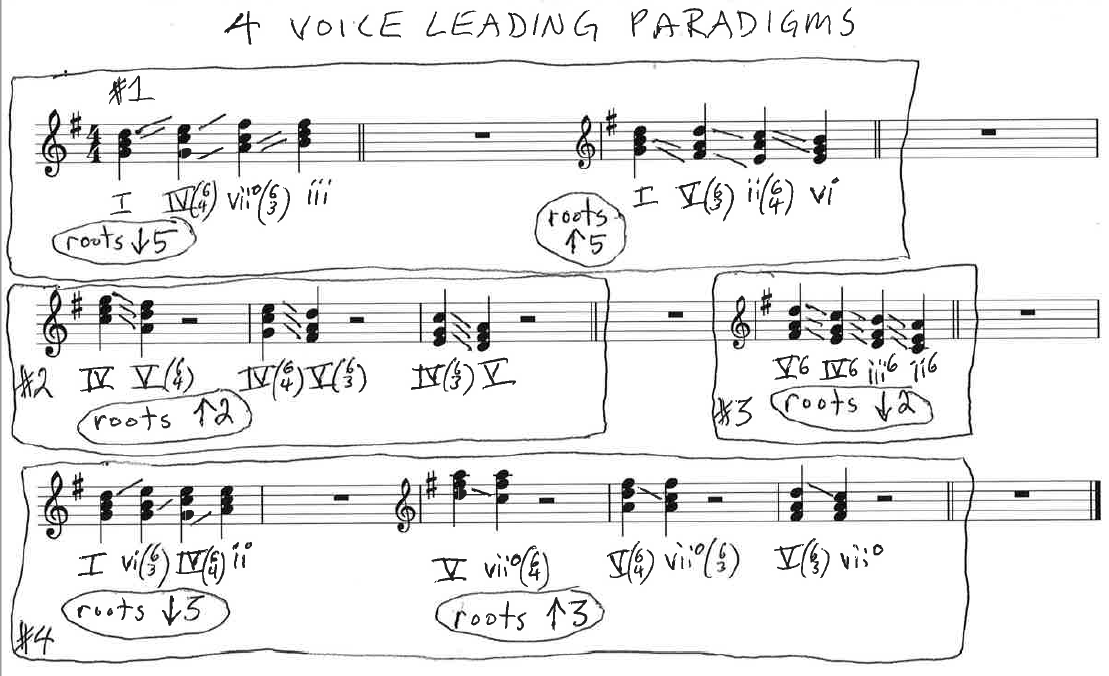 In my notation I put a line between notes of the moving voices to show the relative motion and position.

I put inversion figures in parenthesis to show that all these progression types - except #2 roots by descending 2nd, parallel sixth chords - can be used over root position bass parts.

Back to the original question...

...root movement of an upward fourth and descending fifth ...are there situations in which a bass that moves by step is more appropriate?

Part of the problem is the question sort of switches back and forth between bass motion in terms or root and actual tones. Keep in mind that the tones the bass plays are not necessarily chord roots. In the four paradigms above the bass is a root position (except type #3) but the actual bass voice moves variously by descending/ascending 5ths and 2nds, as well as 3rds.

...if you examine the harmony you will see that while the bass movement is entirely step-wise the roots are almost all descending/ascending 5ths.

There is a complete mix of possibilities bass movement by step and leaps and chords in root position or inverted.

Not a lot to say except that yes, V - I bass lines are good and strong, and so are stepwise ones. I wouldn't consider 'traditional theory' preferred one or the other.

Motion by fifth is much easier to manage in four voice harmony, if you are following the western-tradition voice leading rules. But stepwise motion is possible, with some caveats.

Stepwise motion with the root in the bass is problematic because it will usually result in parallel fifths, which are forbidden (and all over the place in your first example, by the way). In a typical IV-V progression, the upper voices move in contrary motion to the bass in order to avoid this. Just going up continuously is very difficult.

Stepwise motion is also do-able with the third in the bass, and doing this continuously is sometimes called parallel sixths. When voice leading with parallel sixths, you can even discard the customary predominant-dominant-tonic ordering, because it is considered sequential instead of progressive harmony.

Another possibility is stepwise motion in the bass where the bass note alternates in function. For example, Pachabel's Canon is written as a descending bass line where every odd-numbered chord is in root position and every other chord is in 63 position. This results in the sequence I V VI III IV I, which you may recognize from a whole bunch of other songs. This sequence is sometimes called "Descending 5-6 syncope" because it descends and alternates between 53 and 63 chords.

There are ascending versions as well (for example, Tiptoe through the Tulips).

But just straight chords up and down the scale with the bass in the root? Pretty rare. From a voice-leading perspective, very hard to pull off.

Not the answer you're looking for? Browse other questions tagged chord-theory bass-voice or ask your own question.

9
When to use inversions in harmonizing a bass line

7
Relation of the diminished chord to the circle of fifths?
6
Bass line melodies
1
Using Circle of Fifths to compose in Minor keys
3
Expansion of the Tonic
4
Stepwise bass movement/intermediate (passing) harmony technique
4
Harmonizing in fingerstyle with a bass line